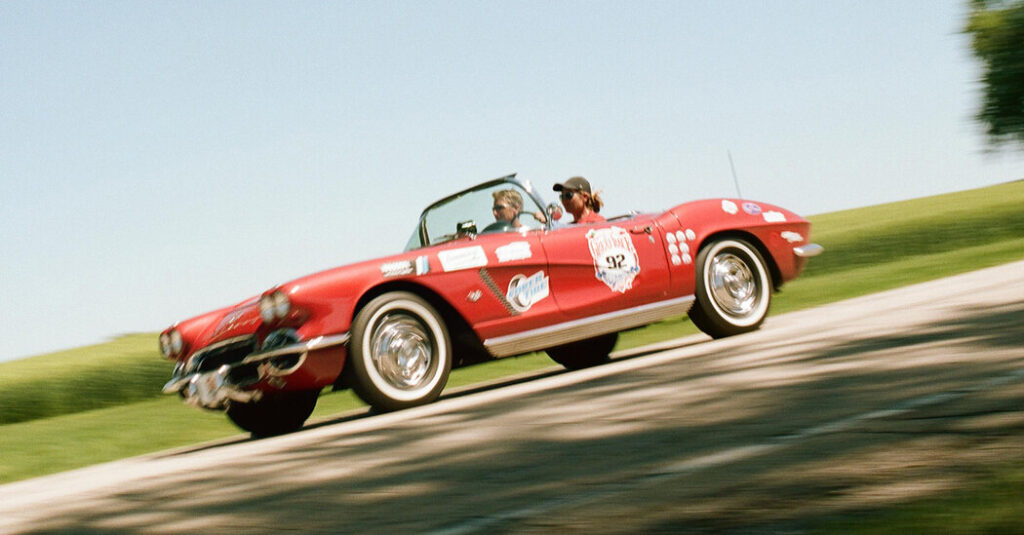 
FARGO, N.D. — It’s a nine-day classic car parade, stretching over 10 states and 2,400 miles, with vintage vehicles, some more than a century old, leapfrogging across much of the United States. More than a hundred teams took part in the event in June, known as the Great Race, tracing a route from Rhode Island to North Dakota.

A Time-Speed-Distance, or T.S.D., rally, the Great Race began in 1983 and follows a new course every year. Competitors must drive each segment of the precision-based event in a specified time, at a specified average speed. This year’s iteration started in Warwick, R.I., and finished in Fargo, N.D. The East Coast’s rolling hills and jammed roads gave way to the lush flatlands and cornfields of the Midwest. The newest car to tackle the race was a 1974 Plymouth, while three 1916 models — two Hudsons and a Chevrolet — shared the mantle of the oldest.

The aim of the Great Race, said Jeff Stumb, the event’s director and an auto enthusiast, is to “get old cars out of the garages and museums and get them on the road.”

The event is loosely based on the 1965 comedy “The Great Race,” starring Tony Curtis and Jack Lemmon, which took cues from a race in 1908 from New York to Paris, a harrowing event in which six international teams took 169 days to race 22,000 miles.

This year, the RPM Foundation, a nonprofit that provides grants and other resources for young people interested in vehicle restoration and preservation as well as mentorship opportunities, fielded a team of five women — two student navigators and three adult driver-mentors (including this reporter).

Nick Ellis, the foundation’s executive director, assembled the team. According to Mr. Ellis, women make up less than 10 percent of the automotive work force.

“In conversations I’ve had with auto shop teachers across the country,” Mr. Ellis said, “I hear over and over again how the relatively few young women in their classes are every bit as capable, if not more than, their male counterparts.”

There needs to be “examples of challenges to this perception,” Mr. Ellis continued. Young women need to “envision themselves behind the wheel of a racecar, sanding a fender, holding a wrench, etc., if we’re going to be successful in revitalizing this industry.”

So, in June, our newly assembled student team took off from Rhode Island, joined by a cherry-red 1966 Ford Mustang, which was on loan from the LeMay car museum in Tacoma, Wash.

Our drivers included Sabré Cook, a 28-year-old professional racing driver and mechanical engineer, and Mallory Henderson, a seasoned Great Race navigator who was getting behind the wheel in the race for the first time.

Ms. Henderson, 24, and her father, Scott Henderson, were hometown representatives of the final city of 2013 Great Race, which ended in Mobile, Ala. They have since become a mainstay of the event. In 2018, when the brakes of competitors in a 1955 Buick failed on Mount Washington, in New Hampshire, Mr. Henderson rescued the team by using his own car to stop the runaway vehicle.

Our student navigators were Olivia Gadjo, 20, who recently graduated from Alfred State College in New York with a degree in motorsports technology, and Kinzie Wilson, also 20, a student at Belmont Abbey College in North Carolina who is set to graduate in December with a major in motorsports management and a minor in digital sport media.

Ms. Gadjo, who plans to take more courses on motorcycles and welding, is restoring a 1988 Ford Bronco II that her uncle gave her. Ever since Ms. Gadjo’s transmissions teacher, Mike Ronan, told her class about the Great Race, she had hoped to take part in it. “I was ecstatic and saw it as the opportunity of a lifetime,” she said.

Ms. Wilson got her first job in 2020 with the NASCAR and Mario Andretti Racing Experience while finishing high school and starting college. She has worked nearly every on-track position.

“I bought my first car, a 1996 Corvette, when I was 13 and immediately took it to the drag strip,” Ms. Wilson, who is from Mansfield, Texas, said with a grin. “I explored the world of racing by trying out almost every type of racing I could.”

“After graduation, I’m hoping to find a job in Europe,” Ms. Wilson added. “My grandmother was born and raised in Italy before coming to America. It’d be very cool to work in Italy. I want to work for either Formula 1 or a car manufacturer.”

After introductions but without any of the in-person training a typical Great Race team often benefits from, we were off. Success came early, with an “ace” — a perfect score — on the first day’s practice run, earned by completing the segment in exactly the correct time. But so, too, did mechanical issues with the 56-year-old car.

“Almost every day of the race our team had one plan,” Ms. Wilson said, “and the car had a completely different one.” Gracie, a nickname we gave the ’66 Mustang, had a “love-hate relationship with the team,” she added.

“Gracie broke down, stalled multiple times and lurched when she wasn’t happy,” Ms. Wilson went on. “Each time, we did what we had to, to keep her running and over the next day’s finish line.”

Doing what we had to do was a lot of work, she added: “We were in the engine bay for hours rebuilding the carburetor, putting an electric fuel pump in, replacing the spark plugs and more.”

Ms. Gadjo appreciated working as part of a team. “Everyone has a strength that benefits the team,” she said. “It’s about the team as a whole and not individual moving parts.” From her teammates she learned to be confident in her abilities and to not let anyone make her second-guess herself.

“We also dealt with lots of teams, and even fans, talking down on us because we were an all-female team,” Ms. Wilson said, adding that people would ask, “Did you girls really drive?” But, she said, “it only pushed us to work that much harder to make it to the finish line.”

Despite these digs, the larger response was overwhelmingly positive. Dylan McCool, a YouTube star, and Rowland George, a senior advertising executive at Hemmings Motor News, a monthly magazine centered on classic cars, along with Bryan Vanzandt, one of the outlet’s social media influencers, fought overheating and vapor locking issues on their 1969 Chevrolet Chevelle SS but helped us diagnose our accelerator pump leak and otherwise gave us encouragement.

However, the bulk of the wrenching was done by us, the RPM Foundation women. Two moments stood out for Mr. Ellis. First: The team’s willingness to “tackle one of the most complex mechanical procedures — rebuilding a carburetor — in a parking lot in the middle of the night with only hand-held lights to illuminate their work.”

Second: The next night, the team’s newly installed mechanical fuel pump failed, and the Mustang had to be towed. “The team was tired and sleep deprived from the long day and the late-night rebuild the night before,” he said. “So, I offered to them to all go to sleep while I installed an electric fuel pump. Every one of them stayed to help with the repairs.”

Two teams from Auburn, Ind., sponsored by the National Auto & Truck Museum and the Early Ford V-8 Foundation Museum, helped another ailing team swap its transmission in a late-night, parking-lot surgery three days after one of their cars lost its own.

With this many classic cars covering this much ground, mechanical mishaps and parts problems were prevalent.

Still, volunteers helped the Great Race run smoothly for the 550 people who participated. “We started with a record number of teams: 130,” Mr. Stumb said, and “111 finished the event nine days and 2,400 miles later.” We were one of those teams, taking 90th place.

The Great Race’s motto is: “To Finish Is to Win!” It’s a testament to teamwork, collaboration and old-school know-how.

“To stick with their car when they’ve been given the option to rest instead shows enormous grit and dedication,” Mr. Ellis said. “I could not be more proud of our team.”

The RPM Foundation will become a permanent fixture in the Great Race X-Cup segment, Mr. Ellis said. He plans to recruit new teams to compete.

“Women should consider the auto industry as a career because there are a lot of opportunities,” Ms. Gadjo added. “The industry is recognizing that women have a lot to bring to the table and are seeking them to fill positions. There is a great demand for professionals in this career.”