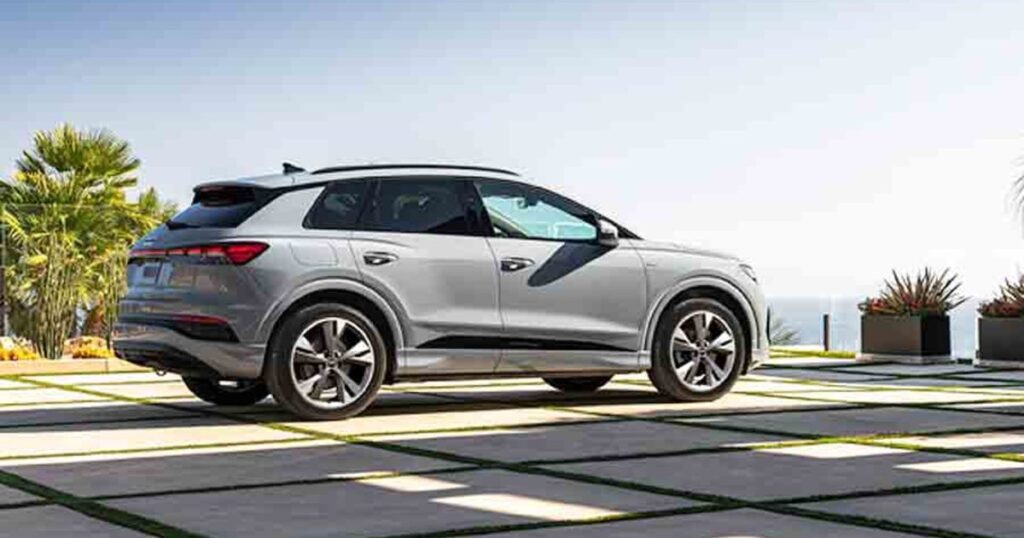 
Built on the same Volkswagen Group MEB platform as the VW ID4, the Audi Q4 e-tron features an identically sized 82-kilowatt-hour battery pack and a range of up to 265 miles in the base model, with the two-motor, all-wheel-drive version delivering 236 miles of range. The aerodynamically helpful all-wheel-drive Sportback goes up to 242 miles per full charge, Audi says.

Those numbers are an improvement over the original Audi e-tron, which launched in 2019 with two motors standard and a range of 204 miles despite its larger 95-kilowatt-hour battery. The original had trouble in the market because its range badly trailed competitors such as the Tesla Model 3. Regarding range, Weissland said consumers need to look at the big picture and study their own driving habits.

“If you look at facts and figures, 80 percent of our customers charge at home, and over 90 percent drive less than 50 miles per day,” he said. “So if you look at all those facts, some people say you need a 300, 400, 500, maybe even 1,000 miles of range. But look, it’s not justifiable to go all the way to the high range. I think, following some of the customers, probably an ideal is a range around 300 miles.”

When the Q4 e-tron and Q4 e-tron Sportback arrive in U.S. dealerships this fall, they will join the similarly sized e-tron crossover, the e-tron sportback crossover, and the high-end e-tron GT in the brand’s all-electric lineup, with more battery-electric models to come. Weissland said demand for BEVs continues to outstrip supply by a wide margin — and not just because of production constraints caused by limited microchips and wire harness shortages resulting from Russia’s invasion of Ukraine.

“We were also surprised by how much demand we see in the market for electric vehicles, but that’s something we work closely on with [Audi] headquarters and I’m convinced that we will find solutions for, hopefully, most every customer who wants to drive an electric Audi,” Weissland said.

The Q4’s arrival in the U.S. has been delayed from its original due date, dealers told Automotive News. Audi has had a tumultuous year trying to keep vehicles flowing to dealerships, especially in the U.S. A majority of its wire harnesses had been sourced from Ukraine, and that flow was hampered temporarily by the invasion in February. Then in March, the brand lost about 1,900 vehicles heading to the U.S. when a Volkswagen Group car carrier ship, the Felicity Ace, sank in the Atlantic Ocean after a fire.

Weissland said there are always “a lot of challenges” when a brand prepares to launch a new vehicle, but 2022 model year demonstrators were distributed to Audi’s U.S. dealer network “a few weeks ago and 2023 model year vehicles are now on sale for customers.”