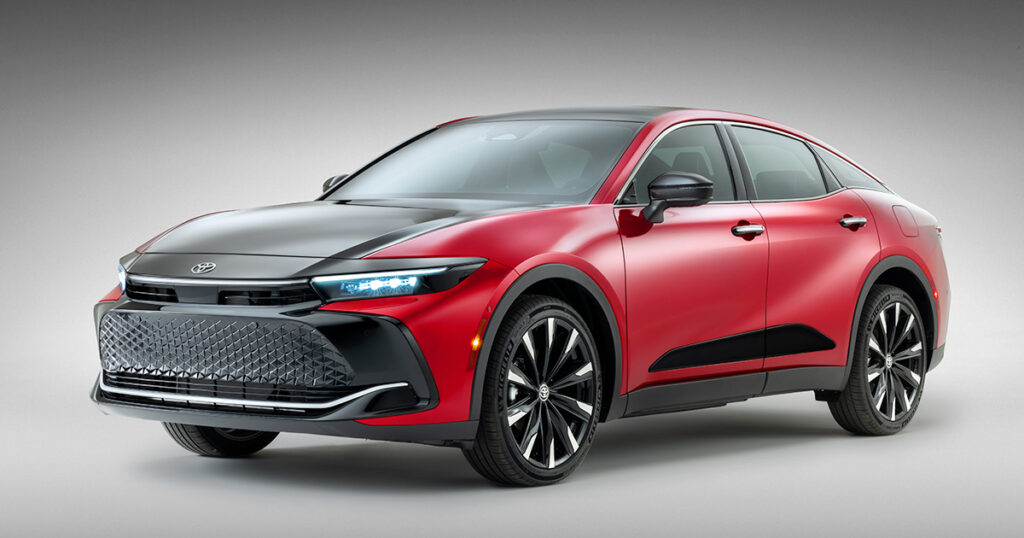 
The 2023 Toyota Crown will be the brand’s new top-of-the-line vehicle in Canada and the United States, reviving the nameplate in the two countries for the first time since 1972 while the model has been in its native Japan for decades.

Toyota calls the Crown a full-size sedan with a “higher ride-height design,” but the styling is much closer to that of a fastback crossover — such as the Audi Q5 Sportback — though with fixed rear glass and a traditional trunk instead of a hatchback.

The 2023 Crown will offer two hybrid powertrains: a standard one tuned to maximize fuel savings on base XLE and midrange Limited models, and a second on the Platinum trim aimed at maximizing performance. Toyota estimates the standard hybrid will deliver up to 38 mpg combined — approximately 6.19 litres per 100 kilometres combined — while the performance-tuned version, which it says delivers a combined 340 hp, will get an estimated 28 mpg combined, or 8.4 litres per 100 kilometres combined.

The standard powertrain mates a naturally aspirated 2.5-litre inline-four engine to a continuously variable transmission, while the Platinum trim is powered by a turbocharged 2.4-litre inline-four engine mated to a six-speed automatic gearbox. Both feature an electronic on-demand all-wheel-drive system that sends power to the rear wheels via an axle-mounted electric motor that engages when needed for extra traction.

The 15th-generation Crown, built in Japan, will come standard with Toyota’s new infotainment system and a 12.3-inch touch screen. It will be equipped with Toyota Safety Sense 3.0, the brand’s suite of advanced safety and driver-assistance systems.