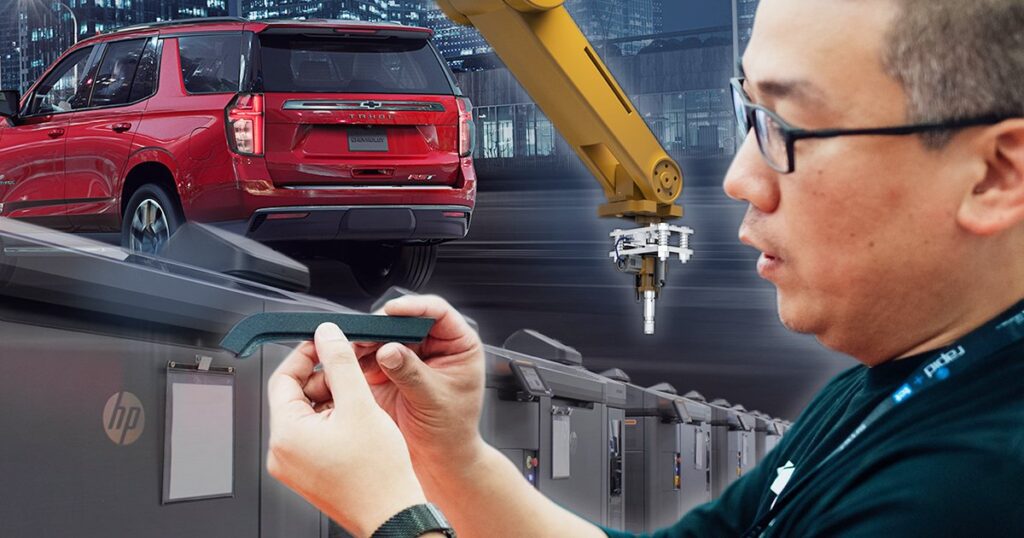 
Engineers working on the Tahoe changed the design of the spoiler on the upper part of the vehicle’s tailgate to ensure the large SUV met its fuel economy certification numbers if tested by the EPA. The revamped spoiler required a new part, what GM calls a closeout seal. The rubberlike components mount at each end of the spoiler, just above the tailgate.

The part is normally made in a process called injection molding. But a new injection-molded closeout seal, GM learned, would take a minimum of 12 weeks to produce.

Bardsley, the design release engineer for the closeout seal, worked with engineers in two GM labs at the company’s sprawling Global Technical Center in Warren, Mich. First, the Additive Innovation Lab 3D-printed a few closeout seals to test whether a 3D-made version of the part could meet the automaker’s quality and appearance standards.

“We were able to get some seals pretty quickly for preliminary testing. We wanted to as closely as possible replicate the injection-molded seal,” Bardsley said.

With the early seals showing promise, GM’s Additive Industrialization Center made the next iteration of the seal out of the production-intent material to determine whether it could be produced in high volume. Bardsley held samples of the second iteration in her hand in just two days. From there, GM solicited bids from suppliers to make the part.

The job went to GKN Forecast 3D, a Carlsbad, Calif., outfit that is part of GKN Additive.

“We had the right technology and the right capabilities at the right time to help out with this particular problem,” John Dulchinos, president of GKN Additive, told Automotive News.

GKN invested in additive manufacturing machines that use a form of binder jet printing, which can make many parts at one time.