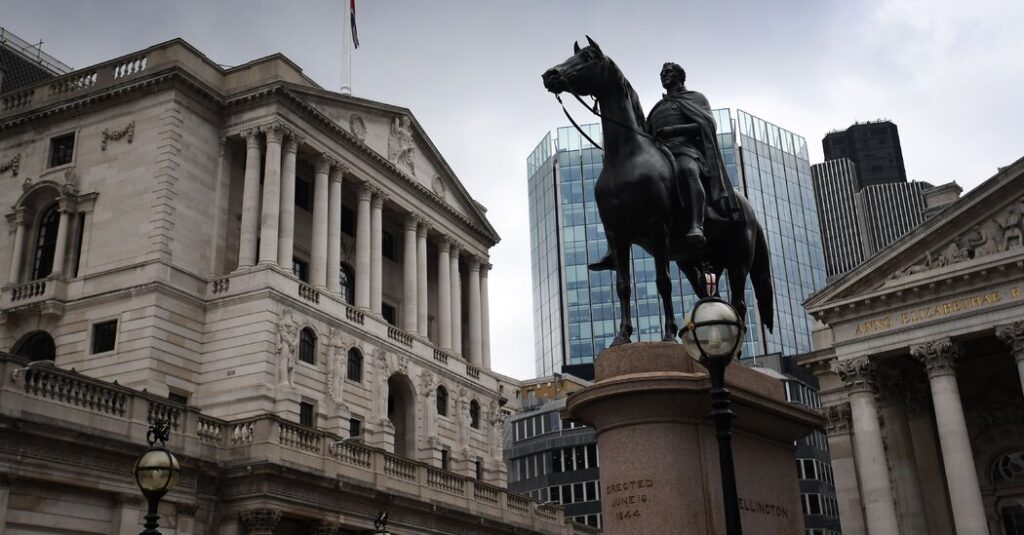 5 Takeaways From the Bank of England’s Meeting


The Bank of England continued its battle against inflation on Thursday, raising rates for the sixth consecutive meeting, this time by half a percentage point. It was the biggest jump since 1995. The central bank also revised its outlook for the British economy, predicting higher inflation and warning that a lengthy recession could commence later this year.

Inflation will be higher than previously predicted.

Price pressures “have intensified significantly” since the bank’s last quarterly Monetary Policy Report in May. Back then, the bank predicted inflation would peak in the fourth quarter, at just above 10 percent. The new forecast is for a peak of 13 percent in the October-to-December period, with inflation remaining “at very elevated levels throughout much of 2023.”

The bank cited “Russia’s restriction of gas supplies to Europe and the risk of further curbs” as sparking “a near doubling in wholesale gas prices since May,” which explains most of the overshoot in inflation. There is a risk that global energy prices and pandemic-related supply chain disruptions will lead to “more enduring” price and wage pressures at home, the bank said.

A recession could be coming.

The bank said British economic growth was slowing, with the latest surge in natural gas prices leading to “another significant deterioration” in the outlook as it squeezes household budgets. The bank forecast that Britain would enter a recession in the last quarter of this year that will last through to the end of 2023. Next year, the economy would contract 1.5 percent, the bank predicted, much worse than the 0.25 percent contraction it previously forecast.

Incomes will experience the worst squeeze on record.

Household incomes, once adjusted for inflation and taxes, are projected to fall sharply this year and next. In 2022, this measure of incomes will fall 2.5 percent and another 1.25 percent in 2023, the worst in records that go back to the 1960s.

Pay growth, even though its higher than it’s been in a long time, has not kept up with inflation. Millions of households are expected to feel a more intense squeeze in October when the bank predicts the cap on household energy bills to rise to £3,500 (about $4,240), three times the amount it was last year.

The bank is likely to start selling its holdings of government bonds next month.

While the bank is using higher interest rates to tackle inflation, in the background it is also reversing one of its major policies that helped support the economy during the pandemic: bond buying. Until December it increased its holdings of British government bonds to 875 billion pounds but has since stopped reinvesting the proceeds from maturing bonds, allowing the stock of assets it holds to shrink.

Next month, the bank expects to start sell bonds back to the market, something it has never done. It expects to sell about £10 billion in bonds a quarter for the first year.

PrevPreviousTesla faces a pressure campaign from activist investors.
Next‘Head of Team Anywhere,’ and Other Job Titles for an Uncertain TimeNext