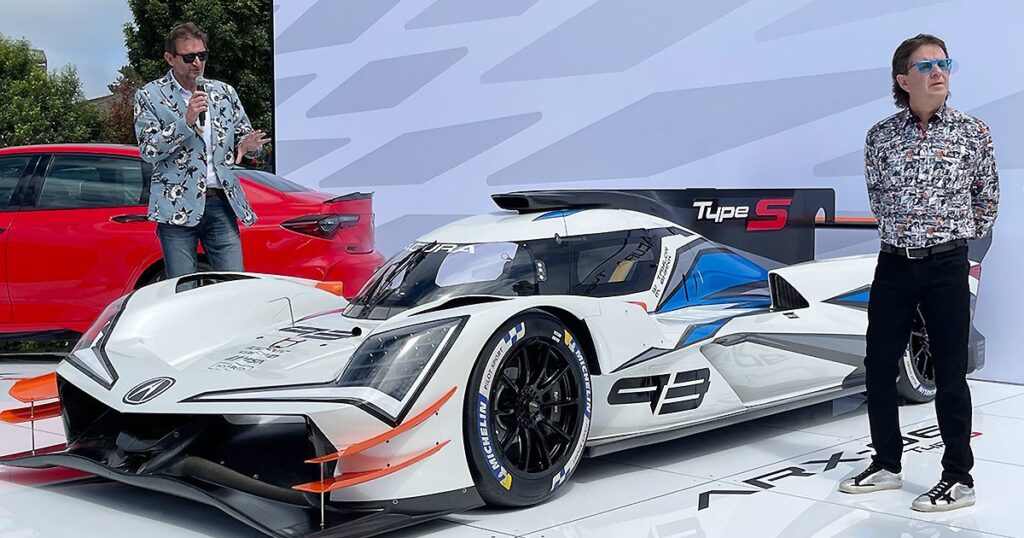 
“The race car dictates knowledge to us, and it’s just logical thinking to put it into these cars,” Marek said. Aerodynamics is critical to both race cars and EVs, he said, since it makes a dramatic difference on an EV’s battery range.

The rear spoiler on the Acura concept is based on race car engineering, Marek said, and the performance division also helped inform how much “tumblehome” the EV has in the rear section. That refers to the amount of inward slope on the greenhouse above the beltline. The more slant, the more efficiently an EV can slip through the air.

“You want to keep the air connected to the car as far as you can,” the designer said.

Marek said one of the highlights of designing the vehicles simultaneously was putting the race car and production aerodynamics experts together to collaborate. Deciding how to make it look good on either vehicle fell to the hands of the designers.

One shared design element that carried forward — from the previous-generation racer, the ARX-05, to the new 06 race car and then to the Precision EV — is their front ends: They’re all inspired by the bulky head of a hammerhead shark.

Other shared elements include Acura’s signature chicane-style LED lighting and oversized Acura badge, which creates a dramatic lighting display for the reinvented space where a radiator grille might have been.

While the Precision EV is meant to signal future Acura EVs, it also teases the company’s upcoming ZDX electric compact crossover that will launch in 2024.

Marek said he is pushing for concept elements to land on the production-version ZDX, now being designed in the same studio. But as for the Precision EV’s noticeable absence of door handles, Marek said: “That’s still TBD.”

PrevPreviousNissan will ax the Rogue Sport crossover
NextDoes Watching College Football on TV Have to Be So Miserable?Next