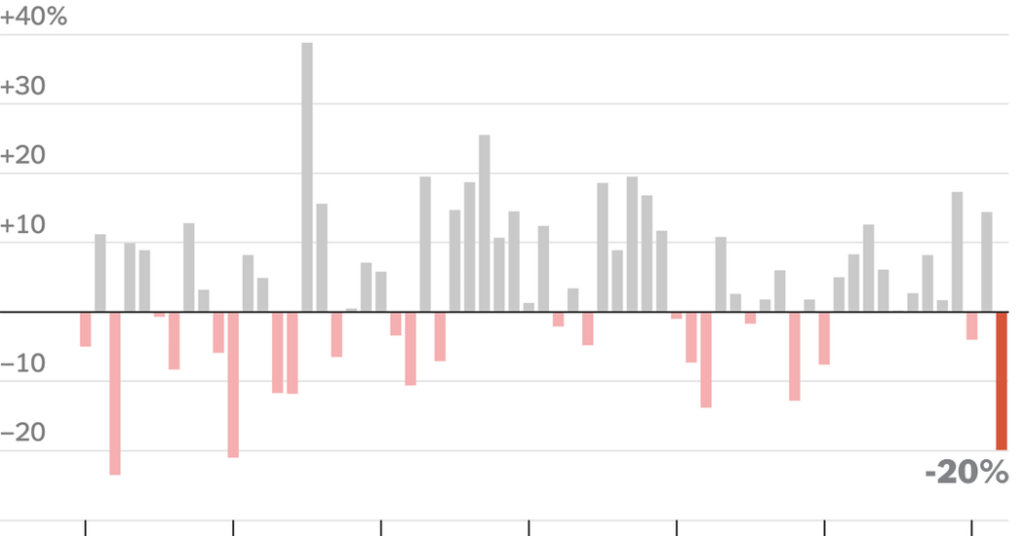 After Stock Market’s Worst Start in 50 Years, Some See More Pain Ahead


Wall Street set records in the first half of the year, none of them good.

The economy is on the cusp of a recession, battered by high inflation and rising interest rates, which eats into paychecks, dents consumer confidence and leads to corporate cutbacks. As it has teetered, markets have tanked.

The stock market is on track for its worst first six months of the year since at least 1970. The S&P 500 index, the cornerstone of many stock portfolios and retirement accounts, peaked in early January and has fallen 19.9 percent over the past six months.

The sell-off has been remarkably broad, with every sector except energy down this year. Bellwethers including Apple, Disney, JPMorgan Chase and Target have all fallen more than the overall market.

And that’s only part of the horror story for investors and companies this year.

Bonds, which are seen as providing lower but more stable returns for investors, have had a terrible six months, too. Because bonds are particularly sensitive to economic conditions, reflecting shifts in inflation and interest rates more directly than stocks, this is perhaps an even more worrying sign about the state of the economy.

An index tracking the 10-year Treasury note, a benchmark for borrowing costs on mortgages, business loans and many other kinds of debt, has fallen by about 10 percent in price. Analysts at Deutsche Bank had to go all the way back to the late 18th century to find a worse first-half-year performance for equivalent bonds.

“Make no mistake, this has been a torrid first half,” said Jim Reid, the head of credit strategy and thematic research at Deutsche Bank.

For the average investor with a diversified portfolio of stocks and bonds, it probably feels like “nothing worked,” according to Victoria Greene, the chief investment officer at G Squared Private Wealth. That’s especially true for investors who bought at the start of the year, when markets were in a more buoyant mood. “The venerable 60-40 portfolio hasn’t held up at all,” Ms. Greene said, referring to the mix of 60 percent stocks and 40 percent bonds that financial advisers traditionally suggest to investors to protect them from a downdraft.

Since the start of the year, stubbornly high inflation, which is now running at the fastest pace in more than 40 years and made worse by soaring food and energy prices because of the war in Ukraine, has eroded corporate profit margins. That has come on top of the persistent supply chain snarls that have also made it harder for companies to fill customer orders and manage inventories.

As investors have been reassessing the outlook for companies and sold their stocks, a few weeks ago the S&P 500 fell into a bear market, a rare and grim sign of pessimism, which Wall Street defines as a 20 percent fall from a recent peak. The index has fallen in 10 of the past 12 weeks, with occasional rallies quickly fizzling as a new bout of worries wash over the market.

The Federal Reserve’s determination to tame inflation by raising interest rates is a major factor in the market turmoil. Higher borrowing costs cool the economy by lowering demand, which in turn reduces the pressure on prices. Sharply higher bond yields, which move in the opposite direction as prices, have saddled bond investors’ portfolios with losses.

And if the Fed’s fight against inflation requires rates to rise so high, so quickly that the economy tips into recession, that would limit companies’ ability to hire new staff, spend on new projects and repay their debts, which is ominous for both stocks and bonds.

Assets that were thought to be unaffected by these trends have also provided little refuge. Bitcoin, the largest cryptocurrency, has fallen more than 50 percent this year.

Surveying the financial wreckage, the question arises: How bad could it get?

In the next few weeks, companies will begin to report their second-quarter earnings, updating investors on how their finances are faring. These reports will be scrutinized for signs that the shaky economy may be taking a turn for the worse, which will factor into buying and selling decisions.

As important as what companies reveal about their latest quarter is what they say about how things are shaping up for the quarters to come, according to Steve Sosnick, the chief strategist at Interactive Brokers.

“In general, expectations remain very high,” he said. That’s either a sign that conditions may not be as bad as some fear, or that they are set to disappoint. Analysts’ forecasts for profits at companies like Apple and JPMorgan Chase have remained relatively stable over the past month.

Andy Sieg, the president of Merrill Lynch Wealth Management, said he has not seen a major increase in trading activity among clients, which might be expected during a period of turmoil. There has, however, been a big uptick in clients seeking conversations about financial planning over the past year, which he described as a “constructive” approach to dealing with the downturn.

“When markets are more volatile, emotions rise,” Mr. Sieg said. “That’s just a normal human reaction to the kind of environment that we’re living in.”

Even if the news on corporate earnings or the economy is not as bad as some fear, it may take time for the gloomy mood to shift, and for what many think is another false dawn to mark a decisive turning point. “Typically a bear market turns when the world still feels horrible,” said Ms. Greene of G Squared Private Wealth.

“There’s only ever one true bottom,” Mr. Sosnick of Interactive Brokers said. “That’s really the final turning point. And so to me it’s not clear that we’ve seen the circumstances that signal one of those yet.”

For Mr. Reid of Deutsche Bank, “a lot depends on the recession timing,” he said. The fall in stocks so far would be an extreme outlier if it weren’t accompanied by a recession, according to his research.

Economists have been raising the probability that the U.S. economy is about to go into recession, and a shrinking economy is more in keeping with the scale of market decline that Mr. Reid expects. He thinks that it’s “plausible” for the stock market to fall 35 to 40 percent from its January peak, meaning that the current decline is only about halfway finished.