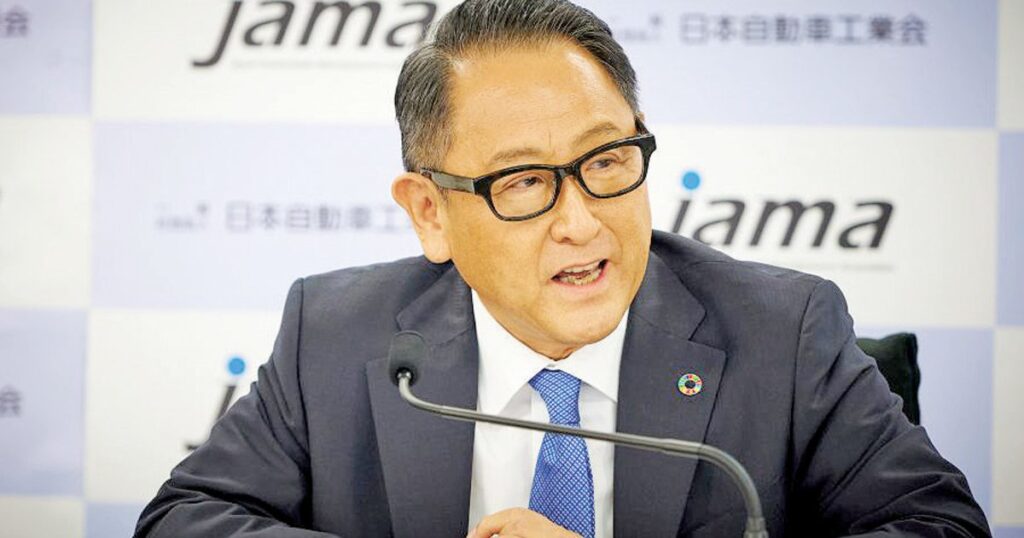 
LAS VEGAS – Akio Toyoda, CEO of Toyota Motor Corp., said his goal is to “reduce carbon emissions as much as possible as soon as possible.”

In prepared remarks, he said Toyota is “balancing the infrastructure we have today with the energy we need for tomorrow.”

Toyoda, here for the automaker’s annual dealer meeting, on Thursday, met with a handful of journalists to discuss carbon neutrality and the auto industry’s role in slowing global warming.

Electric vehicles “are just going to take longer than the media would like us to believe,” Toyoda told the dealers during their meeting. He pledged to offer the “widest possible” array of powertrains to propel cars cleanly. “That’s our strategy and we’re sticking to it.”

“Some are racing to a finish line of all-electric,” he said in the prepared remarks released prior to his meeting with journalists. Toyoda “does not see a finish line until Toyota gets to carbon neutrality.”

Late last year, Toyota committed 8 trillion yen (worth $70 billion at the time) to electrify its lineup by 2030, half of it to develop a battery EV lineup, as it looks to tap a growing market for zero-emission vehicles.

Toyota expects its sales of full-electric cars to reach only 3.5 million vehicles by the end of the decade, or just over a third of its current global volume.

Toyota’s luxury Lexus arm aims to have a full lineup of battery EVs in all vehicle segments by 2030 and for battery EVs to make up 100 percent of its global sales in 2035 in Europe, North America, and China — totalling 1 million units globally.

In addition, Toyota has committed $3.8 billion to build a factory in North Carolina to make batteries for hybrids and EVs.

The CEO said a lack of sufficient infrastructure will hold back EV adoption rates, which is a factor in its decision not to go all in on electricity.

Bloomberg contributed to this report.