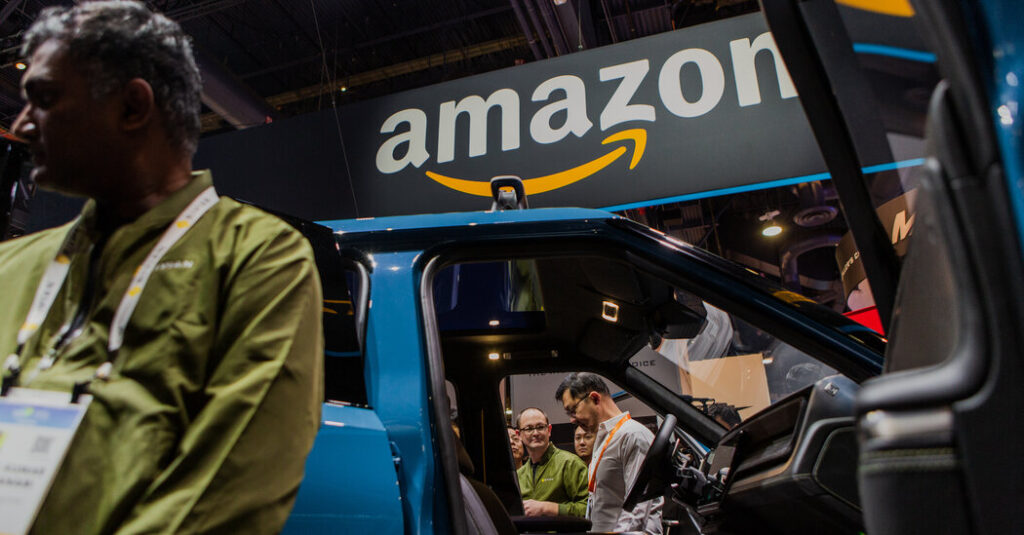 
Nearly three years ago, Amazon announced that it would buy 100,000 custom-made delivery vehicles from Rivian, a fledgling maker of electric vehicles. On Thursday, after some delays, the companies said hundreds of the vans were finally on the road.

The battery-powered trucks are crucial to Rivian’s business plan and survival in a very competitive auto industry. And they are an important element of Amazon’s plan to limit carbon emissions as it builds its own fleet and relies less on contractors like UPS to deliver billions of orders of toothpaste, hair dryers, dog toys and sundry other products.

But questions remain about how fast Rivian, about 18 percent of which is owned by Amazon, can fulfill the retail giant’s order. The automaker, which began producing vehicles in small numbers last year, is struggling to ramp up while there are shortages of semiconductors and other components. And last week Rivian warned employees that they should expect layoffs and other cost-cutting measures.

“We are making some adjustments to certain teams within the business,” R.J. Scaringe, the founder and chief executive of Rivian, said in an interview this week. He declined to say how many jobs might be cut.

Amazon has said it doesn’t expect all 100,000 trucks to be delivered before the end of the decade. In a November securities filing, Rivian said it planned to deliver the 100,000 trucks “by 2025.” Mr. Scaringe declined to say if that was still the plan, saying only that he hoped to deliver the vans sooner than Amazon was expecting them.

In January, Ross Rachey, who oversees Amazon’s global fleet, said the companies expected to have 10,000 deployed as early as this year. So far Rivian has delivered several hundred, and Amazon now expects to have “thousands” by the end of the year, said Udit Madan, vice president for transportation at Amazon.

Rivian also makes a pickup truck and a related sport utility vehicle. That means the company is trying to ramp up two assembly lines at once — a tall order for any carmaker, especially a relative newbie.

The nascent market for electric delivery vans is getting more competitive. Ford Motor, a large shareholder in Rivian, began selling an electric version of its popular Transit van several months ago and has delivered about 3,000 so far. Ford has sold some of its shares in the company in recent months.

Rivian’s production problems are symptomatic of the difficulties that young electric vehicle manufacturers face as they try to challenge the traditional automakers. Many are discovering how difficult and costly it is to mass-produce vehicles, and time is not on their side because the established companies are also moving quickly toward electrification.

As the overall auto market stagnates, the popularity of battery-powered cars is soaring worldwide.

So far Tesla, which sells more electric cars than any other manufacturer, is the only electric vehicle maker to have gained significant market share. But that company doesn’t yet make or sell trucks.

Canoo, which has announced plans to offer a roomy electric van this year, warned in May that it could run short of cash. Management “has identified substantial doubt about our ability to continue as a going concern,” Canoo said in a regulatory filing. The company’s prospects improved this month when Walmart said it would buy 4,500 Canoo vehicles to make deliveries for online orders.

Amazon is not depending solely on Rivian for emission-free vehicles. It plans also to order electric vans from Stellantis and other manufacturers, albeit in smaller numbers.

Amazon has been investing heavily to build its own network of delivery contractors and already has far more than 100,000 vans, most of them diesel powered. It delivered about six billion packages in the United States last year, surpassing UPS, according to estimates from Bank of America.

With a design that has been compared to a friendly blue whale, the Rivian vans come with large touch screens and technology unavailable from traditional truck makers, which are just beginning to sell electric delivery vehicles. By replacing gasoline or diesel trucks with electric vans, Amazon would help contain an alarming increase in emissions from the growth in delivery vehicles.

During a joint interview, Mr. Scaringe and Mr. Madan portrayed the Rivian van as the product of meticulous joint development that would be much more comfortable for drivers, who are themselves in short supply. The companies obsessed over the door handles and other details, Mr. Scaringe said, and the vehicles will have seats with heating and cooling built in. The doors are designed to make it easier for drivers to jump in and out of the trucks.

Amazon, known for using software to extensively automate and streamline warehouses and other operations, sought to extend that approach to the vans.

For example, navigation software in the Rivian trucks automatically steers drivers to their next address and displays information about customers. “Things they would normally have to react with will happen automatically,” Mr. Madan said.

Delivery vehicles lend themselves to battery power because they tend to travel fairly short distances, compared with, say, semitrucks, which Amazon also uses. The Rivian vehicles have enough range to make deliveries all day and charge overnight, Mr. Madan said. Amazon said it had added thousands of charging stations at its delivery depots for the vans.

Electric vehicles use less energy in city driving than on the highways — the opposite of internal combustion vehicles — because their regenerative brakes can recoup some of the energy used to propel them. Unlike engines, electric motors use minimal energy when stopped at traffic lights.

Rivian was viewed as one of the most promising electric carmakers until recently. Its debut pickup, the R1T, was named Motor Trend’s Truck of the Year for 2022. Other critics have also raved about the pickup.

But the company’s production problems have unnerved investors — Rivian’s stock price has tumbled to less than $35, from around $170 soon after the company’s initial public offering.

Competition is also heating up. This spring, Ford began selling an electric version of its popular F-150 pickup, the Lightning, which has been an immediate hit and a rival to the R1T. Next year, General Motors will start selling an electric Chevrolet Silverado pickup truck.

All automakers have suffered from shortages of semiconductors and other crucial parts. But as a smaller and newer player, Rivian probably has much less clout with suppliers than Ford or G.M. Rivian said in May that, since March, it had lost a quarter of its planned production time because of supply chain problems.

Mr. Scaringe said he expected the semiconductor shortage to last the rest of the year, but “I think that’s going to be relatively short term.”

He said a slowing economy or a recession could help alleviate shortages but would pose problems of its own. “We are looking at what will be inevitably a very dynamic next six months from a supply chain point of view, from an interest rate point of view, an inflation point of view,” Mr. Scaringe said.