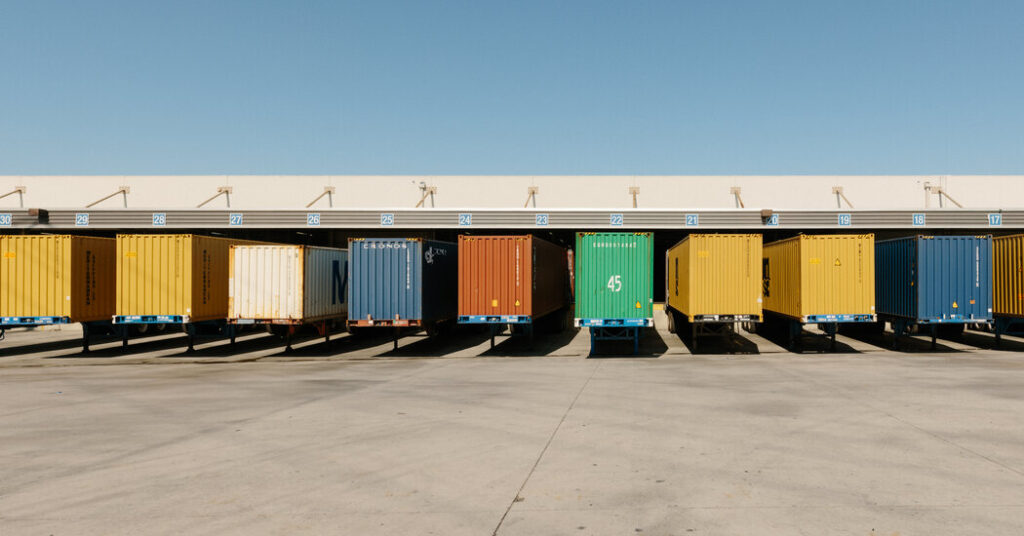 As Dockworkers Near Contract’s End, Many Others Have a Stake


LOS ANGELES — David Alvarado barreled south along the highway, staring through the windshield of his semi truck toward the towering cranes along the coastline.

He had made the same 30-minute trek to the Port of Los Angeles twice that day; if things went well, he would make it twice more. Averaging four pickups and deliveries a day, Mr. Alvarado has learned, is what it takes to give his wife and three children a comfortable life.

“This has been my life — it’s helped me support a family,” said Mr. Alvarado, who for 17 years has hauled cargo between warehouses across Southern California and the twin ports of Los Angeles and Long Beach, a global hub that handles 40 percent of the nation’s seaborne imports.

He weathered the blow to his paycheck early in the pandemic when he was idling for six hours a day, waiting for cargo to be loaded off ships and onto his truck. Now the ports are bustling again, but there is a new source of anxiety: the imminent expiration of the union contract for dockworkers along the West Coast.

If negotiations fail to head off a slowdown, a strike or a lockout, he said, “it will crush me financially.”

The outcome will be crucial not only for the union dockworkers and port operators, but also for the ecosystem of workers surrounding the ports like Mr. Alvarado, and for a global supply chain reeling from coronavirus lockdowns and Russia’s invasion of Ukraine. Inflation’s surge to the highest rate in more than four decades is due, in part, to supply chain complications.

The contract between the International Longshore and Warehouse Union, which represents 22,000 workers at 29 ports from San Diego to Seattle, and the Pacific Maritime Association, representing the shipping terminals, is set to expire on Friday. The union members primarily operate machinery like cranes and forklifts that move cargo containers on and off ships.

In a statement this month, representatives of the two sides said that they didn’t expect a deal by the deadline but that they were dedicated to working toward an agreement.

The negotiations have centered largely on whether to increase wages for the unionized workers, whose average salaries are in the low six figures, and expanding automation, such as using robots to move cargo containers, to speed up production, a priority for shipping companies.

In an open letter posted on Facebook last month, the union president, Willie Adams, attacked moving toward automation, saying it would translate to lost jobs and prioritizes foreign profits over “what’s best for America.”

The State of Jobs in the United States

Job gains continue to maintain their impressive run, even as government policymakers took steps to cool the economy and ease inflation.

“Automation,” Mr. Adams wrote, “poses a great national security risk as it places our ports at risk of being hacked as other automated ports have experienced.”

As the negotiations, which began in early May, continue, record levels of cargo have arrived here.

In May, the Port of Los Angeles had its third-busiest month ever, handling nearly one million shipping container units, largely stocked with imports from Asia. Twenty-one ships were waiting to dock outside the local ports this week, down from 109 in January, according to the Marine Exchange of Southern California.

On a recent trip here, President Biden — who authorized a plan last year to keep the Port of Los Angeles open 24 hours a day — met with negotiators to urge a swift agreement. Leaders on both sides say Mr. Biden has worked behind the scenes on the matter, hoping to avoid delays.

When a breakdown in talks resulted in an 11-day lockout in 2002, the U.S. economy lost an estimated $11 billion. President George W. Bush eventually intervened, and the lockout was lifted. In 2015, when negotiations went on for nine months, the Obama administration intervened after the standoff led to a work slowdown and congestion at West Coast ports.

Mr. Biden’s early intervention could help stave off severe backlogs, said Geraldine Knatz, a professor of the practice of policy and engineering at the University of Southern California.

“In the past, the federal government would swoop in at the end when negotiations were at a stalemate,” said Ms. Knatz, who was executive director of the Port of Los Angeles from 2006 to 2014. “The relationship that developed between the ports and the Biden administration as a result of the supply chain crisis is something that did not exist before.”

Even so, contingency plans are in place, said Jonathan Gold, vice president of supply chain and customs policy at the National Retail Federation. Some retailers began pushing up their timetables months ago, ordering supplies long before they needed them, he said, and using ports along the East and Gulf Coasts when feasible.

In an interview, Gene Seroka, executive director of the Port of Los Angeles, said he didn’t believe the looming contract deadline would lead to any delays: All the parties involved, he said, know that it’s already an exceptionally busy time for the region.

Retail imports account for 75 percent of all cargo coming into the ports, and with back-to-school and holiday shopping seasons nearing, Mr. Seroka said he did not expect cargo volumes to shrink to more typical levels until next year.

“Everyone is working as hard as they can,” Mr. Seroka said.

But for some retailers, the current limbo brings back painful memories.

In early 2015, as delays arose during contract talks, Charlie Woo laid off more than 600 seasonal workers from his company, Megatoys.

“It was rough back then,” Mr. Woo said on a recent morning from his 330,000-square-foot warehouse in Commerce, Calif., an industrial city in Los Angeles County not far from the ports.

Mr. Woo started Megatoys in 1989 and now imports around 1,000 cargo containers from China every year. The 40-foot containers come filled with small toys like plastic Easter eggs and miniature rubber soccer balls and basketballs, which his employees package into baskets sold at grocery stores and bigger outlets like Walmart and Target.

During the pandemic disruptions last fall, some of his shipments were stalled by nearly three months — delays that ultimately translated into a 5 percent drop in sales for his company, which Mr. Woo said brings in tens of millions of dollars annually.

He’s bracing for another hard year.

“I expect problems; I just don’t know how big the problem will be,” said Mr. Woo, who also owns a manufacturing plant near Shenzhen, China, and said he hoped more U.S. terminals moved toward more automation.

“We must find innovative solutions to catch up with the ports in Asia,” Mr. Woo said.

On a recent afternoon, Mr. Alvarado, the truck driver, reminisced about the early days of the career he’d been born into.

During summer vacations as a little boy, he’d ride shotgun with his father, who has driven a semi truck for nearly four decades at the ports, and they’d listen to Dodger baseball games together.

“This is all I ever wanted to be,” Mr. Alvarado, 38, said. Over the years, he has seen many childhood friends move away because they could not afford to live here.

It hasn’t always been easy for him, either. Last fall, with more than 80 cargo carriers anchored off the coast here, in part because of the lingering pandemic and a surge of imports ahead of the holiday season, he sometimes waited for hours before he finally got a load, said Mr. Alvarado, who is among the roughly 21,000 truck drivers authorized to pick up cargo at the ports.

For an independent contractor, time is money: Mr. Alvarado works 16 hours some weekdays and aims to pick up and drop off four loads each day. When he does that consistently, he said, he can make up to $4,000 a week, before expenses.

During the worst of the pandemic delays, he was lucky to get two loads a day, and although things have improved in recent months, he now frets about fuel prices.

“Inflation has been intense,” he said.

Filling up with 220 gallons for the week now typically costs $1,200, double that of several months ago, Mr. Alvarado said.

“It all starts to add up,” he said. “You wonder if you should think about doing something else.”

As for the prospects in the labor talks, Mr. Alvarado said he was trying to remain optimistic. The union workers, he said, remind him of his own family: men and women from blue-collar upbringings, many of them Latino with deep family ties to the ports. A work stoppage would be painful for many of them, too.

“It will hurt all Americans,” he said.

As he drove past the ports, Mr. Alvarado turned his truck into a warehouse parking lot, where the multicolored containers lined the asphalt like a row of neatly arranged Lego blocks.

It was his third load of the day, and for this round, he didn’t have to wait on the longshoremen to load the carrier onto his truck. Instead, he backed his semi up to a chassis, and the blue container snapped into place.

He pulled up Google Maps on his iPhone and looked at the distance to the drop-off in Fontana, Calif.: 67 miles, an hour and half.

It might, Mr. Alvarado said, end up being a four-load day after all.