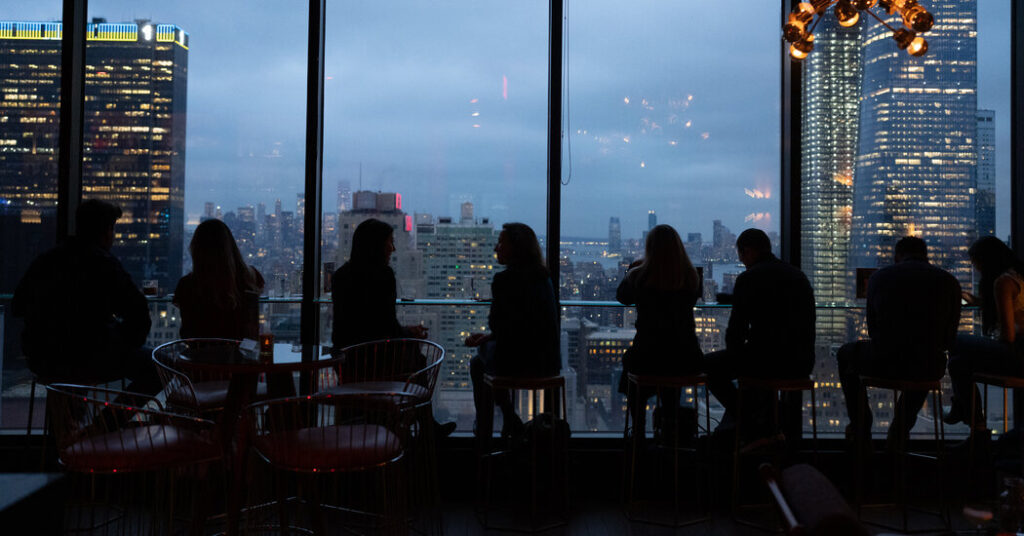 
With the unsteady return of workers to the office comes the shaky return of the happy hour.

The bar on the second floor of Beer Authority in Times Square was nearly full when Peter Torres and Jimmy Pazan, both 29, walked in on a Wednesday night last month, but they managed to find two open stools at the corner in front of a TV airing sports highlights.

The two, who were hired by a Midtown bank during the pandemic and started to return in person over the past year, had just wrapped up their workday.

“After a particularly hard day at the branch, we come out,” said Mr. Pazan, whose drink of choice is a whiskey and ginger ale.

“It’s not planned; it just happens,” said Mr. Torres, who prefers a Stella.

With more than 40 people at the bar, the general manager, Aoife Canny, said it was slower than it had been in recent weeks.

Even as companies struggle to coax workers back to the office, some bars are reporting that the weekday happy hour, an institution that has been around since the 1930s, is reaching a semblance of prepandemic times. With office occupancy nationwide averaging 41 percent — less than half prepandemic level of 99 percent, according to the workplace security firm Kastle Systems — central business districts are emptier than they were in 2019.

Still, those who are back in the office are going back to the bar after work.

Melisa Rodriguez, 24, and Samaya Mayes, 22, employees of an events company in Midtown, joined about 10 colleagues for an impromptu happy hour at Beer Authority on a recent Wednesday. Their company is back in the office twice a week.

The past two years have changed the way we work in profound ways.

“It’s a nice break from focusing on work,” Ms. Rodriguez said, adding that it offers a pause between the workday and her commute home.

Ms. Mayes, who was recently hired, enjoys the company of her co-workers outside the office. “It’s a time to be ourselves, and not be uptight,” she said.

The pandemic shuttered about 90,000 bars and restaurants nationwide in the last two years, according to the National Restaurant Association; establishments that survived or have since opened face fewer customers and inconsistent business, as coronavirus cases in the United States hover around 110,000 per day, according to a New York Times database. And soaring prices for gas, groceries and other goods have been “kind of a double whammy for happy hours, in particular where consumers might be feeling like they are uncomfortable spending,” said Emily Moquin, a food and beverage analyst for Morning Consult.

At Jimmy’s Corner in Times Square, Adam Glenn, the owner, said that before the pandemic forced his bar to close for 18 months, the happy hour crowd would begin to trickle in before most offices closed.

“If you weren’t there by 5 o’clock, you probably weren’t getting a seat,” Mr. Glenn said. “You’d be standing, and we’d be packed.” The bar has been in his family for 50 years.

But even as more offices reopen or require workers to return on some days, happy hour at Jimmy’s Corner still isn’t what it was before the pandemic.

“We’re, I would say, a lot closer to what we were before and really happy with how much stuff has grown since we reopened in October,” Mr. Glenn said. “But it’s still not quite the same after-work, pre-theater crowd that we used to have.”

“These changing work schedules absolutely mean less business for bars and restaurants, less traffic to walk in the door,” she said. “Those hybrid work schedules and those at-home work schedules are having an impact.” Average monthly visits to a bar have wavered — and were at 1.5 in February and 1.2 in March, according to Morning Consult’s most recent data.

Jimmy’s Corner has also faced what Mr. Glenn called “little bumps” over the past few months, including the winter Omicron surge and a wave of Broadway closures. Two musicals — “Dear Evan Hansen” and “Tina” — recently announced that they would end their runs this summer. Mr. Glenn said his happy hour did not have the same “consistency and predictability” as before.

Happy hours at 2Twenty2 Tavern in Chicago’s central business district have been closer to a prepandemic normal over the past couple of months, said Chris Mannos, an owner. But unlike the Beer Authority and Jimmy’s Corner, “you still have people that wear masks inside and still seem to be worried about whatever’s going on with Covid,” he said.

In Cook County, which includes Chicago, at least one in five residents has been infected with the coronavirus — more than 1.2 million cases — since the pandemic began.

While some bars in the area have shortened their hours or closed on certain days, 2Twenty2 Tavern hasn’t done so, Mr. Mannos said.

“We’re a family business, so if we went down, it’s our whole livelihood,” he said. “We just grinded this out, and I think that kind of paid off.”

At Everson Royce Bar in Los Angeles, Jason Moore, general manager, said large groups had started to return for happy hour, including an outing of 50 people from Spotify.

“You can definitely tell the difference from the beginning of the year, when everybody was still kind of freaked out from the newest variant,” said Mr. Moore, who books large groups for the bar.

Happy hours at the bar have ranged in size from a few co-workers popping in to grab drinks to large groups that call to reserve tables, Mr. Moore said.

He added that this summer, Everson Royce Bar was expecting even larger groups of people for after-work drinks.

“This summer is going to jump off,” he said. “We’re going to see prepandemic numbers — if not bigger than prepandemic — just because more and more people are getting pent up.”