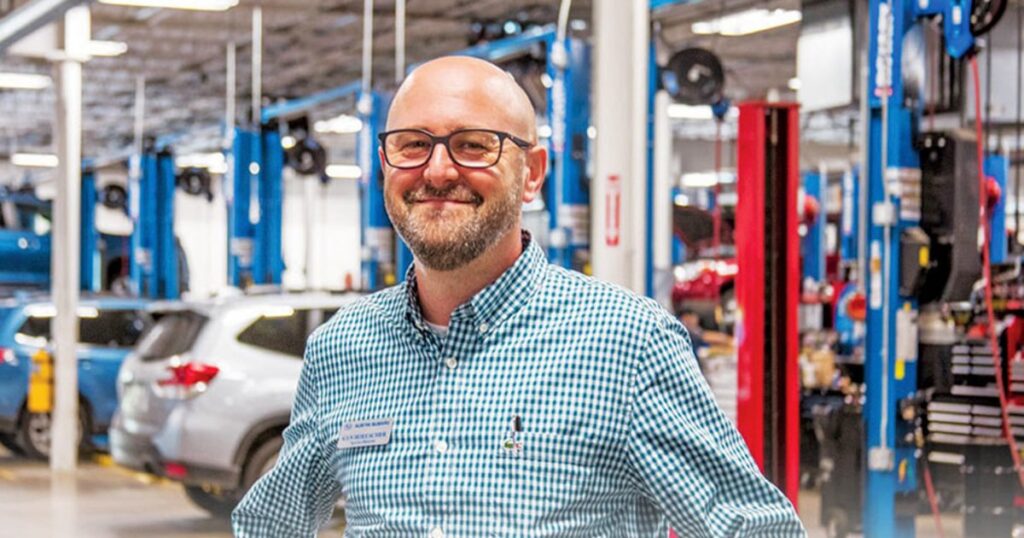 
“It works because you’re seeing it straight from the technicians,” Sandoval said. “With video, suggested maintenance and repairs sell themselves. When we send a customer a video, it’s less of a pushy upsell and more an informational sell for something they can see they need.

“We’d be happy to walk every client into the service bays and show them their cars,” he added. “But we can’t. So instead, these videos connect our clients with our technicians.”

“They love the transparency,” he said. “If we show them a torn bushing or an oil leak, they believe it. The transparency and trust- building that videos provide can’t be quantified; videos bring customers right into the shop with us.”

Hoelscher says one customer posted his multi-point inspection video on Reddit and earned thousands of “likes,” with many commenters saying they wished their dealership filmed inspections.

Both stores use the myKaarma auto-services software platform for texting, emailing and archiving videos. Hoelscher said his department pays about $700 a month for the service; the cost at Austin Infiniti was not available.

After a pilot program for just the express lane technicians, videotaping inspections went departmentwide at the Subaru store in April 2022. The department employs 44 technicians and features 42 service bays, with plans to add 26 more bays, Hoelscher said.

While the average increase for repair orders before the department went all-in on videos isn’t available, Hoelscher said the department has almost doubled its customer-pay revenue from January through October 2022 compared with the same period in 2021.

“We’re the biggest generator of parts and labor revenue out of all Subaru dealers nationwide,” Hoelscher told Automotive News.

“And we calculate that each videographer is worth a lift of about $868,000 in parts and labor revenue” through November 2022.

“We wouldn’t be having such a successful year without our video guys,” Hoelscher said.

At the Infiniti store, which started videotaping multi-point inspections about five years ago, Sandoval said the average lift per RO for customer-pay work from late November 2021 through late November 2022 was $397 based on 4,336 videos. And while he couldn’t compare that number with pre-video figures from years ago, he said he “absolutely” knows the videos make a difference.