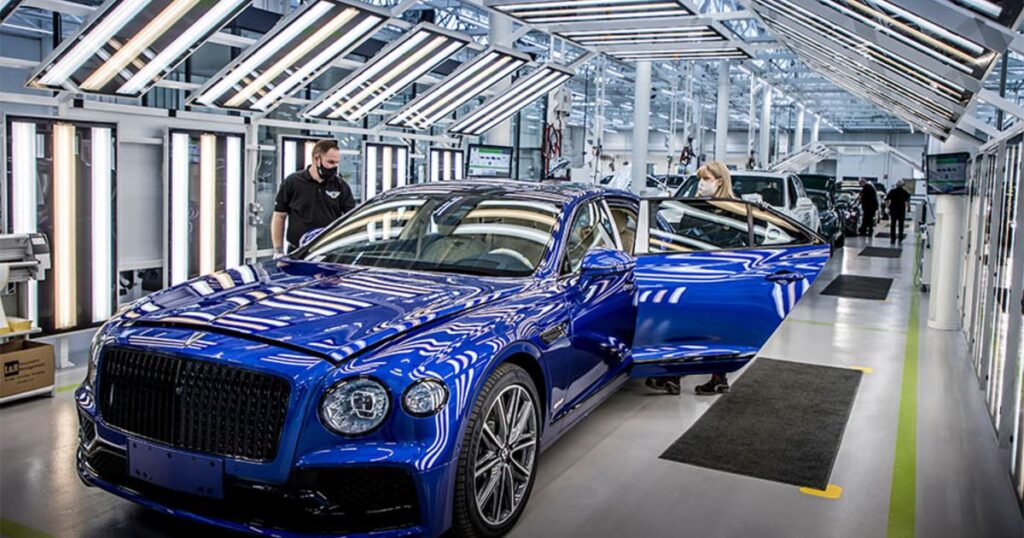 
The idea of cars leapfrogging one another along the production line isn’t new in the world of small-scale UK specialist car manufacturing.

However, that mainly involves bodies mounted on wheeled “dollies” and pushed by employees to the next assembly station.

Bentley’s 10,000-plus annual production has warranted a conveyor belt, but at the expensive of flexibility — and often profit. The automaker believes the AGV system promises the best of both worlds.

Hallmark says Bentley is yet to award supply contracts for the system, but robotics company ABB is one possibility. The Swiss firm is expanding its offering for automakers wanting similar flexibility by creating a system whereby assembly stations are replaced with cells into which bodies are brought by AGVs.

Also replacing conveyor belts with flexible cells is UK electric van startup Arrival, which plans to run its system for the first time later this year as production starts in its first so-called “microfactory.” Its vans are moved cell-to-cell by AGVs, or what it calls AMRs (autonomous mobile robots).

“Because the AMRs don’t follow a predestined path, the order in which the technology cells are used is under software control and can be changed from vehicle to vehicle,” the company wrote in its annual report earlier this year.

This way the company breaks the linear process of assembly and, like Bentley, gets to vary the speed of production and optimize it for the model being produced.

Arrival employed Italian automation specialist Comau for the design and simulation of its microfactory, it said.

The company’s vans have been specially designed for the factory process, rather than the other way around, which the company hopes will increase productivity by making the process simpler. The proof will be in the company’s first production van from its plant in Bicester, southern England, due in the third quarter.

“Automation and robotics are substantial parts of the business. They will impact how we run the factories and how the factories will look in the future,” Kotagiri, who leads the world’s fourth largest supplier, told Automotive News Europe. “This big, big transformation will determine who is going to be successful in the future.”