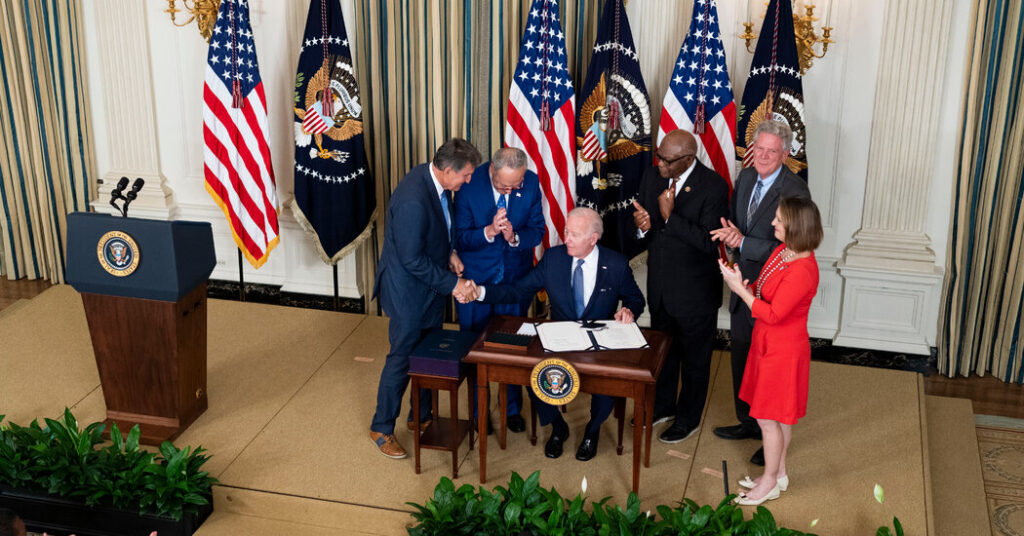 
WASHINGTON — President Biden signed into law a landmark tax, health and energy bill on Tuesday that takes significant steps toward fulfilling his goal to modernize the American economy and reduce its dependence on fossil fuels.

The vast legislation will lower prescription drug costs for seniors on Medicare, extend federal subsidies for health insurance and reduce the federal deficit. It will also help electric utilities switch to lower-emission sources of energy and encourage Americans to buy electric vehicles through tax credits.

What it does not do, however, is provide workers with many of the other sweeping economic changes that Mr. Biden pledged would help Americans earn more and enjoy the comforts of a middle-class life.

Mr. Biden signed the bill, which Democrats call the Inflation Reduction Act, in the State Dining Room at the White House. He and his allies cast the success of the legislation as little short of a miracle, given it required more than a year of intense negotiations among congressional Democrats. In his remarks, Mr. Biden proclaimed victory as he signed a compromise bill that he called “the biggest step forward on climate ever” and “a godsend to many families” struggling with prescription drug costs.

“The bill I’m about to sign is not just about today; it’s about tomorrow. It’s about delivering progress and prosperity to American families,” Mr. Biden said.

Administration officials say Mr. Biden has passed far more of his economic agenda than they could have possibly hoped for, given Republican opposition to much of his agenda on taxes and spending and razor-thin Democratic majorities in the House and Senate. His wins include a $1.9 trillion economic rescue plan last year designed to get workers and businesses through the pandemic and a pair of bipartisan bills aimed at American competitiveness: a $1 trillion infrastructure bill and $280 billion in spending to spur domestic semiconductor manufacturing and counter China.

But there is little dispute that Mr. Biden has been unable to persuade lawmakers to go along with one of his biggest economic goals: investing in workers, families, students and other people.

Both parts of the equation — modernizing the physical backbone of the economy and empowering its workers — are crucial for Mr. Biden’s vision for how a more assertive federal government can speed economic growth and ensure its spoils are widely shared.

Mr. Biden also sees human investment as crucial. The American economy remains dominated by service industries like restaurants and medicine. Its recovery from the pandemic recession has been stunted, in part, by breakdowns in support for some of the workers who should be powering those industries’ revival. The cost and availability of child care alone is keeping many potential workers sidelined, leading to an abundance of unfilled job openings and costing business owners money.

A substantive legislation. The $370 billion climate, tax and health care package that President Biden signed on Aug. 16 could have far-reaching effects on the environment and the economy. Here are some of the key provisions:

Auto industry. Until now, taxpayers could get up to $7,500 in tax credits for purchasing an electric vehicle, but there was a cap on how many cars from each manufacturer were eligible. The new law will eliminate this cap and extend the tax credit until 2032; used cars will also qualify for a credit of up to $4,000.

Energy industry. The legislation will provide billions of dollars in rebates for Americans who buy energy efficient and electric appliances. Companies will get tax credits for building new sources of emissions-free electricity. The package also includes $60 billion set aside to encourage clean energy manufacturing and penalties for methane emissions that exceed federal limits starting in 2024.

Health care. For the first time, Medicare will be allowed to negotiate with drugmakers on the price of some prescription medicines. The law also extends subsidies available under the Affordable Care Act, which were set to expire at the end of the year, for an additional three years.

Tax code. The law introduces a new 15 percent corporate minimum tax on the profits companies report to shareholders, applying to companies that report more than $1 billion in annual income but are able to use credits, deductions and other tax treatments to lower their effective tax rates. The legislation will bolster the I.R.S. with an investment of about $80 billion.

Low-income communities. The package includes over $60 billion in support of low-income communities and communities of color that are disproportionately burdened by climate change. Among the provisions are grants for zero-emissions technology and money to mitigate the negative effects of highways and other transportation facilities.

Fossil fuels industry. The legislation requires the federal government to auction off more public space for oil drilling and expand tax credits for coal and gas-burning plants that rely on carbon capture technology. These provisions are among those that were added to gain the support of Senator Joe Manchin III, Democrat of West Virginia.

Yet Mr. Biden has so far been unable to deliver on many of the programs he proposed to help Americans balance work responsibilities with care for children or aging parents, and to pursue high-quality education from a young age. He could not secure universal prekindergarten or free community college tuition. He could not find support to fund child care subsidies or to extend a tax credit meant to fight child poverty. And his plans to spend hundreds of billions of dollars to expand and improve home health services for seniors and disabled people have also foundered.

Those omissions add up to what liberal economists call a missed opportunity to help Americans work more and earn more, and to make the economy run more efficiently.

Mr. Biden has had more success in getting Democrats, and some Republicans, to invest in the physical economy and to embrace a more interventionist view of federal power, said Lindsay Owens, executive director of the liberal Groundwork Collaborative in Washington. By embracing industrial policy and government-induced emissions reduction, she said, “He’s moved to an economic system and an economic agenda where the government is really throwing its weight around, putting its thumb on the scale,” she said.

But, she added, “we didn’t get the care agenda. That’s a huge miss. Until we get affordable child care, our economy’s not going to be at full strength.”

In Congress, that agenda, which Mr. Biden largely packed into his “American Families Plan,” always faced a much rockier path than the competitiveness efforts in his “American Jobs Plan.” It had almost no support from Republicans, ruling out the bipartisan path that delivered Mr. Biden wins on infrastructure, research and development and domestic manufacturing. And it ran into problems with some Senate Democrats, including Joe Manchin III of West Virginia, who pushed early for Mr. Biden to limit the size and scope of what morphed into the bill Mr. Biden signed Tuesday.

Opposition from another critical Senate Democrat, Kyrsten Sinema of Arizona, forced Mr. Biden to drop much of what he promised would be an overhaul of the tax code to “reward work, not wealth.” He did not, as he repeatedly proposed, end up raising top marginal income tax rates for high earners, or taxing investment returns for millionaires at the same set of rates as income earned from wages, which he had promised would help reduce economic inequality.

The legislation he signed Tuesday is projected to increase taxes by about $300 billion, largely by imposing new levies on big corporations. The law includes a new tax on certain corporate stock repurchases and a minimum tax on large firms that use deductions and other methods to reduce their tax bills. It also bolsters funding for the Internal Revenue Service in an effort to crack down on tax evasion and collect potentially hundreds of billions of dollars that are owed to the government but not paid by high earners and corporations.

Those increases represent only a small slice of the tax revenue from corporations and high earners that Mr. Biden initially offered to fund his agenda.

“On the tax side, the president fell far short of his promises,” said Steve Rosenthal, a senior fellow in the Urban-Brookings Tax Policy Center in Washington. “On the other hand, what he did accomplish was substantial.”

Ben Harris, a campaign economic aide to Mr. Biden who is now the assistant secretary for economic policy in the Treasury Department, said the increased I.R.S. enforcement against tax evasion by high earners and corporations would by itself help balance the tax system in favor of workers.

“The work-not-wealth emphasis was obviously central to his campaign,” Mr. Harris said, “and across the various policies ranging from tax enforcement to the book minimum tax to stock buybacks, the president got a lot of wins out of this bill.”

Other officials defend Mr. Biden’s achievements, which include securing some long-promised programs that are popular with voters but struggle to pass in Washington, like reducing prescription drug costs and improving infrastructure. They note the bills he has signed have sought to use federal purchasing power to drive up wages and promote unionization.

“Every piece of the puzzle is designed in a way to empower workers, empower individuals across the country to make a good living wage,” said Stefanie Feldman, the policy director for Mr. Biden’s 2020 campaign who is now a deputy assistant to the president and senior adviser to the domestic policy adviser.

The bill Mr. Biden signed Tuesday invests $370 billion in spending and tax credits in low-emission forms of energy to fight climate change. It is aimed at helping the United States cut greenhouse gas emissions by an estimated 40 percent below 2005 levels by 2030. That would put the country within striking distance of Mr. Biden’s goal of cutting emissions at least 50 percent over that time period.

It extends federal health insurance subsidies, allows the government to negotiate prescription drug prices for seniors on Medicare and is expected to reduce the federal budget deficit by about $300 billion over 10 years. Administration officials call the health components crucial to millions of workers, and they say the climate components will create high-paying union jobs in an emerging clean-energy economy.

But the climate provision is also instructive for what Mr. Biden has been unable to deliver. Mr. Biden called on Congress to create a civilian climate corps — what he described in his American Jobs Plan outline as a $10 billion effort to create “the next generation of conservation and resilience workers.”

Patterned after the Civilian Conservation Corps of the 1930s, which put more than three million men to work building roads and parks, cutting trails and planting trees across the country, the re-envisioned climate work force was part of a bill that passed the House in November.

It was a direct investment in workers. And after Mr. Manchin walked away from that package and negotiations restarted this year on a new agreement, it was left on the cutting-room floor.

But Mr. Manchin, who hails from a coal state, signed on to a broad swath of other climate provisions. On Tuesday, Mr. Manchin stood behind Mr. Biden as he signed the bill and the president nodded to his crucial role in getting the compromise package passed into law.