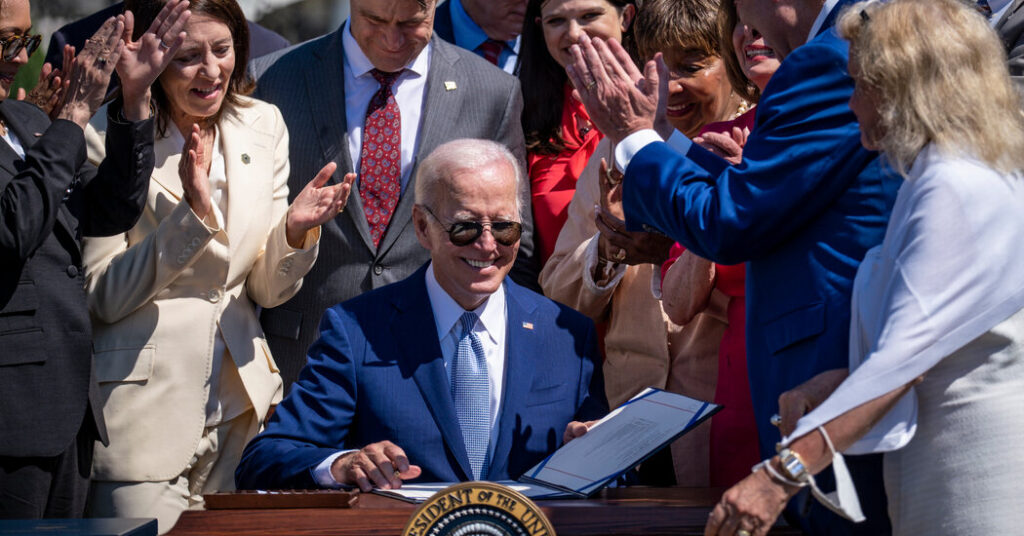 
WASHINGTON — President Biden on Tuesday signed into law a sprawling $280 billion bill aimed at bolstering American chip manufacturing to address global supply chain issues and counter the rising influence of China, part of a renewed effort by the White House to galvanize its base around a recent slate of legislative victories.

Standing before business leaders and lawmakers in the Rose Garden, Mr. Biden said the bill was proof that bipartisanship in Washington could produce legislation that would build up a technology sector, lure semiconductor manufacturing back to the United States and eventually create thousands of new American jobs.

“Fundamental change is taking place today, politically, economically and technologically,” Mr. Biden said. “Change that can either strengthen our sense of control and security, of dignity and pride in our lives and our nation, or change that weakens us.”

The bipartisan compromise showed a rare consensus in a deeply divided Washington, reflecting the sense of urgency among both Republicans and Democrats for an industrial policy that could help the United States compete with China. Seventeen Republicans voted for the bill in the Senate, while 24 Republicans supported it in the House.

While Republicans have long resisted intervening in global markets and Democrats have criticized pouring taxpayer funds into private companies, global supply chain shortages exacerbated by the pandemic exposed just how much the United States had come to rely on foreign countries for advanced semiconductor chips used in technologies as varied as electric vehicles and weapons sent to aid Ukraine.

Read More on the Relations Between Asia and the U.S.

In a sign of how Beijing’s rise drove the negotiations for the legislation, Mr. Biden explicitly mentioned China multiple times during his remarks at the bill-signing ceremony.

“It’s no wonder the Chinese Communist Party actively lobbied U.S. business against this bill,” the president said, adding that the United States must lead the world in semiconductor production.

The bill is focused on domestic manufacturing, research and national security, providing $52 billion in subsidies and tax credits for companies that manufacture chips in the United States. It also includes $200 billion for new manufacturing initiatives and scientific research, particularly in areas like artificial intelligence, robotics, quantum computing and other technologies.

The legislation authorizes and funds the creation of 20 “regional technology hubs” that are intended to link together research universities with private industry in an effort to advance technology innovation in areas lacking such resources. And it provides funding to the Energy Department and the National Science Foundation for basic research into semiconductors and for building up work force development programs.

“We will bring these jobs back to our shores and end our dependence on foreign chips,” said Senator Chuck Schumer, Democrat of New York and the majority leader, who pumped his fists as he stepped toward the lectern.

How Times reporters cover politics.
We rely on our journalists to be independent observers. So while Times staff members may vote, they are not allowed to endorse or campaign for candidates or political causes. This includes participating in marches or rallies in support of a movement or giving money to, or raising money for, any political candidate or election cause.

Mr. Schumer, who helped spearhead the measure, at one point hinted at the yearslong quest to secure its passage when he noted that it had once been called the Endless Frontier Act — one of a handful of names for the bill as it made its way through Congress.

“I’ve always said that Democrats would be ready to work with Republicans when possible,” he added. “And at today’s signing, we celebrate such an accomplishment.”

Democrats are hoping that the passage of the industrial policy legislation and a few other notable bills, along with falling gas prices, can help drive a turnaround for the party ahead of the midterm congressional elections in November. Democrats have faced a bleak outlook heading into the fall, with Mr. Biden suffering from dismal approval numbers amid soaring inflation and painful prices at the pump.

Mr. Biden is planning to sign a bill on Wednesday that would expand medical care for veterans exposed to toxic burn pits on military bases, another measure that Congress approved with bipartisan support. And on Friday, the House is expected to pass the climate, health and tax bill that cleared the Senate over the weekend, handing the president a legislative triumph that he and Democratic candidates can highlight in the weeks to come.

The effort to promote the recent series of victories comes after Mr. Biden was forced to isolate during a bout with Covid-19, followed by a rebound case. He left isolation on Sunday and then traveled on Monday to meet with survivors of the severe flooding in Kentucky, his first work trip since testing positive for the virus on July 21.

At the ceremony on Tuesday, Mr. Biden had a persistent cough during his remarks in the Rose Garden. White House officials said he had tested negative for the virus on Monday and again on Tuesday morning, extending his streak of negative tests to four consecutive days.

Mr. Biden’s aides are now planning to drum up support around the recent legislative successes by dispatching cabinet officials across the country to draw attention to the measures — though there is no guarantee that their efforts will reshape the political dynamics heading into the November elections.

“There were ups and downs, and it was a long path to get here,” Gina Raimondo, the commerce secretary, said at the ceremony. “And the president said don’t give up. Don’t give up. Keep going.”