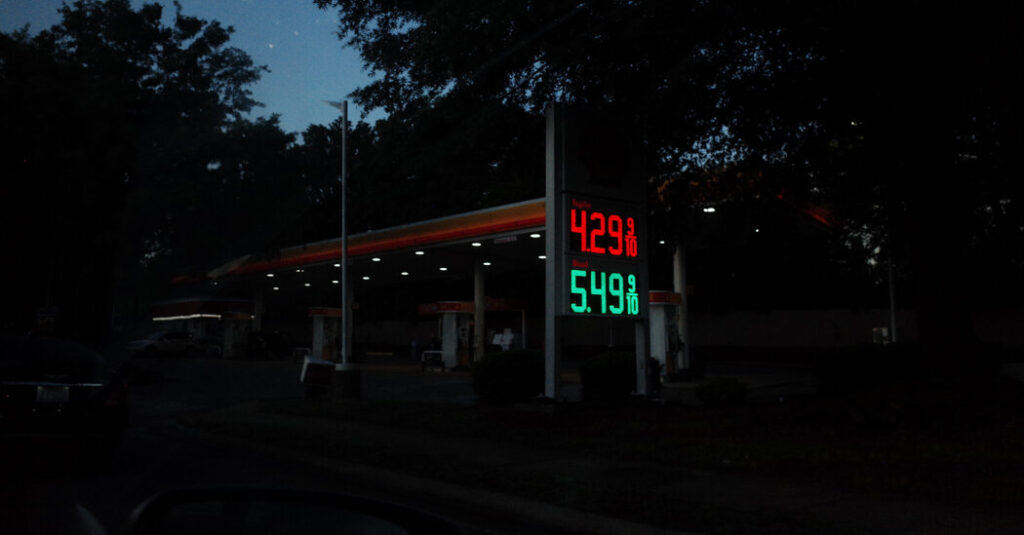 Biden slaps oil companies for profiteering at the pump.


WASHINGTON — President Biden chastised some of the largest oil companies for profiteering off surging energy prices and “worsening that pain” for consumers, as he increased the pressure on them to boost refining capacity and bring down costs at the pump.

With the average price of gas in the United States topping $5 a gallon for the first time, Mr. Biden pointed the finger at energy firms in a letter to seven top executives dated Tuesday. He demanded they explain their decision to limit refining capacity and announced that his administration would hold an “emergency meeting” to discuss ways of stemming the crisis.

“At a time of war, refinery profit margins well above normal being passed directly onto American families are not acceptable,” Mr. Biden said in the letter. “There is no question that Vladimir Putin is principally responsible for the intense financial pain the American people and their families are bearing. But amid a war that has raised gasoline prices more than $1.70 per gallon, historically high refinery profit margins are worsening that pain.”

The letter, which went to executives at BP, Chevron, Exxon Mobil, Marathon Petroleum, Phillips 66, Shell and Valero Energy, extends an effort by the president in recent weeks to pin at least some of the blame on firms raking in billions in profits while deflecting any responsibility from his administration. Rising gas prices have contributed to a slide in Mr. Biden’s approval ratings in advance of the fall midterm elections.

The president argued in the letter that the companies have failed to restore refining capacity that they reduced during earlier days of the pandemic, leaving it at its lowest level in more than half a decade. At the same time, it said that there is “an unprecedented disconnect between the price of oil and the price of gas,” noting that the last time the price of crude hit $120 a barrel, in March, the price of gas at the pump was $4.25. But today, gas prices are 75 cents higher.

“That difference — of more than 15 percent at the pump — is the result of the historically high profit margins for refining oil into gasoline, diesel and other refined products,” Mr. Biden said. “Since the beginning of the year, refiners’ margins for refining gasoline and diesel have tripled, and are currently at their highest levels ever recorded.”

House Democrats passed a bill last month empowering Mr. Biden to declare an energy emergency and crack down on firms deemed to be increasing prices excessively, but it appears unlikely to pass the Senate. Republicans have maintained that Mr. Biden’s energy and climate policies are at least partly to blame for the rising gas prices, accusing the president of undermining America’s energy industry.

Mike Sommers, president of the American Petroleum Institute, countered that the administration shared the blame for higher energy prices and called for approval of new drilling leases and approval of “critical energy infrastructure” like pipelines.

“Ahead of his travel to the Middle East next month,” Mr. Sommers said in a statement, “we urge the president to prioritize unlocking U.S. energy resources that are the envy of the world instead of increasing reliance on foreign sources.”

“It’s part of the combative narrative that it’s the refiner’s fault, the oil companies’ fault,” said Tom Kloza, global head of energy analysis at Oil Price Information Service. “The narrative from the Republicans is it’s all Biden’s fault, and that’s not true. But it’s also not true that refiners have conspired” to raise prices, he said.

The United States has lost 5.9 percent of its refining capacity since 2019, as refineries have reconfigured to produce new products or closed because their expenses outstripped revenues.

At the end of next year, executives plan to close the LyondellBasell refinery in Houston, for example, because they are facing $1.5 billion in expenses to meet Clean Air standards. The company tried to sell the plant, but no one was interested in buying.

The trend is part of a global shift in petroleum processing, which is moving away from North America and Europe and toward Asia and the Middle East, according to Turner, Mason & Company, a Texas consultancy. Refiners have idled at least nine plants over the last three years in the United States. Many could no longer be operated profitably and were refitted to process biofuels.

The Covid pandemic, which undercut demand for fuels as the economy declined, hastened decisions by executives who argued that a recovery of future sales was questionable as government policies favored more efficient and electric vehicles.

No new American refineries have been built in decades.

Holly Frontier, Marathon, PBF, Phillips 66 and Shell are among the refiners that have closed plants in Wyoming, New Mexico, North Dakota, New Jersey, Pennsylvania and Louisiana. Some refiners, like Shell, said they were trying to reduce their emissions of greenhouse gases that cause climate change. Others, like PBF, said the operations they were closing were no longer profitable.

At least four more refineries, in Montana, Oklahoma, Alabama and California, are set for downsizing and conversion from conventional fuels to renewable diesel.

As it tries to bring down oil prices, the Biden administration could loosen permitting regulations to reopen an accident-prone refinery in St. Croix that has a blemished environmental record. Such an action would probably spur strong protests from environmentalists, since the refinery repeatedly released sulfur dioxide in the air and showered a fine mist of oil over surrounding houses.

Global markets for fuels have tightened since the Russian invasion of Ukraine in February, and refineries are struggling to keep up with growing demand as much of the world recovers from the worst of the pandemic.

Overall, there has been less than a one percent increase in refinery capacity worldwide over the last three years. Refinery capacity in Europe has declined 5.7 percent, heightening the continent’s problems as European countries attempt to wean themselves off Russian energy.

That has opened new opportunities for Middle Eastern oil companies, which have increased their refinery capacity by nearly 13 percent over the last three years.