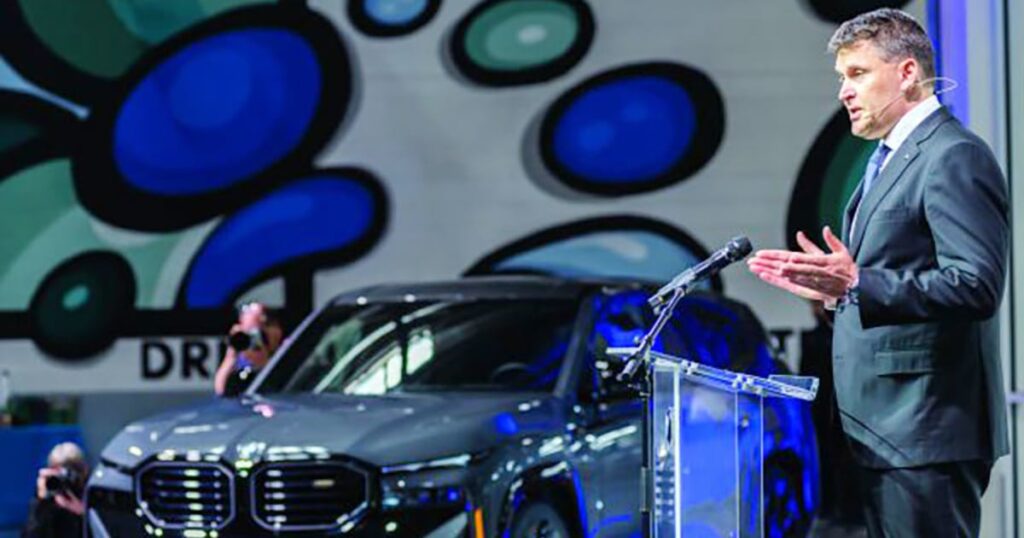 
As Engelhorn gears up U.S. operations for EV production, he will lean into his manufacturing experience in Germany and China. Before his U.S. tour of duty, Engelhorn prepped Plant Munich to produce the BMW i4 electric sedan.

A lot is riding on his shoulders as he readies for the next act.

With an annual capacity of 450,000 vehicles, BMW’s U.S. factory currently exports about 60 percent of its volume.

“Plant Spartanburg has been a cornerstone of the global success of the BMW Group,” Zipse said. “The ‘home of the X’ is also becoming the ‘home of the battery-electric vehicle.’ ”

Retooling for EV assembly begins in 2024. An expansion will increase square footage of Hall 52 by about one-third and boost capacity by about 60 percent, to nearly 290,000 vehicles a year.

The production system layout is built for flexibility, Assembly Manager Johannes Zirngibl told Automotive News. “So if there is a higher market demand … we could produce more volume,” Zirngibl said.

BMW did not reveal which electric models it will build at the plant. But according to AutoForecast Solutions, commercial production of the battery-powered iX5 crossover should start in late 2026, followed by the iX7 a year later. Production of the iX6 and iXM crossovers could begin in 2028.

The assembly plant will be capable of building combustion engine models and fuel cell vehicles alongside EVs.

“Because we are delivering to the world, we have to cope with worldwide market” demand, Engelhorn said, noting the plant supplies 120 countries. “It is our duty to be reactive to customer demands.”

Unlike some of its competitors that are pivoting fully to EVs, BMW anticipates demand for combustion engines will continue. The company expects only about half of its sales to be fully electric by the start of the next decade.

BMW is also exploring other technologies. It will begin limited production of a hydrogen fuel cell version of its X5 midsize crossover at the end of the year.

“We see an increase in the demand for electric vehicles,” Engelhorn said. “But we also see a big demand in plug-in hybrids and sustainable combustion.”