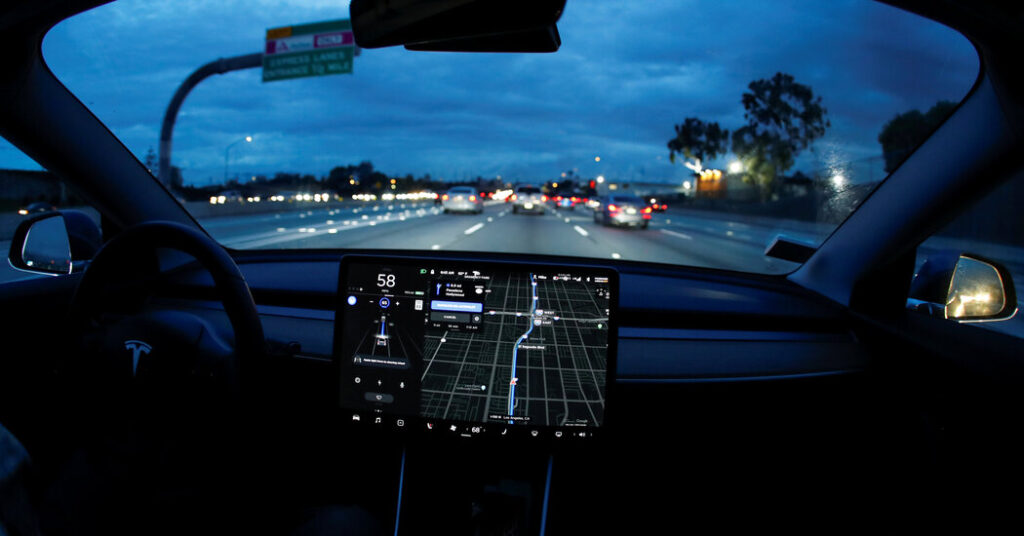 
California’s Department of Motor Vehicles has accused Tesla of falsely advertising its driver-assistance technology in two complaints that could affect the company’s ability to sell cars in the state.

The agency said Tesla had misled customers by claiming in advertisements that vehicles equipped with its Autopilot and Full Self-Driving Capability programs were autonomous. If the agency’s complaints to the state’s Office of Administrative Hearings succeed, Tesla’s licenses to make and sell vehicles in California could be suspended or revoked.

Tesla “made or disseminated statements that are untrue or misleading, and not based on facts, in advertising vehicles as equipped, or potentially equipped, with advanced driver assistance system (ADAS) features,” the agency said in its complaints, which were filed on July 28.

The Los Angeles Times reported earlier on the agency’s complaints, which are separate from its review of Tesla’s vehicle designs and technological abilities.

Tesla’s chief executive, Elon Musk, and a company lawyer did not immediately respond to a request for comment on Friday evening.

As the overall auto market stagnates, the popularity of battery-powered cars is soaring worldwide.

In marketing materials on its website, Tesla said its driver-assistance technology was capable of conducting trips “with no action required by the person in the driver’s seat.” Despite Tesla’s disclaimer that the programs “require active driver supervision,” the claim and others were false and misleading, the agency said.

Available since 2015, Autopilot is a system that can steer, brake and accelerate the company’s cars on its own. But it is designed mainly for use on highways, and the company’s documentation requires drivers to keep their hands on the wheel and take control of the car should the system malfunction.

Its name is borrowed from aviation systems that allow planes to fly themselves in ideal conditions with limited pilot input. With the current system, the car will disengage Autopilot if drivers do not consistently keep a hand on the wheel.

For the typical buyer, the added features are minimal. When they are used on city streets, for instance, the car will stop at a red light, but it will not progress after a green light unless the driver intervenes.

In May, Mr. Musk said about 100,000 Full Self-Driving buyers had access to a “beta” test version of the service that could navigate city streets more extensively — while drivers continued to keep their hands on the wheel in case anything went wrong. He also said Full Self-Driving would be “feature complete” by the end of the year and available to about a million car owners.

At the end of 2015, the year Autopilot debuted, Mr. Musk began saying Teslas would drive themselves within two years. In the years since, he has repeatedly claimed that such an ability was just a year or two away.

“There are just so many false dawns with self-driving,” he said in May. “You think you have a handle on the problem and then — nope — it turns out you just hit a ceiling.”

The National Highway Traffic Safety Administration, the country’s leading auto safety regulator, is investigating Autopilot after becoming aware of 35 crashes involving the system, including nine that resulted in 14 deaths. Its investigation covers 830,000 vehicles sold in the United States and will look at Full Self-Driving as well as Autopilot.

Tesla has until next Friday to dispute or otherwise respond to the California Department of Motor Vehicles’ accusations.