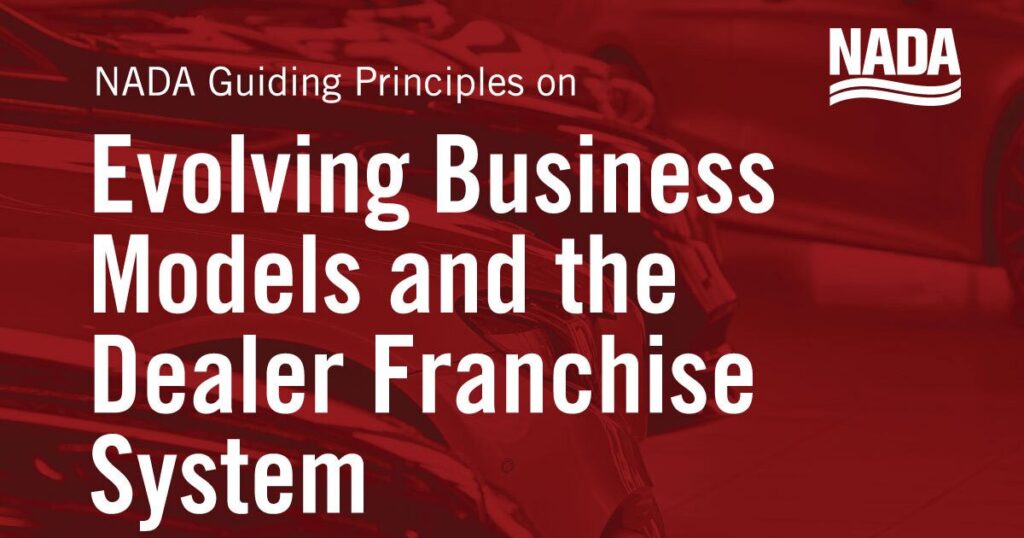 
The National Automobile Dealers Association’s guidelines on the changing auto retail industry can help state associations, leaders say, but the national guidelines will need to keep changing, too.

Some state dealer association leaders were consulted as NADA drafted a set of guiding principles that advocate for the franchise model. It lays out NADA’s position on such things as vehicle reservation programs and selling vehicles directly without franchised dealers.

The guidelines are useful, but they, too, will need the flexibility to continue to change along with the industry, said Brian Maas, president of the California New Car Dealers Association.

“One thing that NADA has made clear is that these are designed to evolve, so if things change, then we can change the principle to reflect that change,” said Maas, who offered input to NADA during the drafting process. “The idea is these are living documents.”

NADA’s framework outlines the association’s stance on shifting state regulations around how vehicles are sold and automakers’ early efforts with build-to-order programs and with over-the-air sales of vehicle features. NADA leaders told Automotive News that the principles are meant to be a starting point for conversations between dealers and automakers.

They also could be used to begin discussions with policymakers in state capitals, where dealer franchise legislation is debated, Maas said.

“NADA is clear from the start that this is not a model legislation,” he said. “These are things that pretty much all dealers across the country can agree on. How we choose to address that in the jurisdiction that we’re in may be slightly different, but the hope is that you can overlay the principles in all 50 states and Washington [D.C.] and you can see that everything starts from the same place.”

NADA’s role is not to actively lobby for or against state legislation, said Maas and Don Hall, CEO of the Virginia Automobile Dealers Association, who also provided early input. But they said the principles could offer a unified message at the national and state levels, and NADA could provide additional resources to state dealer associations in terms of financial and legal help.

Hall said NADA under CEO Mike Stanton has “greater enthusiasm to help the states where NADA can.”

But it can do more, including adopting a more assertive role and providing more financial and legal help to states on legislative issues.

“Various states lack the resources, oftentimes, to take on a well-funded, well-heeled OEM,” Hall said. “And so [NADA] can provide resources in terms of communication pieces that we use to educate legislators with, research on economic impacts of decisions and legislation, they can provide lawyer insights that will help the states do a better job.”