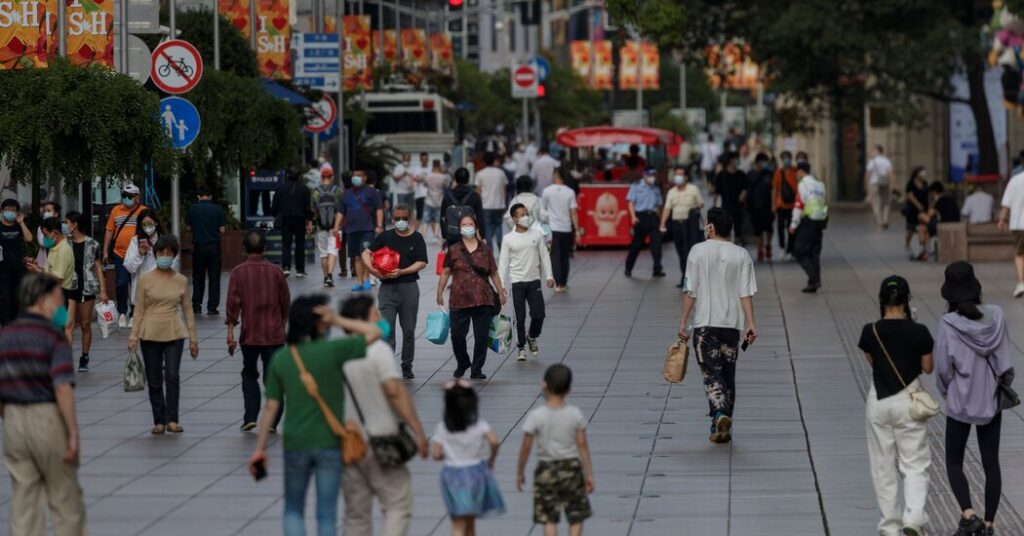 China’s Economy Stumbles in the Fog of Covid War


China’s economic engine has shuddered in recent months, hurt by lockdowns imposed to curb the spread of Covid. Housing sales sagged. Many shops and restaurants in some cities shuttered, some maybe for good. Youth unemployment climbed.

The slowdown has kindled doubts about the viability of China’s stringent strategy of eliminating virtually all Covid infections — whether the cure is becoming worse than the social and economic costs of restrictions. But on a recent visit to Wuhan, the city where the pandemic first took hold, China’s leader, Xi Jinping, said that extinguishing Covid remained paramount.

“It would be preferable to have a little temporary impact on economic development, rather than let the physical safety and health of the public suffer,” Mr. Xi said, state media reported. He cited the need to protect older adults as well as children from infection, and warned officials against becoming weary of the grinding two-and-a-half-year war against Covid. “Persistence,” he said, “is victory.”

That elusive victory over Covid has been made harder by the fast-moving Omicron variant — and its sub-variant, BA.5, the first domestic cases of which emerged last week in China — that is slipping through the country’s many defenses.

A month after Shanghai lifted its citywide lockdown, fresh Covid cases have emerged there in recent days, prompting officials to order many of the city’s 25 million residents to undergo testing. Anhui Province in eastern China enforced a virtual lockdown on two counties, and neighboring Jiangsu Province, a manufacturing heartland, is scrambling to contain new infections. Xi’an, a city of 13 million, has closed schools and many businesses after a flare-up.

Like swatting flies with a shovel, China’s Covid strategy can be effective, but also costly and contentious. It entails locking down apartment blocks, neighborhoods or even whole cities for days or weeks to stamp out even handfuls of cases. As a result, Mr. Xi’s insistence on Covid zero, or “dynamic zero” as Beijing calls it, has cast an unsettling shadow over the country’s economic expectations.

The Chinese government is scheduled to release the main economic data for this year’s second quarter on Friday. According to a survey by Bloomberg, economists expect that the Chinese government will report that gross domestic product grew by about 1 percent in the second quarter, compared with the same period a year earlier. That’s a big comedown from the 4.8 percent expansion in the first quarter, and is likely to put the government’s 5.5 percent growth goal for all of this year out of reach.

“Uncertainty is the main factor hurting our national economic development,” Yang Weimin, an economist who advises the Chinese government, said in a speech in late June to property developers, citing questions around Covid and pandemic prevention measures. He also pointed to investor wariness after crackdowns on companies accused of abusing their market dominance, flouting regulators or offending official moral codes.

“Uncertainty is the great enemy of action,” Mr. Yang said.

Mr. Xi wants officials to extinguish Covid outbreaks while also shoring up the economy. In Wuhan, he visited a laser equipment plant, hailing the potential of new technologies, and also visited a neighborhood that has been promoted as a model of effective Covid controls.

In practice, officials struggle with the diverging demands of Covid controls and economic recovery. The resulting strains are bearing down on China months before a Communist Party congress when Mr. Xi is almost certain to win another five-year term as the party’s leader, consolidating his status as its most powerful leader since Deng Xiaoping and Mao Zedong.

Beijing has tried to boost confidence among entrepreneurs and consumers so they spend, invest and travel. But local officials, faced with the threat of dismissal for lapses in pandemic controls, often impose additional checks and restrictions on travelers and transport, adding to the disruptions and uncertainty.

“Often, the heads of different departments and companies attend one meeting in the morning about enhancing dynamic zero, and then in the afternoon a meeting about economic growth,” said Wu Qiang, an independent political commentator in Beijing.

“The tensions are within Xi’s own model for governing the country,” he said. “The tensions really arise from him.”

For the past two years, many Chinese people have accepted the Covid restrictions as irksome but necessary. But employees and employers appear increasingly impatient over lockdowns, checks and uncertainties, especially when they have loans, rent and wages to pay.

“The local government said for sure that they would get to zero in half a month, but I reckon half a month won’t be enough,” Wang Yongguan, who makes a living grouting walls, said in a telephone interview from Sixian County in Anhui Province, which went into lockdown. He also worried about the accompanying slump in home sales. “This year won’t be any good. It wasn’t to begin with.”

Policymakers trying to bolster investor confidence also fear they will be accused of undermining Mr. Xi’s policies to clean up companies accused of malfeasance and reckless investment, said Christopher K. Johnson, the president of the China Strategies Group, citing conversations with officials in Beijing.

“Does the boss really want to relent on some of these crackdowns, or is it temporary?” Mr. Johnson said, referring to Mr. Xi. “There’s a lot of uncertainty.”

China’s stop-start Covid restrictions may continue into next year at least, in part because the government has focused on restrictions and testing over vaccinations. Older adults have a relatively low vaccination rate. The Chinese leadership has so far refused to approve more effective, foreign-developed vaccines — a decision driven by political pride rather than medical considerations, many experts say.

Yet Chinese leaders also worry that a deep slowdown could cause social discontent, an anxiety magnified by the impending party congress. Officials are under particular pressure to contain unemployment, which among urban residents age 16 to 24 rose to 18.4 percent in May, according to China’s National Bureau of Statistics. More than 10 million college graduates, a record number, are joining the job search this year. Others will take refuge in graduate school.

Even in Beijing, which has avoided a citywide shutdown by imposing only limited restrictions, business can be tough. Wang Jing said his restaurant in an alleyway usually crowded with tourists had lost more than 90 percent of its income in May, when Beijing banned dining in restaurants. The limits eased in early June, but only about a third of business has come back.

“This year is for sure the toughest we’ve had,” he said. “All my waiters have been with me for more than 10 years. They have young and old to take care of, and are waiting for me to issue wages. How could I ever fire them?”

China has been edging toward some policy compromises. Officials halved the days of quarantine imposed on international travelers and close contacts to try to reduce some of the disruption. Mr. Xi and the premier, Li Keqiang, have also obliquely hinted that annual growth might be lower than the target of 5.5 percent that the government set earlier this year. Some former officials and policy advisers have openly said that businesses need more clarity to sustain an economic recovery.

“Our hearts can’t be riding on waves, bobbing up and down. That’s bad for economic growth and social development,” Hu Deping, a former vice chairman of All-China General Chamber of Industry and Commerce, said in a speech to Chinese private business owners in June. “Entrepreneurs will gain confidence only when there are no policy contradictions.”

Even if China is able to contain Covid without putting major cities under lockdowns, the accumulated uncertainty is prompting some companies to rethink their plans.

For Citrosuco, a Brazilian juice maker, business had been going well until Shanghai locked down in April. Its containers of frozen orange juice sat at the city’s port, held up by customs inspectors checking goods for the presence of the virus, said Joshua Lim, a general manager for the company in the city.

“They are asking questions like, how can we better protect our business?” he said. “If we invest now, what will the payback look like and what other risks will we be blindsided by?”