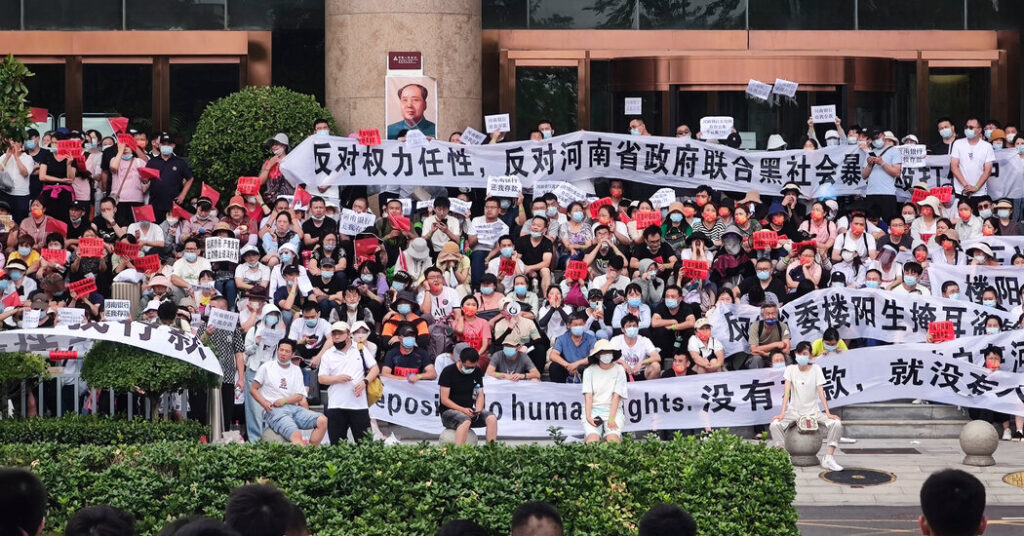 
BEIJING — The saving opportunity with the rural bank in central China looked, to Sun Song, a 26-year-old-businessman, like a great find. It would be linked to his existing account at a large, reputable state-owned bank. The rural bank was also offering high interest rates, making it seem like an ideal place to park his roughly $600,000 in savings.

Then the bank abruptly froze his account this year, and officials said they were investigating potential fraud. “I owe money on my credit card and have to repay my car loan,” he said. “I have two sons. They’re all waiting.”

The financial scandal ensnaring Mr. Sun and thousands of others across the country could pose a serious test to the ruling Communist Party, which prizes stability and its ability to control any threats to it. While the amount of money at risk is small relative to China’s economy, it strikes at the core promise of the party that it will provide a better future for the people.

For members of the Chinese public, it has revealed how vulnerable their money could be, even in a transaction as seemingly routine as putting it in a saving account. Financial issues are all the more sensitive as the economy weakens, with China last week reporting its slowest rate of growth since the beginning of the coronavirus pandemic.

Many are just as unnerved by the local government’s indifferent, if not outright hostile, response to the scandal. The crisis has engulfed five rural lenders that the police say may have been controlled by a criminal gang that illegally transferred funds into other accounts, a scheme that started a decade ago.

Officials have mostly refused to guarantee the money will be returned and have suggested that some of the depositors were involved in fraud. When Mr. Sun and hundreds of other depositors gathered this month for a protest in Henan Province, where the rural banks in question were mostly located, they were physically attacked by a mob of men while police officers stood by. Many protesters have since reported being harassed by the police.

“The government takes our taxpayer money and then beats us,” Mr. Sun said in a phone interview before the authorities warned depositors against speaking to the media. “My worldview has been destroyed.”

Maintaining public trust in the Communist Party is especially crucial this year, when China’s leader, Xi Jinping, is expected to tighten his authority even further at a major political meeting in the fall. But it is already being tested by the economic slowdown, born in part of the government’s draconian campaign against the coronavirus and a regulatory crackdown on the once-booming real estate industry. This banking scandal has exposed more systemic issues in China’s financial system, including potential corruption and weak regulatory oversight at rural banks.

“If they cannot trust any of the banks anymore, and they already don’t trust the housing market, then what would that do to people’s sense of security about their livelihoods?” said Zhiwu Chen, a professor of finance at the University of Hong Kong. “The extent of this anxiety shared by people is increasing very fast. It’s not good for social stability.”

The sensitivity of the issue was clear in the unusually large protests.

The depositors began complaining in April when the banks in Henan and Anhui Provinces suddenly froze electronic withdrawals. Rural banks have helped fill the gap in financial services in China’s less developed areas, but they are also more susceptible to corruption, experts said. To compete with bigger institutions, some also engage in excessively risky lending practices.

The authorities have not said how much money was frozen, but protesters claim the number is as high as billions of yuan. The banks had attracted users from around China — like Mr. Sun, who lives in a southern city — via third-party online platforms and by offering unusually high interest rates.

As weeks went by without resolution, some bank customers began to gather in Henan’s provincial capital, Zhengzhou, for a series of protests demanding that regulators act more forcefully.

Push back against surveillance state. As China builds up its surveillance apparatus, it is facing growing unease about the lack of safeguards to prevent the theft or misuse of personal data. Beijing’s move to censor news about one of the largest known breaches of a Chinese government computer system showed keen awareness of how security lapses can harm its credibility.

Many of the demonstrators presented their demands as appeals, rather than challenges, to the Communist Party’s authority. Some waved Chinese flags. Others invoked Mr. Xi’s slogan of the “Chinese Dream” or carried a portrait of Mao Zedong. They were met with ferocity all the same. Men in plainclothes began hitting and kicking the protesters.

Footage of the violence, which was viewed tens of millions of times on Chinese social media, provoked widespread fury. Commenters said the government had betrayed the protesters’ faith. Censors blocked trending hashtags, but users created new ones.

As the outrage continued, regulators promised last week to repay the depositors — but only those who had put in less than 50,000 yuan, about $7,500, with details for the rest to be announced later. They also said they would not repay anyone who had used “additional channels” to obtain higher interest payments or those suspected of dealing with “illegal funds.”

Those stipulations were seemingly a nod to the police’s announcement about the suspected criminal gang. According to the police, the gang’s scheme included setting up illegal online platforms to solicit new customers.

Huang Lei, a lawyer in the eastern city of Hangzhou who has worked on fraud cases, said people who had unknowingly participated in an illegal scheme should still be entitled to repayment. But he acknowledged that, in reality, they might have little recourse.

“The other party is eager to characterize it as illegal — they’ve described it four or five different ways — because they don’t want to take responsibility,” he said of the authorities. Even if the depositors sued for repayment and won, he added, the bank might not have adequate assets to make them whole, and it was unclear if the state would make up the difference.

Indeed, the scandal has raised broader questions about who is accountable for the lost money, besides the suspected criminals.

Historically, the resulting losses were manageable, because the central government was willing to bail out troubled banks and businesses, he said. But recently, the government has signaled that those days are over, even as the deteriorating economy has put more pressure on those same institutions. As a result, Professor Chen said, “I expect to see more rural banks having to face the same kind of problems as the Henan rural banks.”

There are most likely hidden debts spread across China’s financial sphere. The country’s seemingly unstoppable growth over the past few decades had encouraged speculative borrowing and lending behavior by everyone from online lenders to major real estate companies.

The government has sought to downplay concerns about a broader problem. China’s central bank said last week that 99 percent of China’s banking assets were “within the safe boundary.”

Still, it will now be up to the government to decide how to address the losses both in Henan and those yet to be revealed, said Michael Pettis, a professor of finance at Peking University. Officials could allow institutions to default, hurting lenders; they could squeeze workers; they could print more money, leading to inflation. In the end, Professor Pettis said, “somebody’s got to absorb the loss.”

For the Henan depositors, the fear is that it will be them.

Wang Xiaoping, a 39-year-old software industry employee from Hangzhou, said she had put about $95,000 into one of the rural banks. But all she had to show for it was an injured chin, from being attacked by a man wearing black at the Zhengzhou protest. She tried to report the assault to the police, but they told her to go to another district, she said.

“I told the police, I’m willing to die here,” she said in an interview on July 10. “This is my entire net worth, this is all of my paychecks put together, and it’s gone just like that.”