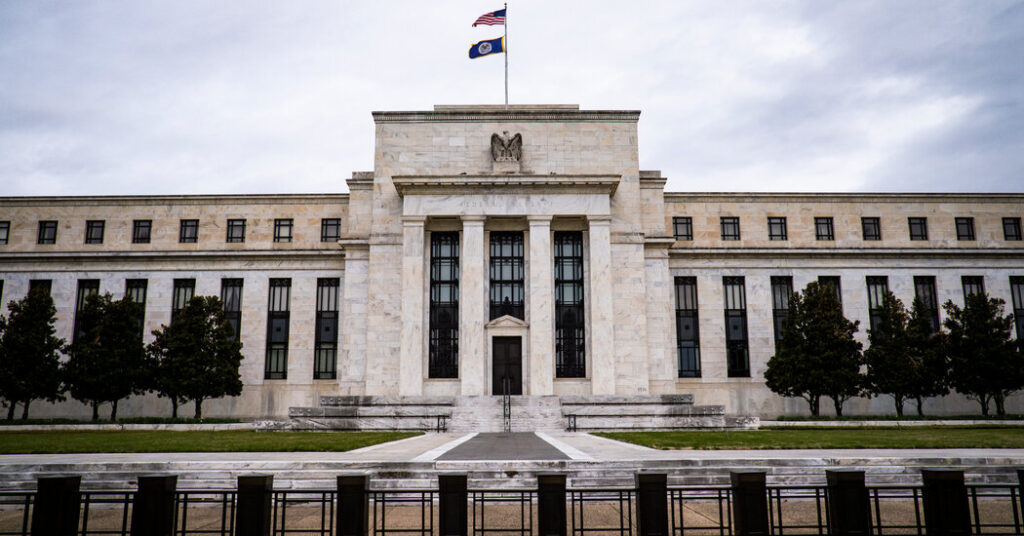 Cooling the Economy Without Crushing It


Eyes on the Fed

This week, the Federal Reserve will decide on its next move for interest rates. The decision, expected to be announced on Wednesday, will almost certainly be to raise its benchmark rate. The U.S. economy is facing its worst bout of inflation in four decades, and higher interest rates are likely to slow the economy and ease price increases. But how much remains a question.

Many on Wall Street believe that the Fed is likely to raise interest rates by as much as a full percentage point. If that happens, it would be the first time the Fed has raised rates that much in one meeting since at least the 1980s. The central bank has vowed to do whatever it takes to lower inflation — much like it did in the 1980s under Paul Volcker.

The Fed’s express goal, however, is to cool the economy without crushing it. In an op-ed yesterday in The Wall Street Journal, Senator Elizabeth Warren of Massachusetts writes that the Fed’s interest-rate hikes “won’t address many causes of today’s inflation,” including skyrocketing energy prices. Other signs of economic stress that may keep the Fed from going for a full percentage point increase:

Still, some argue that there is room for interest rates to move higher without causing an economic crash. Peter Berezin, a global strategist at BCA Research, argues that job openings, as well as solid reserves at most large banks, should buffer the economy from a recession even if the Fed raises interest rates. What’s more, the expiration of pandemic-related aid should slow the excess money injected into the U.S. economy.

“The odds of recession in the U.S. are lower than widely perceived,” Berezin wrote in a note to clients on Friday. In Europe, on the other hand, the probability is higher, he said.

Congo will allow auctions of oil and gas blocks, a major step back for efforts to curb global warming. The Democratic Republic of Congo, home to one of the largest old-growth rainforests, is auctioning off vast amounts of land in a push to become “the new destination for oil investments,” part of a global shift as the world retreats on fighting climate change in a scramble for fossil fuels. The oil and gas blocks, which will be auctioned by the end of this month, extend into Virunga National Park, the world’s most important gorilla sanctuary, as well as tropical peatlands that store vast amounts of carbon, keeping it out of the atmosphere and from contributing to global warming.

Former Mayor Mike Bloomberg of New York City proposes an overhaul of the Democratic primaries. Under his plan, the battleground states would have more prominence in the primaries. “The party’s best hope for success lies in creating a primary calendar that reflects the importance of cities, diversity, open balloting and swing states,” he said in an op-ed yesterday in The Hill.

The C.E.O. of China Evergrande resigns after loans come under scrutiny. Once China’s biggest property developer, the company has struggled to pay down debts of more than $300 billion to creditors after the government forced debt-laden real estate firms to curb borrowing. The resignation of the company’s C.E.O., Xia Haijun, was the latest setback for the embattled developer, which is expected to announce a plan to restructure its debt.

The Senate will vote today to advance a package of subsidies and research funding to increase chip production and U.S. competitiveness. The broad bipartisan bill has gained traction as part of efforts to counter China’s technological and manufacturing dominance. Final passage of the $280 billion package is expected tomorrow or Wednesday.

Apple, Amazon and Google (via YouTube) are competing to pay billions for the rights to broadcast the N.F.L.’s Sunday evening game live on their streaming services. The current broadcaster of the weekly game, DirectTV, reportedly loses about $500 million a year airing the matchup, and has decided not to try to renew its contract with the league. Yet the tech giants, eager to force their streaming businesses into the market for live sports, may pay as much as $2.5 billion a year for the broadcasting rights.

The tech giants see live sports as ripe for disruption, report The Times’s Tripp Mickle, Kevin Draper and Benjamin Mullin. Their interest is a thrill for sports leagues, but it’s also a terror for the media companies that have traditionally broadcast live events. “It’s hard when you’re competing with entities that aren’t playing by the same financial rules,” Bob Iger, the former chief executive and chairman of the Walt Disney Company, which controls ESPN, said, referring to tech companies’ bankroll.

Apple is considered the front-runner. The iPhone maker has made winning the package a priority, even though Amazon, ESPN+ and YouTube also still appear to be in the running. Tim Cook, Apple’s chief executive, has met with league officials and influential team owners like Jerry Jones of the Dallas Cowboys, and the Kraft family of the New England Patriots, according to three people familiar with the process. Apple declined to comment.

Apple and Amazon are trying to position themselves for a future without cable. Since 2015, traditional pay television has lost a quarter of its subscribers — about 25 million homes — as people traded cable packages for apps like Netflix and Hulu, according to MoffettNathanson, an investment firm that tracks the industry.

But the price of live sports rights is projected to only increase. The biggest media companies, including Disney, Comcast, Paramount and Fox, are expected to spend a combined $24.2 billion for rights in 2024, according to data from MoffettNathanson, nearly double what they spent a decade earlier.

And the interest in live sports is a departure for the streaming industry. For years, many executives agreed with Reed Hastings, the chief executive of Netflix, who said that his company was not interested in sports or news because it was watched just once — live — and never watched again. But many streaming companies are reconsidering as competition for subscribers intensifies, stock prices have tumbled and profitability for many remains out of reach. “It comes down to a Silicon Valley ego thing,” Daniel Cohen, who leads global media rights consulting for Octagon, a sports agency, told The Times of the high-dollar N.F.L. deal. “I don’t see a road to profitability. I see a road to victory.”

“This is total bs. Sergey and I are friends and were at a party together last night! I’ve only seen Nicole twice in three years, both times with many other people around. Nothing romantic.”

— Elon Musk, in a tweet responding to a report by The Wall Street Journal that he had an affair with the wife of his longtime friend and the Google co-founder Sergey Brin. The allegation come as Musk is facing a number of business challenges, including a court battle with Twitter.

Selling shares of your future self

Two entrepreneurs, the brothers Daniil and David Liberman, are testing out a new concept: Selling stakes in their financial futures, writes Nathan Heller of The New Yorker. Their entity, Libermans Co., holds all the income from their enterprises, as well as debts, assets and profits they may gain, and investments they might make or start in the next three decades.

Heller writes that the Libermans so far have traded around 3 percent of their futures, which investors have valued at $400 million. The brothers are in conversation with the S.E.C. to list on the stock market and believe they can use this idea as a way to address economic inequality. The first investor to buy shares was Sam Lessin, a venture capitalist at Slow Ventures, who had previously tried to get investors interested in the idea of “venture capital for people,” according to The New Yorker article.

“Young people now create personal brands online and trade cryptocurrencies, N.F.T.s, and other unregulated direct-market products to try to make a buck,” Heller writes. “The Libermans and their idea of helping others get ahead by selling futures on the market are the avatars of this era’s desperate reach.”