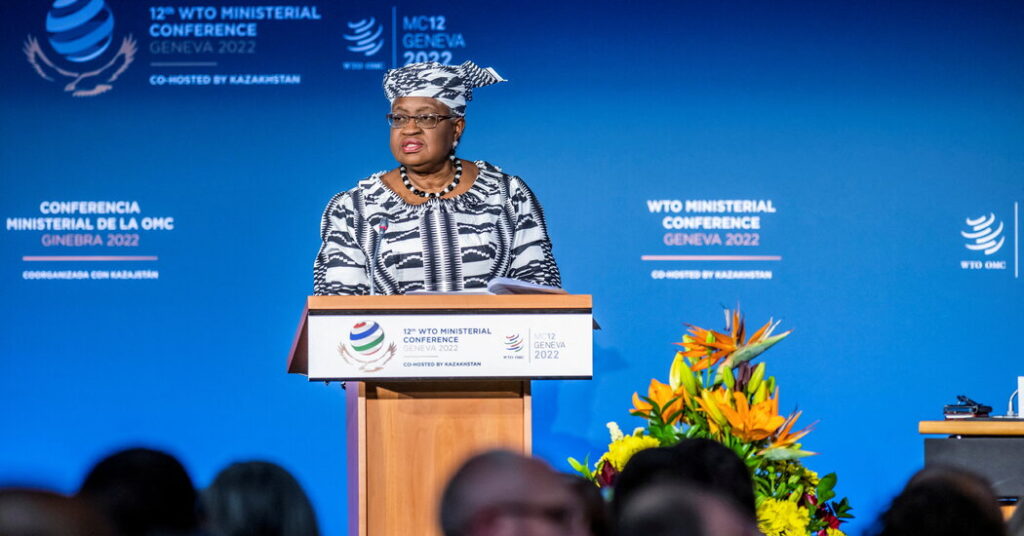 
WASHINGTON — Members of the World Trade Organization announced several agreements on Friday at the close of their first in-person ministerial conference in four years, pledging to rein in harmful government policies that have encouraged overfishing and relax some controls on intellectual property in an effort to make coronavirus vaccines more widely available.

The agreements were hard fought, coming after several long nights of talks and extended periods when it appeared that the meeting would yield no major deals at all.

“It was like a roller coaster, but in the end we got there,” Ngozi Okonjo-Iweala, the director general of the World Trade Organization, said at an early-morning news conference in Geneva after the group’s members approved the final package of agreements.

The deals were an important success for an organization that has come under fire for being unwieldy, bureaucratic and mired in disagreement. But several of the government officials, business leaders and trade experts who descended on the trade body’s headquarters on the shores of Lake Geneva this week described the agreements as the bare minimum and said that the trade organization, while still operational, was hardly thriving.

Wendy Cutler, a vice president at the Asia Society Policy Institute and a former trade negotiator, wrote in an email that the deals, “when packaged together, are enough to claim success but by no means suggest that the W.T.O. has turned a corner.”

Ministers ended up stripping out some of the most meaningful elements of a deal to combat harmful subsidies for fishers that have depleted global fish stocks, Ms. Cutler said, and the pandemic response was “too little, too late.”

The outcomes “seem particularly meager in light of the grave challenges facing the global economy, ranging from sluggish growth to a serious food crisis to climate change,” she said.

To address the growing food crisis around the world, which has been brought on by the pandemic and the war in Ukraine, the group’s members made a mutual declaration to encourage trade in food and try to avoid export bans that are exacerbating shortages.

The trade organization also agreed to temporarily extend a ban on taxes or customs duties on electronic transmissions, including e-books, movies or research that might be sent digitally across borders. But the debate was difficult and protracted over an issue that many businesses and some government officials argued should be low-hanging fruit.

“Ministers spent the entire week preventing the demise of the e-commerce moratorium, instead of looking ahead at how to strengthen the global economy,” said Jake Colvin, the president of the National Foreign Trade Council, which represents major multinational businesses.

One of the trade body’s biggest accomplishments was reaching an agreement to help protect global fishing stocks that has been under negotiation for the last two decades.

Governments spend $22 billion a year on subsidies for their fishing fleets, often encouraging industrial fishing operations to catch far more fish than is sustainable, according to the Pew Charitable Trusts. The agreement would create a global framework for sharing information and limiting subsidies for illegal and unregulated fishing operations, as well as for vessels that are depleting overfished stocks or operating on the unregulated high seas.

In the organization’s over 25-year history, the deal was only the second agreement on adjusting trade rules to be signed by all of the body’s members. And it was the group’s first agreement centered on environmental and sustainability issues.

Isabel Jarrett, manager of the Pew Charitable Trusts’ project to reduce harmful fisheries subsidies, called the agreement “a turning point in addressing one of the key drivers of global overfishing.”

“Curbing the subsidies that drive overfishing can help restore the health of fisheries and the communities that rely on them,” she said. “The W.T.O.’s new agreement is a step towards doing just that.”

But others expressed disappointment. “Our oceans are the big loser today,” said Andrew Sharpless, the chief executive of Oceana, a nonprofit group focused on ocean conservation. “After 20 years of delay, the W.T.O. failed again to eliminate subsidized overfishing and in turn is allowing countries to pillage the world’s oceans.”

As part of the agreement, negotiations will continue with the goal of making recommendations on additional provisions to be considered at next year’s ministerial conference.

World Trade Organization members also agreed to loosen intellectual property rules to allow developing countries to manufacture patented Covid-19 vaccines under certain circumstances. Katherine Tai, the U.S. trade representative, said in a statement that the trade organization’s members “were able to bridge differences and achieve a concrete and meaningful outcome to get more safe and effective vaccines to those who need it most.”

The issue of relaxing intellectual property rights for vaccines had become highly controversial. It pitted the pharmaceutical industry and developed countries that are home to their operations, particularly in Europe, against civil society organizations and delegations from India and South Africa.

While the parties were able to reach a compromise, the divide remained so deep that both sides criticized the outcome.

Stephen J. Ubl, the president and chief executive of the Pharmaceutical Research and Manufacturers of America, said the agreement had “failed the global population.” Global vaccine supplies are currently plentiful, he said, and the agreement did little to address “real issues affecting public health,” such as supply chain bottlenecks or border tariffs on medicines.

Lori Wallach, the director of the Rethink Trade program at the American Economic Liberties Project, called the outcome “a dangerous public health fail” and “a vulgar display of multilateralism’s demise” in which a few rich countries and pharmaceutical companies blocked the will of more than 100 countries to improve access to medicines. The agreement did not loosen intellectual property rights for treatments or therapeutics, as civil society groups had wanted.

Divisions between rich and poor countries and between big business and civil society groups were apparent in other negotiations, which were also overlaid with the geopolitical challenges of a global pandemic and the Russian invasion of Ukraine.

The World Trade Organization requires consensus from all of its 164 members to reach agreements, and India emerged as a significant obstacle in several of the negotiations, including over e-commerce duties and fishery subsidies.

Mr. Colvin said the requirement of unanimous consent had put severe limits on the trade body’s ability to produce meaningful outcomes. “The system is set up to reward hostage-taking and bad faith,” he said.