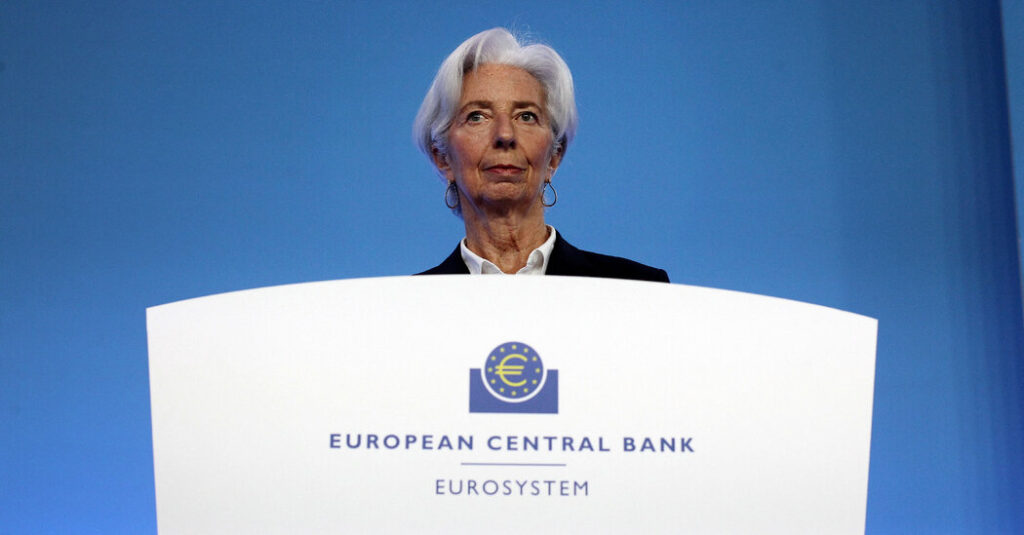 Decision Day for the E.C.B.

The European Central Bank increased its benchmark interest rates today for the first time in a decade, as inflation surges across countries that use the euro. The bank’s benchmark interest rates, before the increase, had been a negative 0.5 percent. Europe’s central bank raised those rates today by half of a percentage point or back to zero. It first set the rate below zero, an unusual move for a central bank, in 2014, and has kept it in negative territory since.

Today’s move is the crucial next step in ending the E.C.B.’s era of ultra-loose monetary policy. The bank has already ended its multitrillion-euro programs to buy bonds, and after eight years, the end of its policy of negative interest rates — aimed at prompting banks to lend generously — is in sight, writes The Times’s Eshe Nelson.

Consumer prices are soaring at their fastest rate in a generation, climbing 8.6 percent in June from a year earlier in the face of rising energy and food costs. Nearly every corner of the globe has been hit by inflation in recent months, but the situation facing Christine Lagarde, the E.C.B. president, is particularly tricky: balancing the weaknesses and debt burdens of 19 countries’ economies.

But policymakers must walk a fine line between easing price pressures and courting a recession. Prices started to rise strongly in Europe last year as the reopening from pandemic lockdowns caused imbalances in supply and demand. But inflation has jumped higher since Russia invaded Ukraine in February, disrupting the supply of essential commodities, including wheat, and pushing up oil and natural gas prices amid concerns about the security of Europe’s energy supply. The last time prices rose at this rate was before the creation of the euro — and the European Central Bank.

So far the E.C.B.’s response has been to go slow. More than 75 other central banks have increased interest rates so far this year — some, like the U.S. Federal Reserve, more than once. But Lagarde has been more focused on protecting southern European economies from rising borrowing costs than on curbing inflation.

There’s another source of uncertainty from Italy, where this morning Prime Minister Mario Draghi offered his resignation for a second time. Financial markets were reacting negatively to the imminent departure of Draghi, who preceded Lagarde at the E.C.B. He is credited with helping to save the euro, and, by the force of his credibility, had increased investor confidence in his country, writes The Times’s Jason Horowitz. But Italy, which has a national debt 150 percent the size of its G.D.P., will be among the European countries that face the largest challenges from higher interest rates.

Europeans are told to curb their natural gas use. The E.U.’s executive branch said member countries must cut consumption by 15 percent between now and next spring to stave off a major crisis, as Russia weaponizes its energy exports. The flow of Russian gas, which provides 40 percent of E.U. consumption, was less than one-third the normal average last month. Natural gas prices are also spiking in the U.S., as a result of the heat wave.

A bipartisan Senate group proposes legislation to prevent attempts to overturn elections. The measures aim to guarantee a peaceful transition from one president to the next, after the Jan. 6 attack on the Capitol exposed how the current law could be manipulated to disrupt the process.

China fines the ride-hailing company Didi $1.2 billion for data security violations. The firm violated several laws, the regulator said, by collecting millions of addresses, phone numbers, images of faces and other data. It was the latest in a string of regulatory actions that have laid low China’s once-soaring internet sector.

United returns to profitability for the first time since the start of the pandemic. But the airline, which reported its second-quarter results yesterday, warned that it is likely to cut flights so that it can run more smoothly. It also said that while demand for air travel remains high, it expects the economy to slow “in the near to medium term.”

A Twitter worker accused of spying for Saudi Arabia heads to trial. ​​Ahmad Abouammo is charged with acting as an agent of a foreign power inside the U.S., committing wire fraud and laundering money. The Justice Department says he misused his access to Twitter user data, gathering the personal information of political dissidents and passing it to Saudi Arabia in exchange for a luxury watch and hundreds of thousands of dollars.

Tesla slams the brakes on Bitcoin

Tesla, concerned about a cash squeeze because of supply-chain pressures stemming from its business in China, disclosed yesterday that it had sold about 75 percent of its Bitcoin by the end of June. In all, the electric vehicle company’s results for its second quarter, which it also disclosed yesterday, showed a notably bumpy few months.

Profit was $2.3 billion, compared with a record $3.3 billion in the first quarter, but up from $1.1 billion a year ago. Vehicle deliveries from April through June fell 18 percent from the first three months of the year, an unusual decline for a company that in recent years has posted solid gains from quarter to quarter. (The deliveries were up 26 percent from a year earlier.)

A big reason for the slowdown: China. “It’s kind of been supply chain hell,” Tesla’s chief executive, Elon Musk, said on the company’s earnings call. China accounts for about 40 percent of Tesla’s sales, and its Shanghai factory has been plagued by pandemic shutdowns and shortages of key parts and materials. What’s more, Tesla has not been able to increase production at new factories in Texas and near Berlin as it had planned.

Musk has been a big booster of Bitcoin on Twitter, but Tesla’s liquidity is now a greater concern. “We are concerned about the overall liquidity of the company given shutdowns in China,” said Musk, explaining the company’s Bitcoin exit. Tesla first bought Bitcoin early last year, but also has been moving away from the currency recently. In May 2021, Musk tweeted it would stop accepting Bitcoin as payment for cars, citing environmental reasons. Still, Tesla’s chief financial officer, Zach Kirkhorn, said at the time, “It is our intent to hold what we have long term.”

The Bitcoin losses raise more questions about Musk, whose legal fight over his $44 billion deal to buy Twitter has only served to underline his eccentricities. “While Musk’s impressive innovation has served the company well, his personal flair is starting to raise governance questions,” said Laura Hoy, an equity analyst at the investment firm Hargreaves Lansdown.

“There is an advantage to software that economists haven’t really reckoned with yet. Software isn’t accelerating creative destruction today. Software is suppressing it.”

— James Bessen, executive director of the Technology & Policy Research Initiative at the Boston University School of Law, whose new book, “The New Goliaths,” argues that the complex software that companies have built to speed their everyday functions has hurt competition and slowed actual innovation.

Some well-known investors are backers. Lendtable raised $18 million in its Series A round last year, led by 01 Advisors, which was started by the former Twitter executives Dick Costolo and Adam Bain. Participants included SoftBank’s SB Opportunity Fund, which was created to support minority founders after George Floyd’s murder, as well as Streamlined Ventures, Dragon Capital Group and Valor Equity Partners. Mitchell Jones, a co-founder, told DealBook that Lendtable stands out because it doesn’t require a credit check on borrowers and it doesn’t charge compound interest on loans.

But there are concerns that fees and taxes cut into potential for long-term growth. On top of Lendtable’s $10 monthly fee to borrowers, borrowers are required to pay income tax on any early withdrawals, which also bring a steep penalty from the I.R.S. for those under 59 and a half. Erin Lowry, a personal finance expert and the author of the “Broke Millennial” series, said it was difficult to see exactly what fees would be charged from the company’s Frequently Asked Questions section on its website.

“Anytime there’s a lack of transparency around fees, a warning sign goes off in my head,” she said.

Even with fees, borrowers are better off, Jones said, because that money would have been left on the table. Jones, 28, who started the firm with his fellow entrepreneur Sheridan Clayborne, 22, said he came up with the idea after watching how his parents were not saving for their retirements efficiently. He said he became fixated on finding ways to help low- and middle-income Americans invest for retirement. “We did this so that we only win if our customers win,” he said. “If we don’t help them earn money, we do not receive any fee for that.”