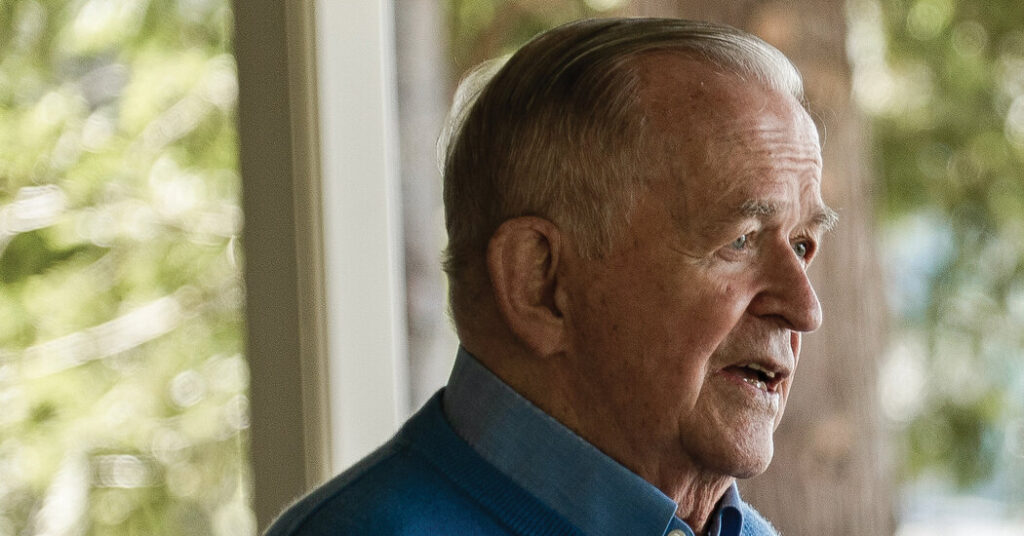 
Dee Hock, a banker with a junior college degree who shaped the Visa credit card into a global financial behemoth, died on July 16 at his home in Olympia, Wash. He was 93.

His son David confirmed the death.

The credit card business was in an early, rocky stage of development in 1966 when Mr. Hock was named to run the credit card department of National Bank of Commerce in Seattle, which was licensed by Bank of America to issue its BankAmericard.

At the time, the business was beset by bad debts and fraud, and the cards themselves were primitive: They lacked the magnetic stripes that would later encode customer information; transactions that required bank authorizations took a long time; and the embossed information on them — customer name, card number, expiration date — was awkwardly copied onto receipts with a heavy imprinter.

“By 1968, I was extremely concerned that the industry may go under and our bank’s investment with it,” Mr. Hock told Plazm, an arts and politics magazine based in Portland, Ore., in 2013. “I was attending a meeting of all of the licensees of BofA, which soon became a shambles of argument and accusations.”

He became the leader of a committee of bankers whose institutions licensed the BankAmericard, which was first issued in 1958. The panel’s mission: to determine the card’s future. (The American Express card made its debut that same year; eight years earlier, Diners Club had issued what is widely consider the first credit card.)

The committee’s solution was to create a new company, National BankAmericard, to be separate from Bank of America and to be controlled by the banks that issued the card. Mr. Hock was named president and chief executive. In 1976, after an in-house contest, the company was renamed Visa.

As chief executive, he oversaw the development of the first electronic authorization system and the first interbank electronic clearing and settlement system. Banks would issue the cards, not Visa, and they were mandated to add the magnetic stripe to their cards.

“Dee Hock realized something in the late 1960s that few others really understood: Computers and telecommunications would soon make it possible to build a global ‘electronic value exchange’ system that would soon enable customers to pay for goods and services ‘anywhere you want to be,’” David Stearns, the author of “Electronic Value Exchange: Origins of the VISA Electronic Payment System” (2011), wrote in an email. (The company renders its name in all capital letters.)

In a tribute, Alfred Kelly Jr., the chief executive of Visa, wrote that Mr. Hock had had a vision of “a world of frictionless commerce where anyone, anywhere could exchange value 24 hours a day, seven days a week, with absolute reliability.”

That vision, long since realized, has made Visa the world’s leading credit card network, with 3.9 billion cards issued and a total purchase volume of $13 trillion.

“What he did was undeniable: He made credit cards work,” Joe Nocera, a former New York Times columnist who wrote about Mr. Hock in his book “A Piece of the Action: How the Middle Class Joined the Money Class” (1994), said in a phone interview. “He took a system on the brink of collapse and said, ‘Follow me, I’ll take you to the promised land.’”

Dee Ward Hock ws born on March 21, 1929, in North Ogden, Utah. His father, Alma, was a utility lineman. His mother, Cecil (Dawson) Hock, was a homemaker.

As a boy, Dee became enamored of the biology and ecology around him in rural Utah, but he followed a banker’s career track after graduating in 1949 from the two-year Weber State College (now University) in Ogden.

Over the next 17 years, Mr. Hock was the manager of two branches of the bank Pacific Finance; an assistant manager of public relations and advertising for Pacific; general manager of the Columbia Investment Company; and a supervisor at CIT Financial (now Group). He was hired by National Bank of Commerce in 1966. But before joining it, he had “essentially retired on the job,” his son said in an interview.

“When people left him alone, he was usually the most successful part of the organization,” David Hock added. “But when they wanted to fix it, they usually messed it up.”

Energized by his work at Visa, Mr. Hock moved the company into offering fdebit cards, which gave cardholders access to checking accounts, as well as a premium card and a money-market fund.

“Mr. Hock is a magnificent strategist, maybe even brilliant,” Helene Duffy, a consultant in the field of electronic funds transfer, told The Times in 1981. “He has always been determined to have Visa be the premier payment system, and has not deviated from that basic goal.”

In addition to his son David, Mr. Hock is survived by a daughter, Lynette Elze; seven grandchildren; and seven great-grandchildren. His wife, Ferol (Cragun) Hock, died in 2018. Another son, Steven, died in 2012.

At Visa, Mr. Hock encouraged innovation and experimentation — among its employees and among the banks that licensed the credit card. Rather than running the company under a traditional hierarchical management system, he sought input from the bottom up.

It was an apt way of managing a business whose member banks compete against one another for customers but at the same time must cooperate to make Visa work effectively. But, he conceded to Fast Company magazine in 1996, Visa implemented only about 25 percent of what he called his “chaordic” concept of management — a balance of chaos and order.

That concept, as he explained it, applies to organizations and businesses where power is widely distributed. He wrote two books about it, “Birth of the Chaordic Age” (1999) and “One From Many: VISA and the Rise of Chaordic Organization” (1999).

Mr. Hock resigned from Visa in 1984 to become a rancher, but eight years later he began consulting organizations about his chaordic ideas.

In “One From Many,” he recalled speaking to groups and asking them what they thought was the most important responsibility of a manager.

All the answers, he wrote, were “downward looking — having to do with exercise of authority, with selecting employees, motivating them, training them, appraising them, organizing them, directing them and controlling them.”

He added: “That perception is completely mistaken. In chaordic organizations, it must be stood on its head, as it should in all organizations.”