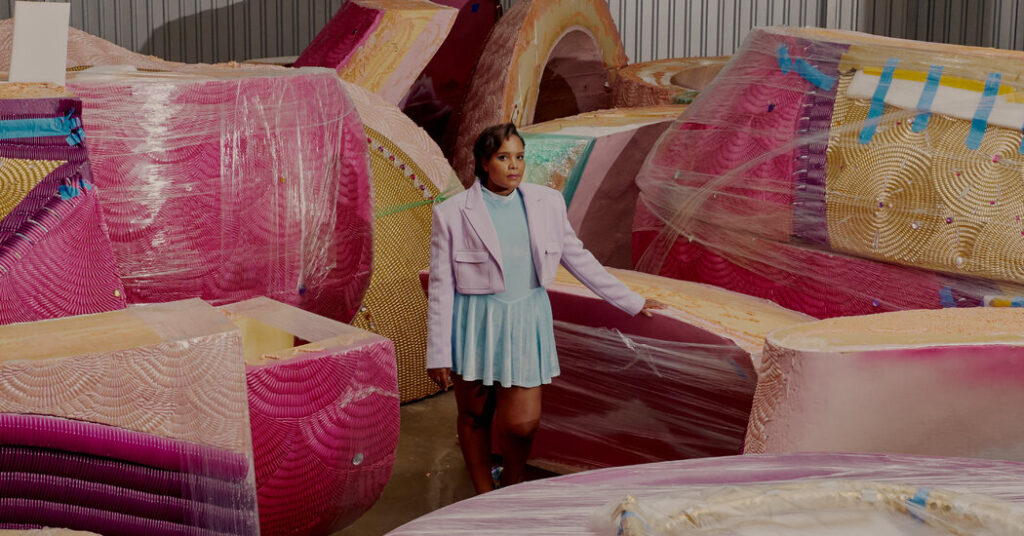 Does Public Art Have an Afterlife?


Pamela Council set a deadline and said a prayer. It had been nearly seven months since the artist’s monument to survivors of the pandemic first appeared in Times Square, with its carapace of 400,000 hand-painted acrylic nails enshrining a bubbling fountain where visitors could reflect on persevering through Covid-19.

But when the artist’s commissioned exhibition with Times Square Arts ended in December, and the 18-foot-tall grotto was moved into a Brooklyn storage facility, Council was shocked to get a bill for $5,000 in monthly fees and insurance, an expense that would quickly drain the artist’s bank account. Times Square Arts would pay for the first five months of storage, but it was up to Council, the organization said, to foot the continuing bill, or choose to dismantle the work.

Without gallery representation, the artist decided crowdfunding was the best chance of saving “A Fountain for Survivors,” buying time to raise $26,000 to pay for storing the 20,000-pound sculpture until a permanent home could be found.

“There is a history of queer and Black artists making work and having it destroyed,” Council, who identifies as Black and nonbinary, said in an interview. “I would hate to see my work have that fate.”

A public art commission, dozens of which are awarded annually, represents one of the highest honors that an artist can receive in a city like New York, where space on the sidewalk is limited, materials are expensive and competition for a commission is fierce. The city’s most prestigious commissions are distributed by nonprofits, which typically award established artists, who have galleries willing to shoulder production costs and ensure a fruitful afterlife for the sculptures. But many go to emerging artists with no gallery representation, who lack the resources to ensure that every monument and sculpture has an afterlife, which can leave them scrambling to save their own work — or, in the case of Zaq Landsberg, choosing to destroy it.

In 2019, he took a shovel and unearthed the anchors keeping his exhibition, “Islands of the Unisphere,” affixed to the lawns of Flushing Meadows Corona Park. The show included a series of table-size sculptures modeled after the park’s famous globe. His sculptures — outlines of Japan, Cuba and Madagascar — had been used as makeshift benches and tables by visitors. The Parks Department had commissioned them as part of its public art program, providing New Yorkers with cultural encounters throughout the city.

“Most of the islands ended up in the dumpster,” Landsberg said, adding that he had turned Cuba into a plant stand inside his apartment. “I try to be Zen about it, but honestly, it hurts every time I have to destroy something.”

Now, the artist saves whatever he can. Landsberg is currently stashing a tomb effigy he created last year in honor of the Revolutionary War hero Margaret Corbin inside his Brooklyn studio, to save money on storage. The sarcophagus, commissioned by the Parks Department, had been displayed in Fort Tryon Park for nearly a year until June, but now its final resting place may be underneath the artist’s work table.

In May, he started a Kickstarter campaign to subsidize the relocation of another work, “Reclining Liberty,” which imagines Lady Liberty stepping off her pedestal in New York Harbor and taking a nap. The artwork had survived a year of visitors climbing on its copper-painted patina in Morningside Park in Harlem, but now it needed to hitch a ride across the Hudson River to Liberty State Park in Jersey City, where Landsberg had arranged another yearlong exhibition. The hourlong drive required $11,000 to cover the costs of a rigging company, two boom trucks and maintenance work on the sculpture once it arrived at its new location.

“Artists are responsible for the artwork before and after display,” Megan Moriarty, a spokeswoman for the Parks Department, said in a statement, adding that “our staff work closely with artists and can provide recommendations for other organizations, locations and agencies that they might work with beyond the exhibition term.”

For example, Diana Al-Hadid was able to arrange a tour of her 2018 Madison Square Park Conservancy exhibition, called “Delirious Matter.” With help from the conservancy and her dealer, Kasmin Gallery, the sculpture traveled to Williamstown, Mass., and on to Nashville for the next two years. “Immediately it had a life, and it’s at that point when it’s possible for the artist to sell the work later,” Al-Hadid pointed out in an interview.

Kara Walker enjoyed a similar arrangement for her 2014 exhibition with Creative Time: “A Subtlety.” That work focused on an enormous sugar sphinx looming over the interiors of the old Domino Sugar Factory in Brooklyn. When the show ended, Sikkema Jenkins & Co., the artist’s gallery, arranged for a film crew to document the deinstallation. The dealer also helped store the sphinx’s left hand, which was later exhibited in 2019 by the Deste Foundation on the island of Hydra in Greece.

But even with a gallery in the artist’s corner, engaging with the public art system can become prohibitively expensive. In 2020, Sam Moyer created sculptures for the Public Art Fund that honored the nonprofit’s founder, Doris C. Freedman. The artist embedded slabs of imported marble into concrete to create monumental doors, just slightly ajar so that viewers could walk through them. She estimated that she and her gallerist, Sean Kelly, paid nearly $200,000 to produce “Doors for Doris,” while the Public Art Fund provided a $10,000 artist fee.

“When a new work may have a life after the exhibition, the artist’s gallery will often contribute to direct fabrication costs, which would otherwise need to be reimbursed to P.A.F. in the event of a sale,” said Allegra Thoresen, a Public Art Fund spokeswoman.

Moyer had arranged for the sculpture to travel to Philadelphia for another exhibition, but the agreement fell through during the de-installation in New York, leaving her with 90,000 pounds of sculpture spread across six flatbed trucks.

“It was a nightmare scenario,” Moyer said. “Without gallery representation, it would have resulted in me having to destroy the piece.”

Instead, she and her dealer made an agreement with the shipping company to store the sculptures at its facilities in the Bronx until another cultural institution agreed to acquire them. They remain there.

“The logistics of public art are absolute bananas,” Moyer added. “It was harrowing to face that time crunch.”

The Public Art Fund’s director, Nicholas Baume, said that his organization tries to help. “A lot of the public art projects that we do are site-specific, and they are conceived for a particular time and place,” he said. “Often they can have a further life and be relocated, but sometimes they are not intended to be permanent.”

But many of the sculptors who have gone through the trials of creating public art find it difficult to opine on what might have been. If Council had understood the challenges involved in storing “A Fountain for Survivors,” the artist might have adopted a more reserved style.

“I would have probably designed something that was low maintenance, one color, one material, bronze and boring,” Council said.

“I had just expected it all to be easier,” Council added.

But, the artist said, Times Square Arts continued to provide support; the group paid nearly $20,000 for the first five months that the fountain had been in storage and is helping to search for the project’s next home.

Jean Cooney, the nonprofit’s director, acknowledged the asymmetries of producing public art, saying it was a reflection of the economically lopsided nature of the art world. “The system is poised to breed inequality,” she said, “so we need to keep working with emerging artists and building partnerships with organizations that have the resources to handle the things we don’t.”