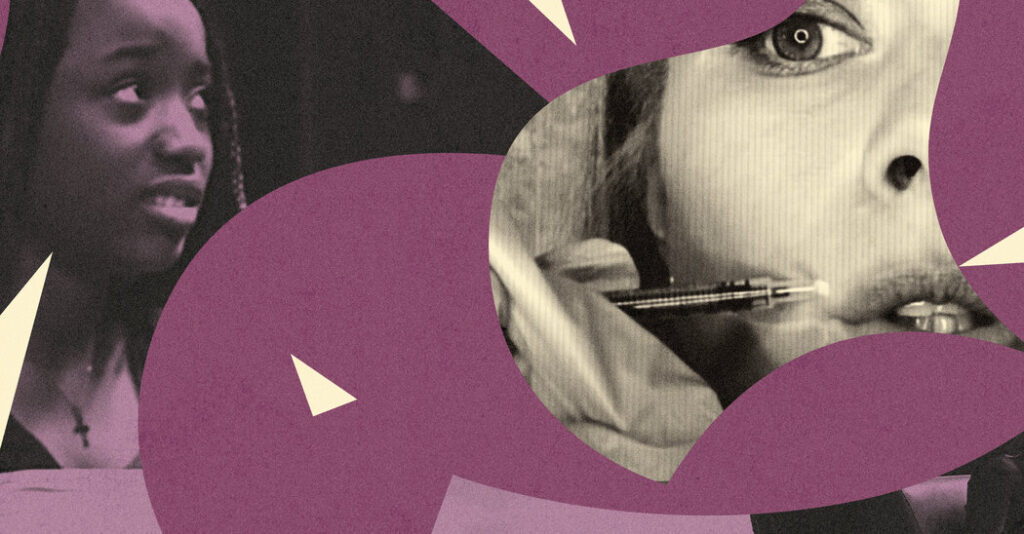 
Last week, I sat down with my 10-year-old daughter to watch a short video titled “Toxic Influence” — a product of the Dove Self-Esteem Project. We watched as five sets of moms and their daughters appeared in turn on upholstered chairs before a big screen, glasses of water trembling between the generations. Text appeared: “We invited parents and their girls to talk about social media.”

In the video, one mom says she thinks social media can be good or bad, while another says it can be confidence-building; one girl says she thinks it has had a mostly positive impact on her life. The girls are then told to start scrolling on their phones. Images appear on the big screen, quick clips of TikTok-ish influencers touting weird beauty hacks. “Most parents underestimate how harmful toxic beauty advice can be on social media,” the text says. Then, out of left field: “Using face-mapping technology, we put highly toxic advice into the mouths of their moms.” Now the five mothers appear on the movie screen, digitally morphed into the people doling out grotesque recommendations: how you are never too young for “baby Botox”; how at-home lip-injection kits are so amazing; how there are powders you can ingest to skip meals; how to straighten your teeth with a nail file. “Skinny,” the last toxic influencer/deepfake mom tells us, “is never finished.”

“You wouldn’t say that to your daughter,” the text announces. “But she still hears it online, every day.” The mothers are shocked, the daughters contrite. We are informed that the Dove Self-Esteem Project has created tools parents can use to “help their girls detoxify their feeds.” (At this point my daughter, whose main online-media usage is still arts-and-crafts videos on YouTube, looked at me skeptically.) The ad invites viewers to a page on Dove’s website, which warns me that “1 in 2 girls say toxic beauty advice on social media causes low self-esteem” and offers resources including something called a Confidence Kit. There is also a branded podcast, through which I will be told that one problem with toxic influencers is that their posts are often sponsored, and thus advertising. A nesting doll of paranoia starts to emerge: One branded entity is now whispering to me about how other branded entities are whispering to my children.

Like many behemoth brands, Dove used to be a single product with advertising centered on what that product did. For most of my youth, Dove was a “beauty bar” whose key claim was that it was “one quarter moisturizing cream” and thus would dry your skin less than soap. Early in this century, though, its manufacturer, Unilever, transformed it into a personal-care “masterbrand” including lotions, hair sprays and other products. To advertise the newly diversified Dove, a single message was sought. In 2004 the Campaign for Real Beauty was unveiled.

It would become one of the most successful campaigns in the history of advertising. With its use of “real women” with “real curves” — its first famous ads featured a multicultural gaggle laughing in white underwear — it felt so groundbreaking it got its own “Oprah” episode. (Enough so to overlook the fact that those early ads were for a line of firming products.) Dove’s sales skyrocketed, and its ads continued to build a fantasy world of aspirational “realness,” a you-go-girl pink-ribboning of any fleshy norm that bred insecurity, from fat stigma to racism to ageism. Through all this, Unilever continued to produce the diet powder Slim-Fast (until selling the brand in 2014), the skin-lightening line Fair & Lovely (now Glow & Lovely, and no longer marketed as lightening), various “anti-aging” products and, of course, Axe men’s body spray, whose advertising could be so demeaning to women that it’s barely watchable today.

You can no longer flimflam an aura of general righteousness.

Hypocrisy is not new in advertising, but taking a do-gooder line has certainly seen easier times. I don’t know how Coca-Cola’s “I’d Like to Buy the World a Coke” ad would go over today, but in 2017, when Pepsi tried what we would now call a “wokewashed” variation — Kendall Jenner joining a protest march and giving a cop a soda — it was an unmitigated fiasco, and the ad was pulled immediately. You can no longer flimflam an aura of general righteousness. Take a stance, and you’re expected to stand for it always, in the right way, under unprecedented scrutiny.

Dove would experience a barrage of backlash. One body-wash commercial faced boycott threats over a sequence in which a Black woman appeared to turn into a white woman (who then turned into a brown-skinned woman; the ad was quickly pulled). A video called “Real Beauty Sketches,” in which a forensic artist drew what women told him they looked like, was criticized as patronizing. When the brand introduced limited-edition body-wash bottles in the shapes of different body types (Slim! Round! Pear! Bigger pear!), it caused some to wonder whether Dove had lost its touch; who wanted to stand in the supermarket deciding if they were a pear or a bigger pear? Younger consumers have shown that they like to see their brands politically engaged, but that same impulse leaves them vigilant about blind spots and tonal missteps. In the years since Real Beauty, Dove has been criticized for not featuring enough “women who are naturally thin” and for being obsessed with beauty, period.

Thus does “Toxic Influence” feel like the work of a brand beating a retreat from the politicized world of body positivity. Dove has found a way to align itself with virtue and outrage while keeping its own beauty tips unspoken. Nobody is on the side of nightmare YouTubers telling teenagers to file down their teeth; to attack such people is shooting fish in a barrel. But as marketing, it’s almost genius: adopting a righteous tone while remaining as broadly inoffensive as any megabrand desires.

One downside — for, say, a working solo mother of two girls, like me — is that now we have a corporation that sells volumizing hair care and “pro-age” creams exhorting us to fix not just our bodies or ourselves but also TikTok and Instagram, or at least our children’s relationships with them.

Yesterday I picked up my 10-year-old’s old turquoise iPod Touch to see what was on it. I found a few selfies she took — as unsmiling as Morticia Addams, as the kids like it these days. I also found some chatty videos she made of herself painting seashells, copying the style of her favorite arts-and-crafts YouTuber. Every so often, she would bat her tangled hair back with splayed hands, the way people with long nails do. My daughter does not have long nails. Her favorite YouTuber does. The amount of ingested culture in this tiny gesture stopped me short. This was nothing a feed “detoxed” of teeth-filers would address. It was bigger: everything she sees, all the time, everywhere, an open fire hydrant of messages — including, no matter how much they would prefer to seem above it, Dove’s.

PrevPreviousDana Canedy, Publisher of Simon & Schuster’s Flagship Imprint, Has Left the Job
NextFighting a Brutal Regime With the Help of a Video GameNext