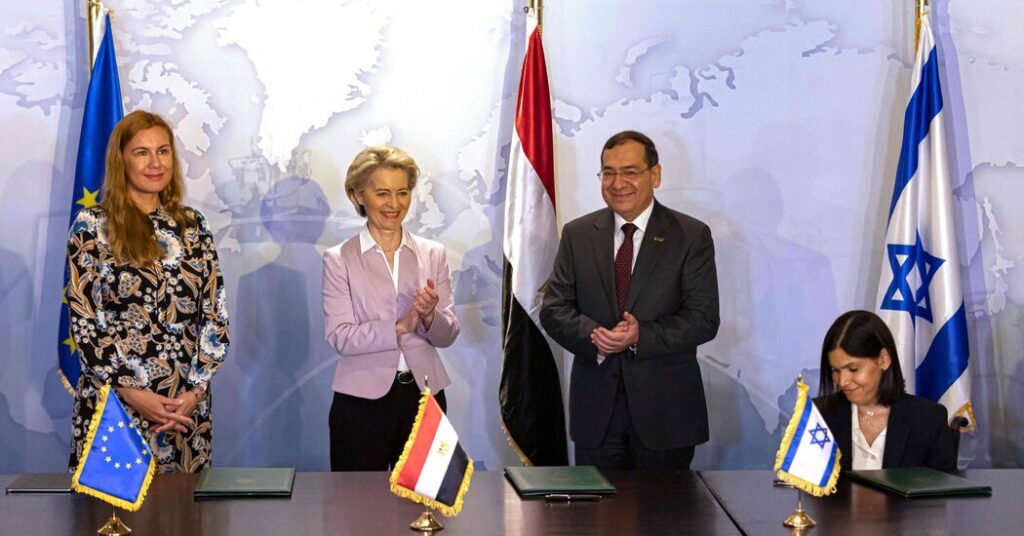 E.U. Looks to Tap Gas From Egypt and Israel


An agreement reached by the European Union, Israel and Egypt in Cairo on Wednesday could pave the way for more natural gas exports from these countries to reach Europe.

The memorandum of understanding calls for Brussels and the two Middle Eastern countries to work for “a stable delivery” of gas to the European Union. It also encourages European companies to invest in the exploration and development of the fuel in Israel and Egypt.

While the agreement is not legally binding, it could prove an important step in realizing the long-discussed potential of the eastern Mediterranean as an important energy supplier for industrialized Europe.

The European Commission’s president, Ursula von der Leyen, visited Israel on Tuesday and Egypt on Wednesday, with natural gas on her agenda.

“We are starting to tap into the full potential of E.U.-Egypt relations,” Ms. von der Leyen said on Wednesday.

Since Russia’s push into Ukraine, Ms. von der Leyen has led a scramble by the bloc to reduce its dependence on Russian fuel and to find sources to replace it. That quest has been given added urgency after Gazprom, the Russian state-controlled gas company, recently cut off supplies to Poland and Bulgaria and reduced flows to Germany.

Israel and Egypt fill the bill. They are conveniently situated on the fringes of Europe, and oil companies have made large discoveries of natural gas off the shores of both countries in recent years.

Washington has long tried to encourage cooperation on gas in the region, figuring that energy ties would help cement peace between former enemies like Egypt and Israel. The European Union could bolster this effort.

From the perspective of major energy companies, the region has slowly been shifting from a geopolitically hazardous zone to a promising source of natural gas. Betting that this momentum would continue, Chevron, the American oil company, in 2020 bought Noble Energy, an American company that had discovered most of the Israeli gas, for about $4 billion.

Gas has also been discovered off Cyprus, and other countries in the area, including Lebanon and Syria, may also have commercial quantities of the fuel.

An initial increase in exports would probably come through two liquefied natural gas facilities on Egypt’s Mediterranean coast. Gas from Israel could be funneled into these chilling plants or used to provide Egypt, already a substantial exporter, with fuel for domestic use to free up more gas for transport on ships.

Pipelines to Europe have also long been under consideration, although potentially high costs and geopolitical tensions have so far worked against building them.

The agreement mentions formulating a plan for making efficient use of infrastructure for shipping gas to the European Union. It also notes that Egypt aspires to serve as a “regional hub” for exporting and trading in natural gas.