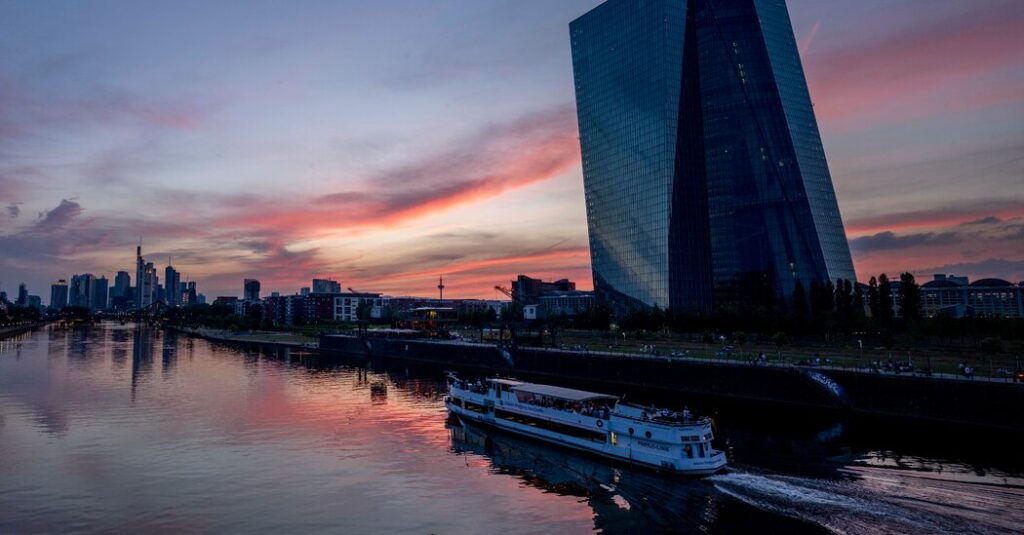 ECB Prepares for First Interest Rate Increase in a Decade


The European Central Bank will enter a new era on Thursday, as policymakers are set to confirm just how soon its bond-buying program will end and reaffirm plans to raise interest rates over the summer for the first time in more than a decade.

Across the eurozone, inflation has outpaced economists’ expectations: The annual rate of price increases climbed to 8.1 percent in May, the highest since the creation of the euro currency in 1999. Policymakers have been spurred into faster action against inflationary forces that are being stoked by the war in Ukraine.

The central bank will also provide updated forecasts for the economy on Thursday, which are likely to paint a grim picture of rising inflation and a deteriorating growth outlook. Last month, the European Commission lowered its economic growth forecasts to 2.7 percent for this year, from the 4 percent estimated in winter, and said inflation would average 6.8 percent for the year.

But the need to tackle inflation is outweighing concerns about a slowing economy.

For much of the past decade, policymakers have been battling against inflation that was too low. But as consumer prices began climbing and spreading to more goods and services in late 2021, the bank has ramped up its process of so-called policy normalization, including the possibility of raising its negative interest rate. The inflation forecast for 2024 will be a crucial sign of whether medium-term inflation is expected to be at or above the bank’s 2 percent target, further cementing the conditions for monetary tightening.

In late May, Christine Lagarde, the president of the bank, laid out in unusually clear terms the expected path for interest rate increases, signaling increases in July and September. “Based on the current outlook, we are likely to be in a position to exit negative interest rates by the end of the third quarter,” Ms. Lagarde wrote in a blog post. The bank’s more hawkish tone has also helped lift the euro away from a five-year low against the dollar in the past few weeks. Ms. Lagarde will lead a news conference in Amsterdam on Thursday afternoon.

At the moment, the central bank’s deposit rate, which is what banks receive for depositing money with the central bank overnight, is at minus 0.5 percent, in effect a penalty meant to encourage banks to lend the money rather than keep it at the central bank. The rate was first cut below zero in mid-2014 as the inflation rate fell toward zero.

Traders will be listening carefully for clues about the size of potential rate increases. Financial markets are currently betting on the deposit rate to climb by more than 130 basis points, or 1.3 percentage points, by the end of the year.

The central bank’s chief economist recently said increases were likely to be a quarter of a percentage point at a time, but some policymakers have suggested that a larger-than-normal increase, of half a percentage point, might be warranted.

Analysts at Bank of America expect the central bank to raise interest rates by 1.5 percentage points this year. “The pressure to move faster (and less gradually) will continue to grow from here,” they wrote in a note to clients.

As a precursor to raising rates, the bank’s bond-buying program, a way of keeping borrowing costs down and injecting money into the system, is set to end in early July, policymakers have signaled. (A special pandemic-era bond-buying program ended in March after 1.7 trillion euros in purchases.) This month, the bank is set to buy €20 billion in mostly government bonds. The program started in 2015, and its purchases have grown and shrunk as policymakers tried to heat up and cool down the economy as necessary. As of May, holdings in the program amounted to more than €3 trillion in bonds.

But even as the bank stops growing its asset purchase programs, officials will be carefully watching the borrowing costs of countries with high debt burdens as interest rates rise. The aim is to ensure their debt yields don’t diverge too much from other countries in the bloc, such as Germany. This year, the spread between Spain’s 10-year government bond yield and Germany’s has grown to 113 basis points from 70 basis points.

The reinvestment of proceeds from maturing bonds could be used to avoid this so-called fragmentation. The central bank has already stressed that there is flexibility in its asset purchase programs, but investors are waiting to see if the bank will provide more details on how it might respond to diverging borrowing costs.