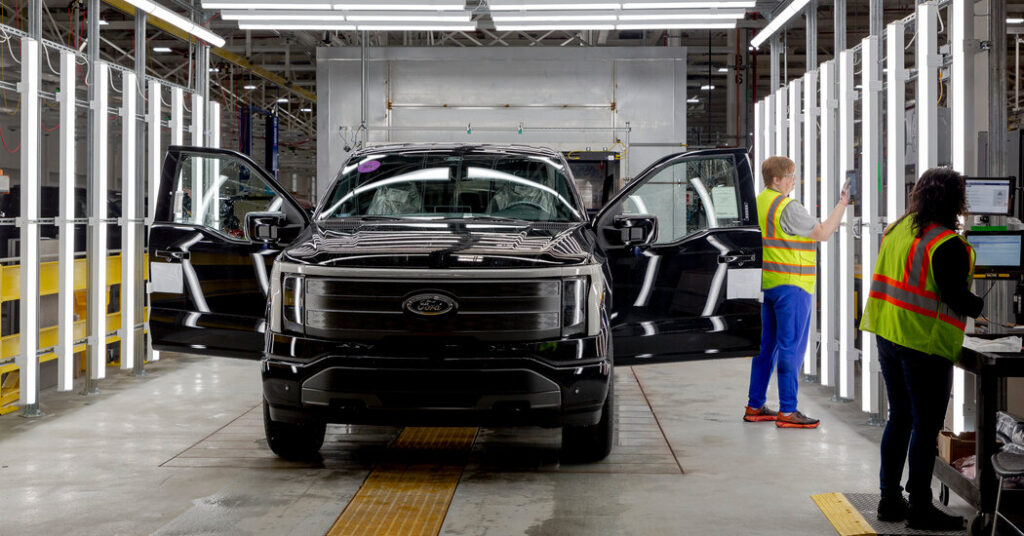 Electric Cars Are Too Costly for Many, Even With Aid in Climate Bill


Policymakers in Washington are promoting electric vehicles as a solution to climate change. But an uncomfortable truth remains: Battery-powered cars are much too expensive for a vast majority of Americans.

Congress has begun trying to address that problem. The climate and energy package passed on Sunday by the Senate, the Inflation Reduction Act, would give buyers of used electric cars a tax credit.

But automakers have complained that the credit would apply to only a narrow slice of vehicles, at least initially, largely because of domestic sourcing requirements. And experts say broader steps are needed to make electric cars more affordable and to get enough of them on the road to put a serious dent in greenhouse gas emissions.

High prices are caused by shortages of batteries, of raw materials like lithium, and of components like semiconductors. Strong demand for electric vehicles from affluent buyers means that carmakers have little incentive to sell cheaper models. For low- and middle-income people who don’t have their own garages or driveways, another obstacle is the lack of enough public facilities to recharge.

The bottlenecks will take years to unclog. Carmakers and suppliers of batteries and chips must build and equip new factories. Commodity suppliers have to open new mines and build refineries. Charging companies are struggling to install new stations fast enough. In the meantime, electric vehicles remain largely the province of the rich.

To some extent, the carmakers are following their usual game plan. They have always introduced new technology at a luxury price. With time, the new features and gadgets make their way into cheaper cars.

But emission-free technology has an urgency that voice navigation or massaging seats did not. Transportation accounts for 27 percent of greenhouse gas emissions in the United States, according to the Environmental Protection Agency. Battery-powered cars produce far less carbon dioxide than vehicles that run on gasoline or diesel. That’s true even accounting for the emissions from generating electricity and from manufacturing batteries, according to numerous studies.

Only a few years ago analysts were predicting that electric vehicles would soon be as cheap to buy as gasoline cars. Factoring in the savings on fuel and maintenance, going electric would be a no-brainer.

Instead, soaring prices of commodities like lithium, an essential ingredient in batteries, helped raise the average sticker price of an electric vehicle by 14 percent last year to $66,000, $20,000 more than the average for all new cars, according to Kelley Blue Book.

Demand for electric vehicles is so strong that models like the Ford Mach-E are effectively sold out, and there are long wait times for others. Tesla’s website informs buyers that they can’t expect delivery of a Model Y, with a purchase price of $66,000, until sometime between January and April 2023.

Energy industry. The bill would provide billions of dollars in rebates for Americans who buy energy efficient and electric appliances as well as tax credits for companies that build new sources of emissions-free electricity, such as wind turbines and solar panels. The package also sets aside $60 billion to encourage clean energy manufacturing in the United States. The bill also requires businesses to pay a financial penalty per metric ton for methane emissions that exceed federal limits starting in 2024.

With so much demand, carmakers have little reason to target budget-minded buyers. Economy car stalwarts like Toyota and Honda are not yet selling significant numbers of all-electric models in the United States. Scarcity has been good for Ford, Mercedes and other carmakers that are selling fewer cars than before the pandemic but recording fat profits.

Automakers are “not giving any more discounts because demand is higher than the supply,” said Axel Schmidt, a senior managing director at Accenture who oversees the consulting firm’s automotive division. “The general trend currently is no one is interested in low prices.”

Advertised prices for electric vehicles tend to start at around $40,000, not including a federal tax credit of $7,500. Good luck finding an electric car at that semi-affordable price.

Ford has stopped taking orders for Lightning electric pickups, with an advertised starting price of about $40,000, because it can’t make them fast enough. Hyundai advertises that its electric Ioniq 5 starts at about $40,000. But the cheapest models available from dealers in the New York area, based on a search of the company’s website, were around $49,000 before taxes.

Tesla’s Model 3, which the company began producing in 2017, was supposed to be an electric car for average folks, with a base price of $35,000. But Tesla has since raised the price for the cheapest version to $47,000.

Even used electric cars are scarce. Popular models like the Tesla Y and Ford Mach-E are sometimes selling for thousands of dollars more used than they did new. Buyers are willing to pay a premium to get an electric car, even a used one, right away.

Joshua Berliner, a Los Angeles entrepreneur, was in the market for a used Tesla Model 3 sedan but discovered that prices were higher than for a new Tesla. “The same held true for nearly every make we looked at,” Mr. Berliner said in an email.

Mr. Berliner, who owns a Tesla and wanted a second one for his wife, said he became so desperate that he almost bought a gasoline car. “I normally wouldn’t consider combustion vehicles, but if gas prices were lower I might have pulled the trigger,” he said.

The Inflation Reduction Act, which appears likely to pass the House, would give buyers of used cars a tax credit of up to $4,000. The used car market is twice the size of the new-car market and is where most people get their rides.

But the tax credit for used cars would apply only to those sold for $25,000 or less. Less than 20 percent of used electric vehicles fit that category, said Scott Case, chief executive of Recurrent, a research firm focused on the used vehicle market.

The supply of secondhand vehicles will grow over time, Mr. Case said. He noted that the Tesla Model 3, which has sold more than any other electric car, became widely available only in 2018. New-car buyers typically keep their vehicles for three or four years before trading them in.

The problem is that many new electric cars may not qualify for the $7,500 credits. The Inflation Reduction Act sets standards for how much of a car’s battery must be made in North America with raw materials from trade allies. Several car manufacturers and suppliers have announced plans to build battery factories in the United States, but few have begun producing.

“Right now with our lack of capacity for materials, I don’t think there is any product that will meet that today,” Carla Bailo, president of the Center for Automotive Research in Ann Arbor, Mich., said of the standards. “Tesla is probably close but the rest of the manufacturers, no way.”

The legislation also excludes imported electric vehicles from the tax credit. The provision is designed to protect American jobs, but will undercut the price advantage of Chinese brands that are expected to enter the United States. SAIC’s MG unit sells an electric S.U.V. in Europe for about $31,000 before incentives.

New battery designs offer hope for cheaper electric cars, but will take years to appear in lower-priced models. Predictably, next-generation batteries that charge faster and go further are likely to appear first in luxury cars, like those from Porsche and Mercedes-Benz.

Companies working on these advanced technologies argue that they will ultimately reduce costs for everyone by packing more energy into smaller packages. A smaller battery saves weight and cuts the cost of cooling systems, brakes and other components because they can be designed for a lighter car.

“You can actually decrease everything else,” said Justin Mirro, chief executive of Kensington Capital Acquisition Corporation, which helped battery maker QuantumScape go public and is preparing a stock market listing for the fledgling battery maker Amprius Technologies. “It just has this multiplier effect.”

The U.S. Department of Energy is trying to encourage start-ups to focus more on batteries for the masses. In May the department offered $45 million in grants to firms or researchers working on batteries that, among other things, would last longer, to create a bigger supply of used vehicles.

“We also need cheaper batteries, and batteries that charge faster and work better in the winter,” said Halle Cheeseman, a program director who focuses on batteries at the Advanced Research Projects Agency-Energy, part of the Department of Energy.

Gene Berdichevsky, chief executive of Sila Nanotechnologies, a California company working on next-generation battery technology, argues that prices are following a curve like the one solar cells did. Prices for solar panels ticked up when demand began to take off, but soon resumed a steady decline.

The first car to use Sila’s technology will be a Mercedes luxury S.U.V. But Mr. Berdichevsky said: “I’m not in this to make toys for the rich. I’m here to make all cars go electric.”

A few manufacturers offer cars aimed at the less wealthy. A Chevrolet Bolt, a utilitarian hatchback, lists for $25,600 before incentives. Volkswagen said this month that the entry-level version of its 2023 ID.4 electric sport utility vehicle, which the German carmaker has begun manufacturing at its factory in Chattanooga, will start at $37,500, or around $30,000 if it qualifies for the federal tax credit.

Then there is the Wuling Hongguang Mini EV, produced in China by a joint venture of General Motors and the Chinese automakers SAIC and Wuling. The car reportedly outsells the Tesla Model 3 in China. While the $4,500 price tag is unbeatable, it is unlikely many Americans would buy a car with a top speed of barely 60 miles per hour and a range slightly over 100 miles. There is no sign that the car will be exported to the United States.

Eventually, Ms. Bailo of the Center for Automotive Research said, carmakers will run out of well-heeled buyers and aim at the other 95 percent.

“They listen to their customers,” she said. “Eventually that demand from high-income earners is going to abate.”