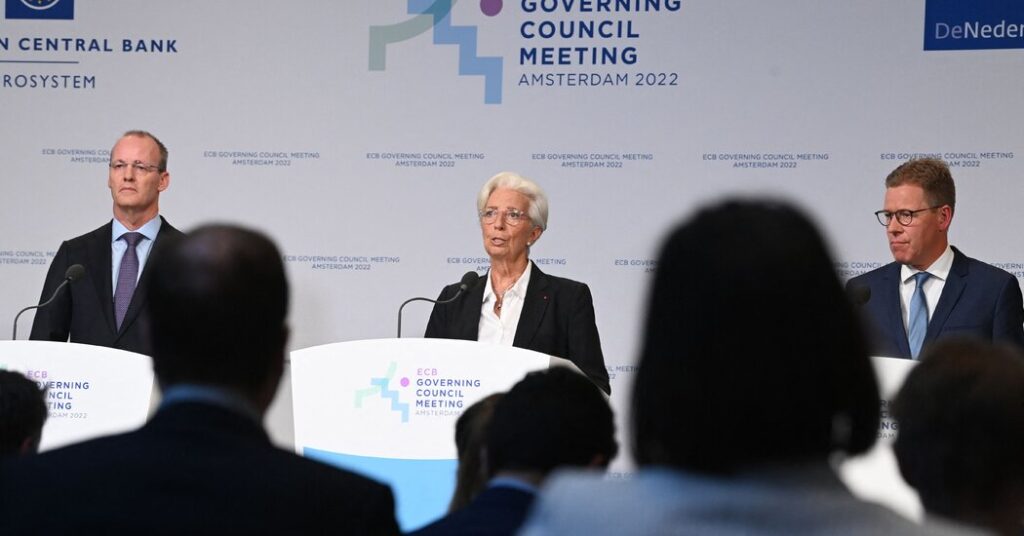 
The European Central Bank said Wednesday that it will take new steps to ward against spiraling borrowing costs in some highly indebted European countries. The announcement came after an unexpected meeting of the bank’s Governing Council amid growing concerns about the bond market.

The borrowing costs of eurozone countries have diverged sharply in recent weeks in the anticipation of the bank raising interest rates. This widening gap, known as fragmentation, could impair the ability of the bank to manage monetary policy across the 19 countries that use the euro. Christine Lagarde, the bank’s president, said last week that policymakers would “not tolerate” it.

On Tuesday, Isabel Schnabel, a member of the bank’s executive board, described fragmentation as “a sudden break” in the relationship between government borrowing costs and economic fundamentals.

Last week the bank said that it might consider using the reinvestment of proceeds from maturing bonds in its 1.85 trillion euro ($1.9 trillion) pandemic-era bond-buying program to avoid this fragmentation, by buying bonds that would help bring down governments’ borrowing costs.

On Wednesday, the bank confirmed it would make these bond purchases flexibly as well as “accelerate” the design of a new tool to combat market fragmentation, without providing more details.

The divergent spreads have emerged as the central bank shifted its policy to tackle inflation, which at an annual rate of 8.1 percent is the highest level since the creation of the euro currency in 1999. In addition to ending bond-buying programs that have scooped up vast quantities of government debt, the bank has also said it will raise interest rates in July for the first time in more than a decade. The move will be followed by another, probably larger, rate increase in September.

As traders bet how high the central bank will raise interest rates to rein in inflation, there have been growing concerns about the impact of higher rates on countries that have a lot of debt. Italy, which has the eurozone’s second-highest ratio of government debt to G.D.P., has seen yields on its 10-year bonds climb above 4 percent this week, for the first time since 2014. The gap between its yield and that of Germany’s, considered the region’s benchmark, has grown to the widest since early 2020, when the pandemic roiled bond markets.

“The pandemic has left lasting vulnerabilities in the euro area economy which are indeed contributing to the uneven transmission of the normalization of our monetary policy across jurisdictions,” the bank said in a statement on Wednesday.

The announcement brought bond yields down across the eurozone. Italy’s 10-year yield fell to 3.71 percent, from 4.17 percent the previous day. Its gap, or spread, with Germany’s yield also narrowed.

The European Central Bank faces a particular challenge as it determines monetary policy across a range of economies. On the one hand it is tightening monetary policy in the face of “undesirably” high inflation, but on the other hand it is trying to ease financing conditions for some of countries through bond purchases.

“It will take a few days to see how markets digest this, not to mention more details from the E.C.B.,” Claus Vistesen, an economist at Pantheon Macroeconomics, wrote in a note to clients. “The presence of an anti-fragmentation tool means that the E.C.B. has more room to raise rates without spreads widening excessively.”