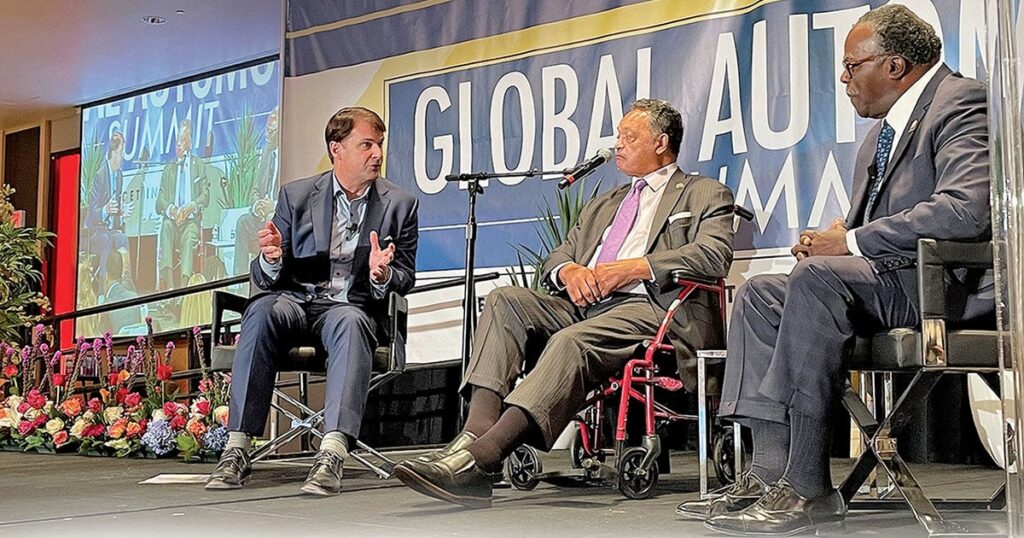 
Graves spoke with Staff Reporter Vince Bond Jr. about the industry’s transition to EVs and the progress automakers are making to diversify. Here are edited excerpts.

Q: How does it feel to see companies that are weaker in some areas of the scorecard making a real effort to improve?

A: I think it all has to do with Rev. Jackson’s moral authority. We could not do this scorecard without him. They’ve all responded. It’s been a great collaboration. In the beginning, we’d send out these surveys — some would respond to the surveys, some wouldn’t, but now they take the survey seriously. Under confidentiality, we’re able to capture the information, so it’s really been absolutely a great relationship with the OEMs.

In the next couple years, do you hope to add some of the new EV companies, such as Lucid and Rivian?

That’s the goal. Because as this industry grows, they will become players on different levels, and they’ve got to be held accountable when they start selling vehicles to consumers that look like us. So that is certainly the goal, to have everyone included, and eventually have Tesla included. The fact that Tesla has what, 67 percent of the [electric] market? The other OEMs have to really get busy to catch them.

The coalition has really been focused on EVs at its summit the last couple of years. Why is it important to stay on that theme?

You have the federal government stating that their goal is zero emissions. Europe just made a statement about 2035, where you cannot buy a vehicle that has a combustion engine.

This is not going away, and this is what the industry is going to become. The reason we have stayed engaged is because these windows close in terms of opportunity. A lot of the minority and African American suppliers have got to change now.

Because if they don’t make the changes now, then pretty soon they’ll be left out of the EV space. The semiconductor supply chain has really slowed the EV industry, but after that is corrected, it’s going to be like gangbusters.

[Piston Group CEO] Vinnie Johnson, he’s doing battery packs. You’ve got to get in it. That’s why we’ll have some aspects of this even next year. Until we can begin to see the increases of minority suppliers in the space because right now, you can almost count the companies on one hand that are players in the EV space that are suppliers of color.

I don’t think it’s the OEM saying no, but I just think we’ve got to run faster as companies. We’ve got to make the decision and the commitment to get involved. That’s why we’re still beating the same drum.

Is there a window for when a company can get involved in the EV supply chain before it gets left behind?

I think that’s related to what you’re doing. Because in some cases, you’ve got to make an investment in infrastructure. The game is still being played. It’ll be halftime in a minute, and you’re not even in the game yet. It depends on the individual [company’s] activities, from charging stations to rare earth minerals to batteries to battery packs, the cells and the modules and all that.

You’ve got to get entrenched in that from a knowledge perspective, and you have to have personnel that is trained in that space. Those individuals come at a premium, so you have to overpay for the talent before you even get in the game. You’ve got to have the team when you go to an OEM.

When it comes to diversity, equity and inclusion, how is the energy among the automakers when it comes to trying to improve? Is it the same energy compared with 2020, after the George Floyd incident?

What we’re finding is that, and I don’t know what’s the actual percentage, but I would say it’s probably 90 percent of every company now has a DEI officer — head of diversity — who answers to the president or the CEO. That is so important because minorities now have an advocate internally that’s a part of the org chart — that has a voice.

I think we’ve come a long way, and we still have a long way to go. But I think that was very important. There has been an openness and a willingness from the CEOs. The CEOs have been absolutely great. We haven’t had any pushback from the CEOs. I think we’re going in the right direction.

PrevPreviousHyundai NA CEO Muñoz talks about the future of EVs, hybrids
NextUsed-car market is in a ‘weird’ spotNext