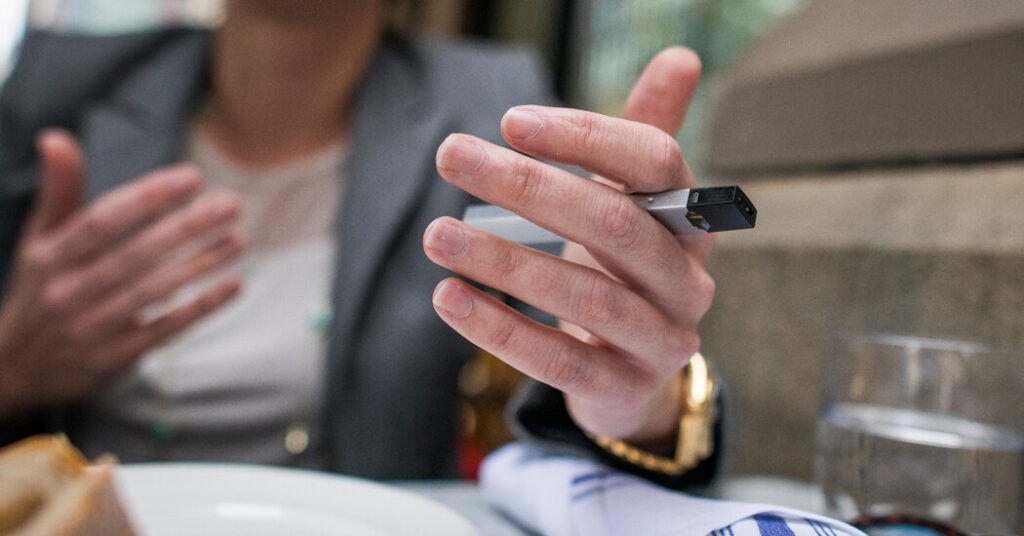 F.D.A. Lets Juul Appeal Ban and Stay on the Market During a Review


The Food and Drug Administration has decided to allow Juul Labs’ vaping products to stay on the market temporarily, citing “scientific issues” that warrant a review of the agency’s ruling last month to ban the company’s e-cigarettes.

The agency’s decision to conduct an internal review effectively moves the dispute out of the public eye in appellate court, where Juul had initially received a temporary reprieve, and returns it to the agency’s private administrative process. But the F.D.A. cautioned that its latest move, first announced in a tweet on Tuesday night, should not be misconstrued as a decision rescinding the original order.

The F.D.A.’s decision is a twist in Juul’s journey toward seeking official authorization under rules that required it and other companies to prove their products provide more benefit to public health than harm. It was blamed for the teenage vaping crisis more than four years ago, drawing widespread anger from parents, schools and local policymakers as well as Congress.

On June 23, the F.D.A. took many by surprise when it issued an order telling Juul to stop selling its e-cigarette products in the United States. In a statement, the agency said that Juul’s applications to remain on the market “lacked evidence” to prove they would benefit public health and included “insufficient and conflicting data” about “potentially harmful chemicals leaching” from its e-liquid pods.

The ban was celebrated by those who said the company should be held to account for luring teenagers to use its product with appealing mango and crème brûlée flavors and ads depicting young people. The F.D.A.’s decision was panned by those who pointed to e-cigarettes as a cessation alternative for millions of adult smokers who switched to the devices, which are widely credited with being less toxic than traditional cigarettes.

Vaping companies have been required to seek the F.D.A.’s authorization to sell their products, and many are going through that process now. The F.D.A. has said that it had approved a handful of vaping devices and denied more than a million applications.

For its part, Juul had already filed a brief in support of a longer-term appeal in the U.S. appeals court in Washington, D.C., calling the agency’s ban “discriminatory” and accusing it of “threatening” conduct.

In the brief filed last week, Juul argued that it had helped two million adult smokers quit traditional cigarettes. Juul also said it had been treated unfairly, noting that it had been singled out by members of Congress who nudged the agency to spurn the company.

Juul also said that it had received just one opportunity to address the F.D.A.’s concerns before it issued the denial. In contrast, other companies were allowed to submit up to 14 amendments to their applications, Juul said in its court filing.

The F.D.A. has not released the document outlining its reasons for denying Juul’s marketing application. Juul’s court filing said the agency contended “in more than two dozen places” that Juul did not provide enough data on four chemicals.

The company’s filing said that the four chemicals were identified in a study examining toxins leaching from its plastic pods into the e-liquid inside, which becomes vaporized when heated and is then inhaled by users. The agency took exception with the fact that none of those chemicals had appeared in Juul studies listing the makeup of its devices’ aerosol plume, the company said in its court briefing.

Juul said it supplied thousands of pages of data in which those chemicals would have been disclosed if they were detectable in the aerosol.

Dr. Laura Crotty Alexander, an e-cigarette researcher and associate professor of medicine at the University of California, San Diego, has published studies critical of Juul devices’ effects on the brains of mice.

But after reviewing the company’s court papers, she said its argument made sense: It is possible that chemicals that show up in a liquid turn into a different compound after they are heated and vaporized. Dr. Crotty Alexander said that occurred in her own studies of chemicals in e-cigarettes.

“It’s not surprising that a chemical that was originally liquid is not an aerosol,” Dr. Crotty Alexander said. The names of the chemicals in question were redacted, she noted, making it difficult to assess further.

Joe Murillo, Juul’s chief regulatory officer, said the chemicals in the liquid “may not be transferred and detected in the aerosol due to a variety of factors, including compound volatility or chemical structure.”

In its court filing, Juul emphasized that the F.D.A. had all the information it needed to see that any leached chemicals were undetectable in its aerosol.

Juul “did provide that data — 6,000 pages of it,” the company said in its filing. “Had F.D.A. done a more thorough review (like it did for other applicants), it would have seen data showing that those chemicals are not observable in the aerosol that Juul users inhale.”

Theodore Wagener, director of the Center for Tobacco Research at The Ohio State University, said the agency’s initial ban was striking, given that independent research teams, including his own, had found that Juul devices were far less toxic than traditional cigarettes.

“Juul aerosol has significantly lower-level and fewer toxicants than cigarettes, for sure,” Dr. Wagener said, noting that Juul’s devices also had lower levels of chemicals than other e-cigarettes. “That’s what made this surprising to me.”