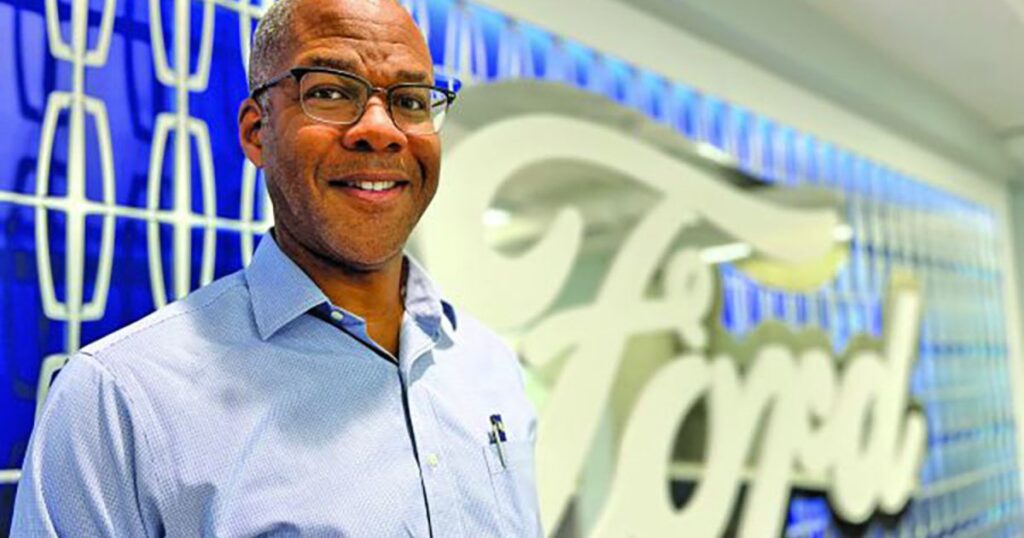 
WASHINGTON — Auto industry newcomer Chris Smith says discussions about electric vehicles should be less about the politics and more about the product.

EVs are “not a partisan thing,” Smith said. They’re “terrific products that American consumers are going to want.”

As Ford Motor Co.’s chief government affairs officer — his first role in the auto industry — Smith says one challenge his team is tasked with is shifting the way people — consumers and policymakers alike — think about EVs as they inch their way into the mainstream.

“There’s this past of viewing electric vehicles as expensive toys or compromised compliance vehicles,” he said. “Ford’s taking a different approach.”

The Dearborn, Mich., automaker plans to build 2 million EVs globally by 2026, and expects 40 to 50 percent of its global sales to be all-electric by 2030.

Smith, who was hired in March to succeed industry veteran and lobbyist Mitch Bainwol, has spent more than a decade working in the energy sector, including positions at the U.S. Department of Energy during the Obama administration and most recently at liquefied natural gas operator Cheniere Energy.

Smith, 54, sat down with Staff Reporter Audrey LaForest at Ford’s Washington office to discuss his new role and the automaker’s EV strategy. Here are edited excerpts.

Q: This is your first time working for an automaker. What do you think so far?

A: I spent my whole career in energy, so this is a new space for me, but it’s a really exciting time to be here at Ford. One of the epiphanies after being here for a little while is that the big challenges are new for everybody because it’s such an incredible period of change and transition. The company is going through more change than it has in its long history. Many of the issues that are important in my previous life in energy — both in the private sector and then also in the public sector when I was at the Department of Energy — convey to the challenges here. It’s about supply chain and business models and customers and all the policy drivers that allow you to make these massive transitions.

How does your experience in energy translate to Ford’s electrification push?

I almost feel like I’m still in energy. I’ve just been pushed further downstream because many of the challenges that we have here deal with the same overall meta challenges that you have to think about when you’re thinking about the sustainability of energy and the future of how we’re going to power our industries, the way we make things, the way we create jobs, the way we move people and goods. The overarching challenges are, in many ways, similar. How’s the supply chain going to work? Where are the materials going to come from? How do you create business models that serve our customers?

At the end of the day, if we’re not doing things — both creating terrific products and putting forth great services that serve customers — then we’re not going to be successful in doing any of the things that we need to accomplish.

What about the federal government’s role in the transition?

If you think of any major transition the U.S. has gone through, there’s going to be some role for government to play. We’ve set really ambitious, aggressive goals for ourselves because we believe in the product. We believe in the American workers that are building these cars, day in and day out. We believe in our engineering prowess. We are very enthusiastic about the capability of the vehicles themselves, but it’s important for us to work with policymakers to make sure that we’re creating an environment in which U.S. companies are competitive. We have an opportunity to win the future here, but there are things that we’re going to have to do in cooperation with policymakers to make sure that we get to the right place.

In June, Ford joined other automaker CEOs in urging congressional leaders to lift the 200,000-vehicle-per-automaker cap on the current $7,500 tax credit for consumers buying eligible EVs. What’s at stake if Congress doesn’t act?

It’s a dynamic time. One thing I’ll demur from is making any predictions about what Congress could do next because I just don’t know. I know that we’ve been consistent about what we need, and what we think the American industry needs. We’re pushing hard, but right now, we’re at relatively low levels of penetration. I’m very bullish on our future here because when you put this vehicle next to the vehicles that were traditionally driven, they’re just terrific vehicles. They just have new levels of functionality, new levels of performance. But we do need some help on infrastructure. We do need the right policies that push us in the right direction, and we need to make sure that our government is supporting U.S. industries in the ways that we see foreign governments supporting their industries. We have to be able to compete.

One thing that I hope you see in our communications is that we’ve been consistent. We do think the EV tax credit is important. We think it’s important not only for Ford but for U.S. automakers and U.S. industry. We’re just going to continue to push for policies that I think are good not only for Ford and Ford’s consumers, but also for American competitiveness, for job creation, for our economy. The future is going to be electric vehicles, and we’ve got a terrific opportunity to make sure that future is designed and built and manufactured right here in the U.S.

PrevPreviousSaudi sovereign fund will be Aston Martin’s No. 2 shareholder
NextFed Governor Waller Signals a Full-Point Rate Increase is Possible, but Not YetNext