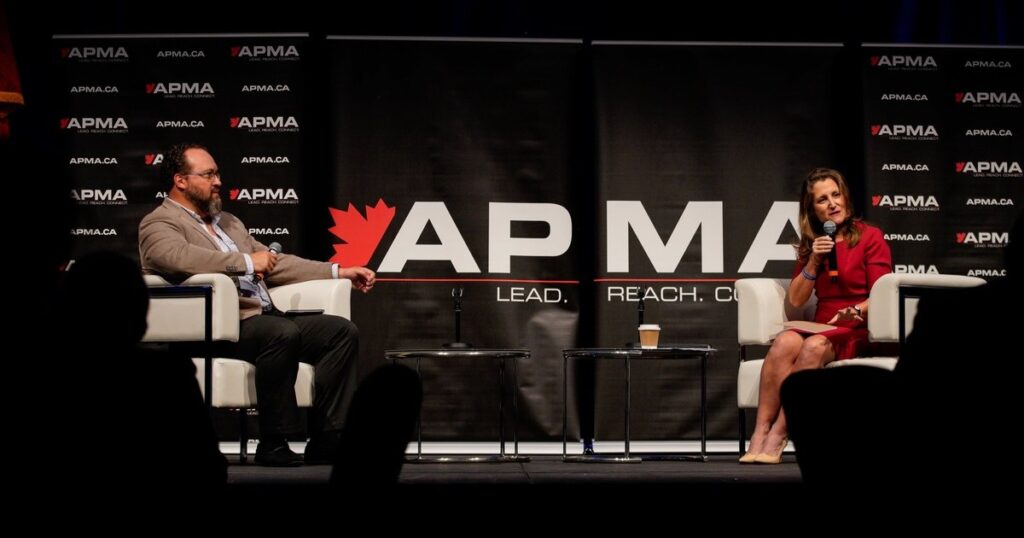 
Despite Canada’s deputy prime minister warning auto suppliers of gathering economic storm clouds, some listening to her speak at the 2022 Automotive Parts manufacturers’ Association Conference on Wednesday thought she was a breath of fresh air.

Chrystria Freeland, who is also the federal government’s finance minister, bluntly told the roughly 300 executives in attendance that “our economy will slow.”

She minced no words as she continued her address.

“Our unemployment rate will not stay at a record low,” she continued.

“I think it’s refreshing. We need some real talk. I like that she does real talk,” said Flavio Volpe, who, as president of the association represents and lobbies governments on behalf of hundreds of Canadian suppliers. “The view is grim, but I think what she was giving us was a view at a macro level.

“At least she didn’t come in and say ‘there’s a lot of hope’ and give us the platitudes that mean nothing.”

The fear of a global recession looms as the war in Ukraine drags on and inflation continues to run historically hot— although the rate slowed again in September.

“This is a challenging global environment. We’re seeing a lot of big forces at work in the global economy and Canada is definitely subject to them,” Freeland told reporters later in the day.

“I thought it was important for her to be candid. And she was definitely that,” Wark said. “And the folks in our research department are coming up with a similar view.

“But I don’t think from an automotive perspective, with all that’s gone on with supply chain issues, the pandemic, the fact that inventory levels continue to be at record lows, I don’t think the impact will be as great on the auto sector.

“Auto has been held back because of supplier constraints. They could have built a lot more vehicles over the last two years but supplier constraints prevented that. I think there still is a backlog to wanting to purchase new vehicles and being unable to. There’s going to be a catchup.”

Automakers continue to cut output on a weekly basis. Chip supply ebbs and flows seemingly without rhyme or reason.

Yet automakers continue to invest in Canada. They announced $13 billion in new factories and retooling over an eight-week span in the spring alone. Since then, they’ve added battery-materials processing plants in Ontario and Quebec. And Volkswagen and Mercedes-Benz have inked deals to get their hands on Canadian critical minerals.

On Wednesday, Ontario Economic Development Minister said he was in talks with six more companies with plans for North American EV battery plants and he promised he would land at least one of them.

“From an overall standpoint I think our sector is better positioned than it’s ever, ever has been,” Wark said.

But, he warned there will be job loss as the industry transitions to electrification.

“Some suppliers are going to build components today that aren’t part of an EV tomorrow. And we’re monitoring that,” he said.

As Freeland warned about higher unemployment, Volpe lamented the current lack of workers.

“We don’t have enough labour. We have an unnatural balance in our labour market,” he said.

He said that was the message he, executives and Unifor sent Freeland during closed-door roundtable discussion, which she offered to have.

“People in that room were giving her ideas we thought had a lot of merit,” Volpe said.