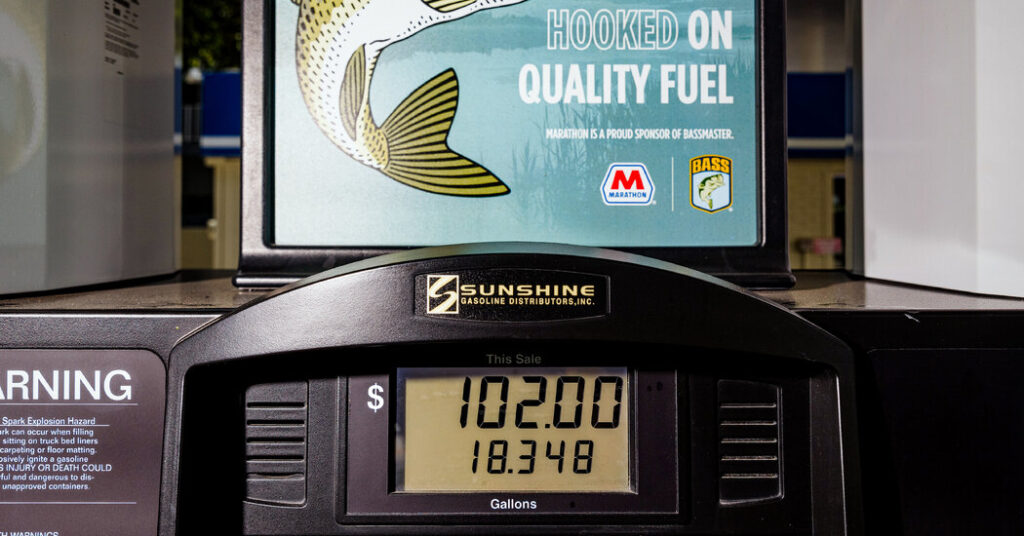 Gas Prices Force Many to Rethink Driving, and Spending


KATY, Texas — Most Americans would gladly pay the $4.29 for a gallon of regular gas Buc-ee’s was charging this week on Interstate 10 between Houston and San Antonio, more than 50 cents below the national average.

But with prices more than $1.50 a gallon higher than they were a year ago, even Texans are complaining, and changing their buying habits to make do.

“It makes me so stressed out just thinking about buying gas,” said Nancy Oncken, a retired kindergarten teacher, as she filled up her station wagon on her way to join five cousins at a water park outside San Antonio for the long weekend. “It’s now always in the back of my mind to be conservative about what I buy.”

When Ms. Oncken drives through Buc-ee’s, the well-known Texas-scale convenience store with enough gasoline pumps to fuel an army, she often buys a souvenir bumper sticker, tumbler or key chain adorned with the cartoonish bucktoothed beaver wearing a baseball cap. But this year, she said, she will keep a grip on her wallet.

Drivers will get a bit of a break this Fourth of July weekend now that gasoline prices have eased about 15 cents a gallon over the last two weeks. But with the Russian invasion of Ukraine settling into a grinding war of attrition, constraining global energy supplies, gas prices are not likely to decline much more this summer.

At $4.84 a gallon on Friday, the national average price for regular gas was $1.72 above a year ago, according to the AAA motor club. The fuel prices are altering buying patterns, and there are early signs that people may be rethinking their driving.

Economists report that travel spending remains strong this year because of pent-up demand after two years of the Covid-19 pandemic. But interviews with drivers at Buc-ee’s in Katy, Texas, suggest that consumer confidence is beginning to erode under the pressure of high prices for fuel, food and housing. Ms. Oncken and several others said the holiday weekend might be the only vacation they would take this summer, a sharp break from the past.

A recent report by Mastercard SpendingPulse, which monitors national retail sales, showed that despite a roughly 60 percent increase in gasoline prices from last year, total spending at gas station convenience stores was up only 29 percent, suggesting that many like Ms. Oncken are compensating for gas prices by saving on little, whimsical indulgences.

“Opting for a lower fuel grade, driving a bit less or skipping that slushy or candy bar in the store are part of a bigger picture of choices consumers are making every day in the face of higher prices,” said Michelle Meyer, U.S. chief economist at the Mastercard Economics Institute.

The shock is particularly acute given that people grew accustomed to low gasoline prices during the pandemic, when oil prices collapsed from the decline in commuting and other economic activity.

It will take several months, at least, to sort out all the effects of higher prices on consumer behavior. People are spending more at restaurants than a year ago, and sales of luxury goods remain high, according to Mastercard. But hotel industry executives say many who drive on vacation are choosing destinations closer to home to save on gas.

That may be one reason for the modest drop in gasoline prices in recent weeks. Recent Energy Department data suggested that the volume of gasoline sold nationwide had dropped 2 percent or more from a year earlier. And auto dealers in Houston said customer interest in more fuel-efficient cars, as well as electric and hybrid vehicles, was growing, although shortages of parts have limited the supplies of new models.

Some transportation and energy experts say the demand for gas has declined partly because more people are flying rather than driving on vacations this year than last, although rising ticket prices and airport delays may reverse that trend as the summer progresses. In some cities, more people are returning to mass transit as concerns over Covid ease.

Inflation and a slowing in some areas of the economy may mean some businesses are cutting back on shipping or shortening their supply chains when possible to save fuel.

Giovanni Circella, a transportation expert at the University of California, Davis, said that over the years, short periods of high gas prices had not fundamentally changed driving habits since people still needed to commute to work and carry on daily chores like shopping and driving their children to school and activities.

“But what will change is if the gas prices stay high for an extended period of time, Americans will start changing the type of cars they drive,” he said.

A report released this week by RBC Capital Markets found that over the last 30 years, retail gasoline prices in the United States increased more than 30 percent year over year during 39 individual months. Of those months, demand fell 2 percent or more from the previous year only 12 times. “In short, protracted demand destruction events have historically been rare,” the RBC report concluded.

Currently, a relatively small 3.5 percent of total spending by Americans is devoted to fuel, according to the same RBC report. That is slightly below the 3.6 percent average over the last 30 years.

“The real risk to oil demand and prices is when you start to see the economy slowing down,” said Mark Finley, a Rice University energy economist.

Mr. Finley added that despite being a relatively small part of a family’s budget, high gasoline prices had an inordinate impact on consumer confidence. “There is a sense of crisis with people saying, ‘There is something wrong here, and I need to be more careful,’” he said.

Energy experts say costs multiply for lower-income families, especially those in rural areas, since they generally have older, less fuel-efficient cars and drive longer distances to work. Gas spending can consume up to 10 percent of those families’ incomes.

How high oil prices will go depends on many factors, some of which are offsetting. Political unrest in Libya and Ecuador is reducing global supplies, though President Biden may be able to persuade Saudi Arabia to produce more oil during his coming trip to the Persian Gulf. Should China succeed in controlling its Covid epidemic, its appetite for oil could grow and take supplies off the market, but that is no certainty.

And the course of the war in Ukraine could determine how plentiful Russian oil supplies will be on global markets.

American gasoline and diesel inventories in late June were at their lowest seasonal levels in more than a decade in large part because of the closing or retooling of several refineries over the last two years.

That is complicating things for Brenda Davis, a San Antonio insurance client manager, who filled up in Katy the other day. When driving through Buc-ee’s, she usually picks up a Mud Pie dish to add to her dining set, but this year she said she would resist.

“I’m trying to fill up on my budget,” she said. “The prices are ridiculous.”