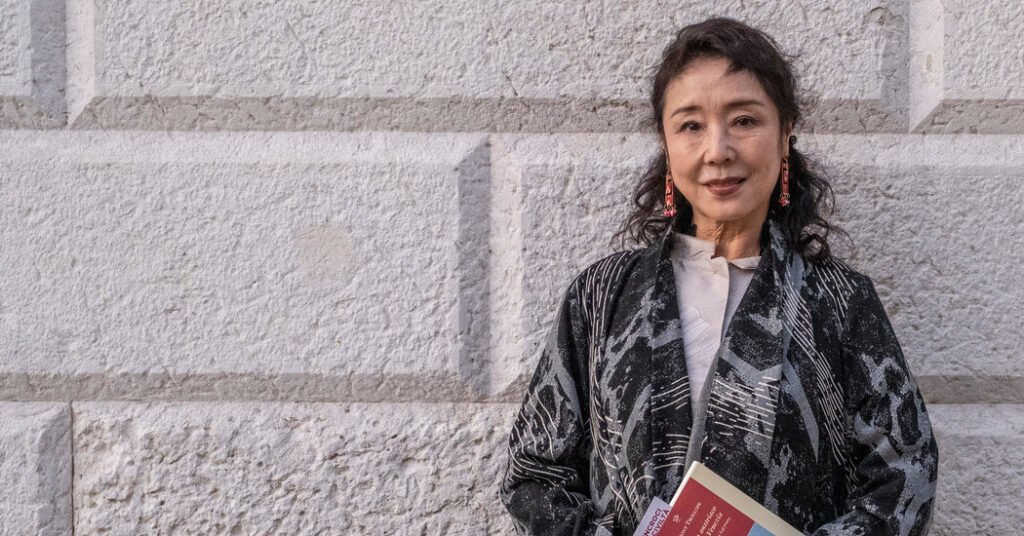 Geling Yan Says a Movie Fails to Credit Her. The Film World Shrugs.


In 2018, as a celebrated Chinese director prepared to film a movie, his team sent the novelist Geling Yan a 33-page script with her name printed on each page. Ms. Yan said that made sense to her because she had written the Chinese-language novel that inspired the film.

But when the film, “One Second,” was released in China and elsewhere two years later, her name did not appear in the credits. It was directed by Zhang Yimou, an Oscar-nominated filmmaker whose works include “Raise the Red Lantern” and “House of Flying Daggers.”

Ms. Yan, who has publicly criticized the Chinese government’s response to the coronavirus pandemic, said she was not surprised to see her name removed from a film produced in the country. Still, she said, she thought that the companies distributing and promoting it outside China could perhaps agree to credit her in some way.

Ever since, Ms. Yan and her husband, Lawrence Walker, who is also her manager, have been asking companies in Asia, Europe and North America to do just that, either in the film itself or in their promotional materials.

“I don’t think they should acquiesce to this kind of infringement,” said Ms. Yan, an established Chinese American novelist who lives in Berlin.

But they have mostly stayed silent. Ms. Yan’s campaign, and the muted response, highlights how an apparent censorship decision in China can quietly ripple through the art-house film world.

“It is not the first time that we are involved in an issue like this with Chinese cinema,” José Luis Rebordinos, the director of the San Sebastián Film Festival in Spain, told Mr. Walker in an email last year. Mr. Rebordinos added that, despite his best efforts to help, “sometimes we can’t do anything.”

“One Second,” released in 2020, is set during the Cultural Revolution in China. It follows a prisoner who escapes from a labor camp to see a newsreel, hoping to catch a glimpse of his daughter.

Ms. Yan, 63, has said the movie’s plotline mirrors one from “The Criminal Lu Yanshi,” her 2011 novel about a Chinese intellectual who is sent to a labor camp in the 1950s.

The film was “definitely influenced” by the book, even though it diverged in other ways, said Huang Yi-Kuan, a literature professor at National Changhua University of Education in Taiwan. “I think it should at least be mentioned that the inspiration for this movie was extracted from Yan Geling’s novel,” she said.

Ms. Yan sold the film rights for the novel to Mr. Zhang in 2011, according to a contract reviewed by The New York Times. Three years later, he released “Coming Home,” a movie based on “The Criminal Lu Yanshi” about a political prisoner during the Cultural Revolution. The contract did not explicitly prohibit Mr. Zhang from making another movie based on the same book.

In the fall of 2018, a literary adviser to Mr. Zhang told Ms. Yan over WeChat, a Chinese messaging platform, that “One Second” could not credit “The Criminal Lu Yanshi,” according to screenshots of their correspondence that Ms. Yan’s husband provided to The Times. The adviser said doing so could create a legal problem for the director because he had been having an unrelated copyright dispute with a Chinese production company.

As a compromise, the adviser offered to add a line at the end of the film thanking Ms. Yan for her contribution without mentioning her novel, the correspondence shows. Ms. Yan agreed to that, she said in a recent interview, because she trusted Mr. Zhang.

“We had worked together for so many years,” Ms. Yan said. In addition to “The Criminal Lu Yanshi,” one of her other novels became the basis for Mr. Zhang’s film “The Flowers of War,” which came out in 2011 and stars Christian Bale.

But just before “One Second” was released, she said, the literary adviser called to say that the Chinese government had ordered for her name to be removed from the credits.

Neither Mr. Zhang nor the literary adviser who spoke with Ms. Yan responded to interview requests. Neither did the China Film Administration, a state agency overseeing the country’s film industry.

Huanxi Media, one of the production companies behind “One Second,” said in an email that the film “has nothing to do with” Ms. Yan’s novels. And mainland Chinese films cannot be changed after they receive public release permits, the company added.

In 2019, “One Second” was unexpectedly withdrawn from the Berlin Film Festival, a move that the film’s official account on Weibo, a Chinese social media platform, attributed to “technical reasons” — a euphemism in China for government censorship.

Mr. Walker said he and his wife understood the realities of the Chinese market. What they can’t accept, he said, is that most of the companies and festivals distributing or promoting the film overseas have not been willing to credit her in any way.

“This isn’t something happening to some poor soul in some far-off part of China,” Mr. Walker said. “This is happening to a professional scriptwriter and a U.S. citizen — now, in the United States and other countries — as a result of Chinese censorship.”

There are two notable exceptions.

One of the companies Mr. Walker wrote to, Mubi, a streaming service based in London that caters to art-house cinephiles, now lists Ms. Yan on a page of its website that promotes “One Second.”

And this month, Yorck, a cinema group in Berlin, began showing what it called an “introductory note” before its screenings of “One Second” that credits Ms. Yan’s novel as the inspiration for the film. Marvin Wiechert, a spokesman for Yorck, said in an email that the company learned of her claims about a missing credit from her lawyers and people who attended a recent preview screening of the film in Berlin.

“We felt it would be a fitting response as an arthouse exhibitor who cares deeply about artistic expression and ownership,” he said of the decision to add the note.

But Mr. Walker said he had not heard from Mubi, Yorck or other companies involved in the film’s international distribution. The list includes companies in Hong Kong and the United States, as well as film festivals in Boston and in two Canadian cities. None of them responded to inquiries from The Times except a spokeswoman for the Toronto International Film Festival who said that the festival’s director was too busy for an interview.

Ms. Yan has not filed any lawsuits over her claim. For now, Mr. Walker said, her legal team is seeking a settlement in France or the United States.

Isabelle Denis, the head of legal and business affairs for Wild Bunch International, the film’s international distributor in Paris, told The Times in an email that the company did not produce “One Second” and therefore had no authority to either judge Ms. Yan’s claim about a missing screen credit or act as an intermediary between her and the filmmaker.

Ms. Yan’s case echoes previous instances of movie censorship in China, a country that is a huge source of income for Hollywood. This year, for example, the ending of “Fight Club,” the 1999 cult movie starring Brad Pitt, was cut from its Chinese edition. It was restored only after the changes drew international attention.

In Ms. Yan’s case, her lawyers would probably not be able to make a strong legal case for giving her a credit in “One Second” because Mr. Zhang never agreed in writing to do so, said Victoria L. Schwartz, a law professor at Pepperdine University in Malibu, Calif.

However, legal exposure is not the same as reputational risk, said Professor Schwartz, who specializes in entertainment law and intellectual property disputes. Ms. Yan’s campaign, she said, raises the question of whether the film industry in the United States, including labor unions that represent writers, should develop better standards for evaluating international films from “censor-heavy markets.”

“Should there be norms in place?” Professor Schwartz said. “Should these companies do better not because they have to legally, but because it’s the right thing to do?”