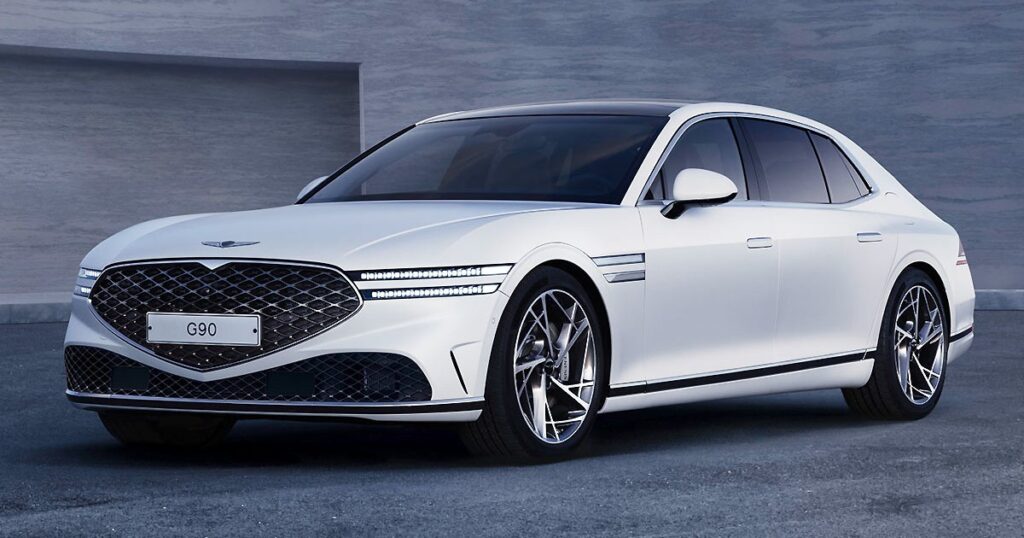 
GV60: Genesis’ first dedicated electric vehicle, the GV60, went on sale in June at select dealers in California, Connecticut, New Jersey and New York, priced below $60,000.
The two variants of the 2023 GV60 — Advanced and Performance — have a dual motor and all-wheel-drive layout and use a 77.4-kilowatt-hour battery. The GV60 Advanced has a 74-kilowatt motor in the front and a 160-kW motor in the rear for a total of 314 hp and 248 miles of range. The GV60 Performance has a 160-kW motor in the front and rear for combined output of 429 hp. It has 235 miles of range. Both models offer vehicle-to-load capability and a host of safety features.

Electrified G80: The U.S. launch of the Electrified G80 midsize sedan originally was expected in the first half of 2022, but the automaker says it will now be closer to the end of summer or early fall. The model is basically the same as the gasoline-powered G80, except for the 87.2-kilowatt-hour battery that cuts slightly into passenger and cargo space. The EV will have one trim, Prestige, that comes configured with awd via a dual electric motor layout. The new electrified sedan is expected to deliver 365 hp and travel 282 miles on a single charge.

Electric G70: The second generation of the G70 should arrive in 2025 as a dedicated EV built on the E-GMP platform. It’s unclear whether Genesis will stick to the “Electrified” naming convention it’s using on its G80 and GV70 since the model’s availability only with an all-electric powertrain already signals that it’s electrified.

GV80: The GV80 is a new model that has helped Genesis tap into the growing crossover market and gain brand recognition. For 2023, rear-wheel drive is no longer optional on the base turbo 2.5 engine. Expect a freshen in 2023 that will likely be accompanied by a GV80 coupe. While the GV80 offers a third row, it’s one of the smallest in its class. The expected coupe will be a five-seater.

A redesign should come in 2026 that will include an electric variant.

GV70: Like the GV80, the GV70 has been a sales hit. It carries over for 2023 with some trim enhancements and new colors, and a freshen is expected in 2024. A full redesign may not come until 2027 as the GV70 could transition to a new electric platform, likely the E-GMP, at which time the gasoline-powered version will be dropped.

G90: The second generation of Genesis’ flagship large sedan is on sale now for the 2023 model year with a starting price hovering around $90,000. It has two turbocharged awd powertrains. The base is a 3.5-liter V-6 that delivers 375 hp, and the top-shelf option is an “E-Supercharged” version of the same engine, using a 48-volt mild hybrid system and an electric supercharger to boost output to 409 hp. This option replaces the outgoing model’s 5.0-liter V-8.

Exterior styling has been revamped, including a mesh grille and horizontal headlights that resemble the shape of the winged Genesis badge. The hood and fenders are now part of a single-panel clamshell design.

Both versions get high-tech features such as doors that open and close with single-touch movements and a fingerprint-enabled start function. Nappa leather and massaging front seats are standard. It’s expected that the G90 will undergo another redesign in 2028.

G80: The Genesis G80 midsize sedan carries over for the 2023 model year but brings with it a more powerful Sport trim. The Sport comes standard on all models with the 375-hp twin-turbo 3.5-liter V-6 and awd. A higher-end Sport Prestige trim adds larger 20-inch wheels, Nappa leather, carbon-fiber trim and a 12.3-inch digital gauge cluster. Both Sport trims offer rear-wheel steering and have distinct styling cues such as an exclusive grille design and dark chrome accents.

G70: The compact sport sedan was freshened for 2022 with new packaging and pricing adjustments. For 2023 the G70 Prestige becomes the Sport and all configurations get 19-inch wheels. A new-generation G70 will likely appear in 2025 that will be all-electric, making it the first existing Genesis vehicle to move to the E-GMP platform.