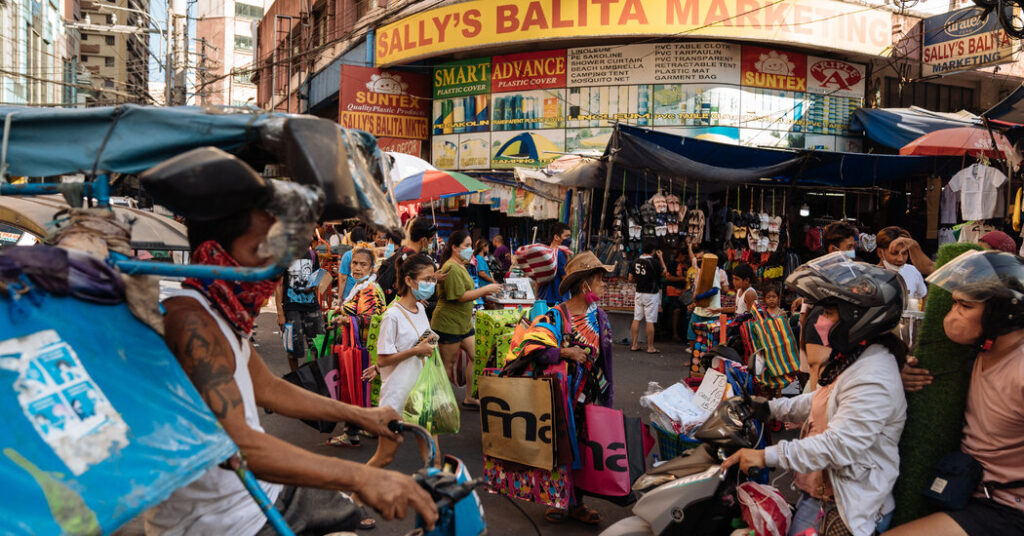 
Central bankers around the world are lifting interest rates at an aggressive clip as rapid inflation persists and seeps into a broad array of goods and services, setting the global economy up for a lurch toward more expensive credit, lower stock and bond values and — potentially — a sharp pullback in economic activity.

It’s a moment unlike anything the international community has experienced in decades, as countries around the world try to bring rapid price increases under control before they become a more lasting part of the economy.

Inflation has surged across many advanced and developing economies since early 2021 as strong demand for goods collided with shortages brought on by the pandemic. Central banks spent months hoping that economies would reopen and shipping routes would unclog, easing supply constraints, and that consumer spending would return to normal. That hasn’t happened, and the war in Ukraine has only intensified the situation by disrupting oil and food supplies, pushing prices even higher.

Global economic policymakers began responding in earnest this year, with at least 75 central banks lifting interest rates, many from historically low levels. While policymakers cannot do much to contain high energy prices, higher borrowing costs could help slow consumer and business demand to give supply a chance to catch up across an array of goods and services so that inflation does not continue indefinitely.

The European Central Bank will meet this week and is expected to make its first rate increase since 2011, one that officials have signaled will most likely be only a quarter point but will probably be followed by a larger move in September.

Other central banks have begun moving more aggressively already, with officials from Canada to the Philippines picking up the pace of rate increases in recent weeks amid fears that consumers and investors are beginning to expect steadily higher prices — a shift that could make inflation a more permanent feature of the economic backdrop. Federal Reserve officials have also hastened their response. They lifted borrowing costs in June by the most since 1994 and suggested that an even bigger move is possible, though several in recent days have suggested that speeding up again is not their preferred plan for the upcoming July meeting and that a second three-quarter-point increase is most likely.

As interest rates jump around the world, making money that has been cheap for years more expensive to borrow, they are stoking fears among investors that the global economy could slow sharply — and that some countries could find themselves plunged into painful recessions. Commodity prices, some of which can serve as a barometer of expected consumer demand and global economic health, have dropped as investors grow jittery. International economic officials have warned that the path ahead could prove bumpy as central banks adjust policy and as the war in Ukraine heightens uncertainty.

“It is going to be a tough 2022 — and possibly an even tougher 2023, with increased risk of recession,” Kristalina Georgieva, the managing director of the International Monetary Fund, said in a blog post on Wednesday. Ms. Georgieva argued that central banks need to react to inflation, saying that “acting now will hurt less than acting later.”

In recent years, emerging markets have often raised interest rates in anticipation of the Fed’s slow and steady moves to avoid big swings in their currency values, which depend partly on interest rate differences across borders. But this set of rate increases is different: Inflation is running at its fastest pace in decades in many places, and a range of developed-economy central banks, including the European Central Bank, the Swiss National Bank, the Bank of Canada and the Reserve Bank of Australia, are joining — or may join — the Fed in pushing rates quickly higher.

The last time so many major nations abruptly raised rates in tandem to fight such rapid inflation was in the 1980s, when the contours of global central banking were different: The 19-country euro currency bloc that the E.C.B. sets policy for did not exist yet, and global financial markets were less developed.

That so many central banks are now facing off against rapid inflation — and trying to control it by slowing their economies — increases the chance for market turmoil as an era of very low rates ends and as nations and companies try to adjust to changing capital flows. Those changing flows can influence whether countries and businesses are able to sell debt and other securities to raise money.

“Financial conditions have tightened due to rising, broad-based inflationary pressures, geopolitical uncertainty brought on by Russia’s war against Ukraine, and a slowdown in global growth,” Janet L. Yellen, the U.S. Treasury secretary, said in speech last week. “Now, portfolio investment is beginning to flow out of emerging markets.”

For financial markets, the adjustment to higher interest rates could be “bumpy, there’s no way around that,” said George Goncalves, head of U.S. macro strategy at MUFG Securities Americas. And as rates move higher, stock and other asset prices may drift lower in a lasting way, as savers can receive higher paybacks on less-risky investments, like government debt.

“The incentive was to chase yield, and that would push markets to higher valuations than they would have had based on fundamentals,” Mr. Goncalves said.

The simultaneous action also ramps up the risk that some nations could fall into a recession as consumers and companies pull back their spending.

Mr. Kasman estimates that the United States and Western Europe have a 40 percent chance of a recession within the next year. That risk stems both from central bank moves and upheaval from Russia’s war in Ukraine, which shows no signs of ending. But if the recession can be averted now — leaving unemployment low, consumers still spending and inflation elevated — it could mean that the Fed and other central banks have to raise rates more later on to choke off growth and bring price increases down, he said.

Fed officials have said they still aspire to engineer what they often call a “soft landing,” in which hiring and spending cool down enough to allow wage growth and prices to moderate, but not so much that it plunges the economy into a deep and painful downturn.

But inflation has proved uncomfortably stubborn. The latest Consumer Price Index reading in the United States exceeded analyst expectations at 9.1 percent. In Canada, inflation is running at its fastest pace since 1983. In the United Kingdom, it is similarly at a 40-year-high.

That underscores that global factors, including a constrained supply of consumer goods like cars and clothing and a spike in oil and food costs, are prompting much of the price surge. It also explains why so many central banks are staging a similar — and faster — response, even if doing so increases the risk of a recession.

The Bank of England was the first major central bank to kick off rate increases back in December and has been steadily raising rates since. Policymakers are increasingly worried about inflation creating a cost-of-living crisis in Britain and worry that higher rates could compound economic pain. At the same time, they have signaled that they could act more forcefully, taking their cue from their global peers. There is a “willingness — should circumstances require — to adopt a faster pace of tightening,” Huw Pill, the chief economist of the Bank of England, said this month.

“Many central banks are looking at this as a sort of existential question about getting inflation and inflation expectations down,” said Matthew Luzzetti, chief U.S. economist at Deutsche Bank.

The Fed raised rates by a quarter point in March, half a point in May, and three-quarters of a percentage point in June. While its officials have predicted that they will maintain that pace in July, they have also been clear that an even bigger rate increase is possible.

“Inflation has to be our focus, every meeting and every day,” Christopher Waller, a Fed governor, said during a speech last week. “The spending and pricing decisions people and businesses make every day depend on their expectations of future inflation, which in turn depend on whether they believe the Fed is sufficiently committed to its inflation target.”

The Bank of Canada has already gone for a full percentage point move, surprising investors last week with its largest move since 1998, while warning of more to come.

“With the economy clearly in excess demand, inflation high and broadening, and more businesses and consumers expecting high inflation to persist for longer, the Governing Council decided to front-load the path to higher interest rates,” the central bank’s policy-setting council said in a statement.

The central bank in the Philippines also surprised investors with a three-quarter point increase this month, and an array of other central banks have made big moves. More action is coming. Central banks around the world have been clear that they expect to keep moving borrowing costs higher into the autumn.

“I wouldn’t say we’re at peak tightening quite yet,” said Brendan McKenna, an economist at Wells Fargo. “We could go even more aggressive from here.”

A key question is what that will mean for the global economy. The World Bank in June projected in a report that global growth would slow sharply this year but remain positive. Still, there is “considerable” risk of a situation in which growth stagnates and inflation remains high, David Malpass, head of the World Bank, wrote.

If inflation does become entrenched, or even show signs of shifting expectations, central banks may have to respond even more aggressively than they are now, intentionally crushing growth.

Mr. Kasman said the open question, when it comes to the Fed, is: “How far have they gone toward the conclusion that they need to kick us in the teeth, here?”