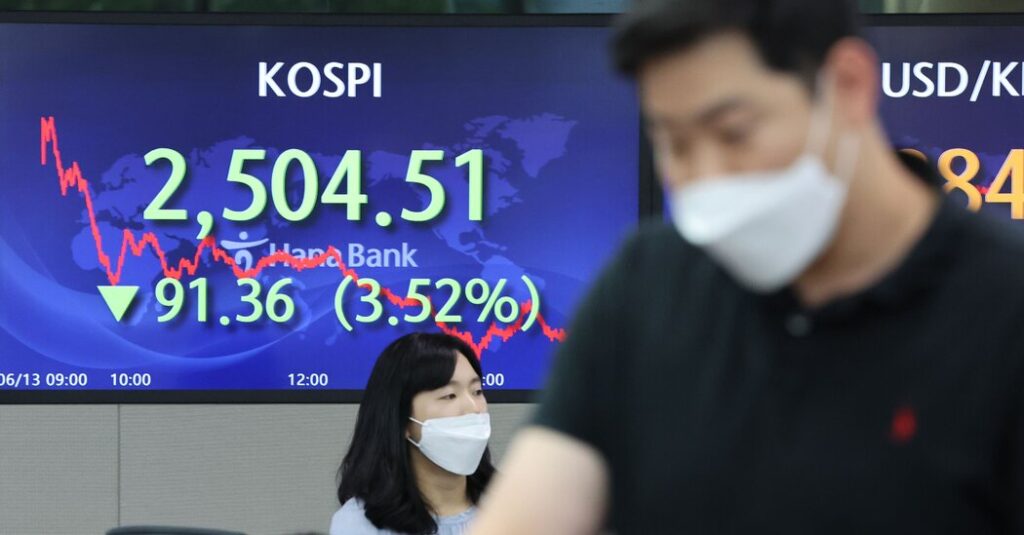 
Markets around the world fell on Monday, extending their losses from last week, as higher-than-expected inflation and lower-than-expected economic growth upend the outlook for interest rates and corporate profits. Wall Street futures pointed to another steep decline at the open of trading, as a wave of selling continued.

Stock markets in Asia closed deep in the red, with Japan’s benchmark Nikkei 225 index dropping 3 percent and South Korea’s Kospi plunging 3.5 percent. In Hong Kong, shares fell by 3.4 percent while an index for China’s biggest companies that are listed in Hong Kong fell 3.6 percent. Japan’s yen fell to a 24-year low versus the U.S. dollar.

Fears in the region were heightened on Monday after officials in Beijing and Shanghai reimposed social distancing measures after another round of mass testing over the weekend. China’s economic growth has been dealt a blow by the country’s “zero Covid” pandemic policy that left much of the country under some form of lockdown for months earlier this year.

In Europe, the Stoxx 600 index was down 2.2 percent in early trading, hitting its lowest level since early 2021. Britain’s FTSE 100 fell 1.8 percent after news that the country’s economy unexpectedly shrank in April, falling 0.3 percent from March. Economists had expected a small increase in growth.

European bond prices fell sharply, as traders priced in a series of interest rate increases by the European Central Bank as it reacts to high inflation across the eurozone. Yields on German and Italian government bonds, which move inversely to prices, hit multiyear highs, implying a steep rise in borrowing costs.

Wall Street was poised for another sell-off on Monday, with futures indicating that stocks were set for a fourth consecutive decline. Premarket trading suggested that the S&P 500 would open 2.2 percent lower, taking it into bear market territory, defined as a 20 percent drop from a recent peak. The index briefly dipped below that level last month, a sign of a significant shift in market sentiment, before recovering to close just above it.

The benchmark U.S. stock index is now “within one bad day’s move of a bear market, and equity futures suggest that we haven’t seen all the negative sentiment expressed yet,” analysts at ING wrote in a note to investors on Monday morning.

A report on Friday showed a surge in inflation in the United States, which rattled markets, as investors worried that the Federal Reserve may have to raise interest rates higher and faster than expected to rein in rising prices, a move that could hit the U.S. economy. In anticipation of these rate increases, and the effect they may have on economic growth, the yields on short-term government bonds have risen faster than long-term yields, meaning the so-called yield curve is close to “inverted,” a signal that has often accompanied recessions.

Cryptocurrencies, which some believe could act as a haven during times of inflation and turmoil, have also been hit hard. Bitcoin, the largest cryptocurrency, fell to an 18-month low of around $24,000. It has lost around half of its value so far this year. The value of all cryptocurrencies fell below $1 trillion for the first time since early 2021, according to Coinmarketcap, down about $2 trillion from their peak.