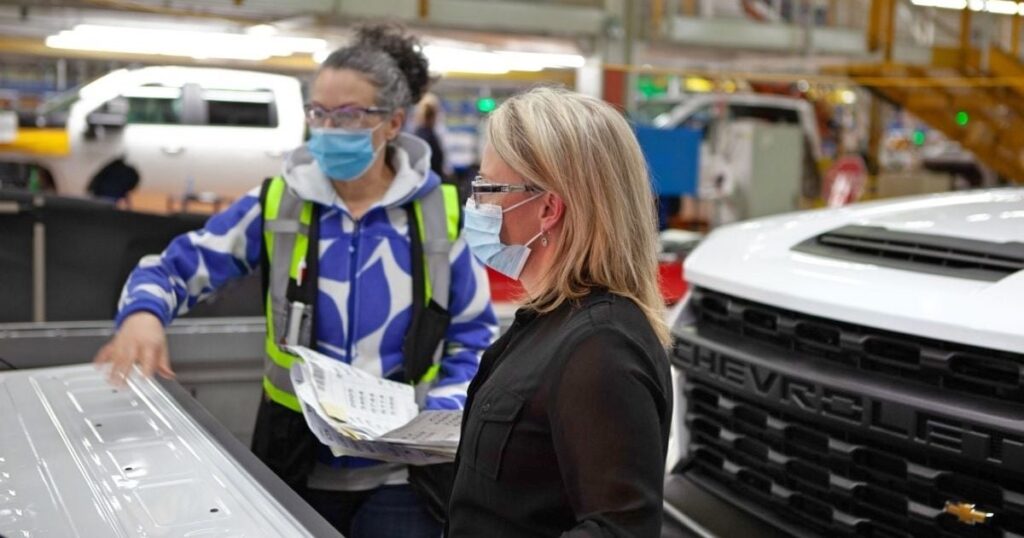 
GM Canada President Marissa West is “all in” on the current retail model but expects changes as digital retailing gains momentum and the industry shifts toward electrification.

“Our dealers will be deeply involved in every single vehicle sale transaction,” West said on the Sept. 30 Automotive News Canada Podcast. “But we as a company are also working to develop the platform … for our customers … to do as much of the shopping and buying process online as they’re comfortable with.

“And then they’ll go and work with their local dealers to complete the process.”

While a growing number of brands, such as Tesla and Polestar, are selling directly to consumers, GM Canada’s 450 franchised dealers will continue to play a critical role, West said.

“Dealers are absolutely our competitive advantage. We have a distributed sales and service channel across the country well-established. They are product experts. They’re going to be integral in the customer education piece of the transition to the electric future, and they’re partners to stay.”

West took over GM Canada in March, replacing Scott Bell, who was appointed global vice-president for Chevrolet. West spoke on a range of issues on the Sept. 30 Automotive News Canada Podcast at automotivenews.ca.

WHAT DOES IT MEAN TO YOU TO BE A WOMAN LEADING GM CANADA?

Canada [offers] a great way to help GM and its mission to become the most inclusive company in the world. Our focus is on equity, diversity and inclusion … Those things are really important to me, both as a GM employee, also as a mother of four children. And I feel like it’s an honour and a responsibility … to continue to lead and show young women that they can do whatever they want to do. And if there’s a will, there’s a way.

GM CANADA MADE A PUSH TO DIVERSIFY ITS WORKFORCE AT OSHAWA ASSEMBLY. HOW IS THAT PROGRESSING?

With more than 50 per cent of our production new hires being women, I think it has brought a lot of energy, a fresh perspective to the plant. … And with the diversity that we’ve been able to attract and many from a variety of different backgrounds, not primarily manufacturing, it gives us a competitive advantage. … So we’re certainly staying on top of it. … And we’ve become sort of a benchmark for some of our other plants. They’re adopting the same hiring practices and striving for similar goals.

HAS THE PLANNED THIRD SHIFT BEGUN IN OSHAWA AND IS LIGHT-DUTY-PICKUP PRODUCTION UNDER WAY?

Yes and yes. We started the light-duty production in May and the third shift was online by the end of July. …We have over 2,600 new jobs at assembly on all three shifts. It’s the only plant in North America that has the capability of building both heavy-duty and light-duty trucks, so it’s a huge win for us.

DOES THAT BOOST THE PLANT’S FUTURE?

Yeah, …the plant does have a can-do/will-do attitude. It has showcased not only flexibility and building both light-duty and heavy-duty pickup trucks but a real ability to execute with speed. …We could sell more [pickups] than we could produce, so having the capacity at Oshawa but also showcasing the talent, the speed and the capability at that plant certainly bodes well for its future.

IS PRODUCTION OF THE BRIGHTDROP ELECTRIC VAN AT GM’S PLANT IN INGERSOLL, ONT., ON TRACK FOR DECEMBER?

The retooling is well under way and we intend to stay on track. We’re really proud as Canada becomes [home] to the first full-scale electric-vehicle plant. So we’re leading the EV future with that plant.

THE ELECTRIC CHEVROLET EQUINOX IS BASE-PRICED AT ABOUT $35,000. HOW IMPORTANT IS THIS VEHICLE?

It’s hugely important. That price point reaffirms that we’re going to have an electric vehicle for everybody over the course of the next few years.

HOW DOES GM VIEW CANADA IN THE EV WORLD?

We’re doubling down on production in North America as we transition to an all-electric future … we have some very critical manufacturing footprint here. We also have over 1,200 engineers at our Canadian Technical Centre who are working on the software and the battery controls that go into those products. So, I think we can safely say there’s a little bit of Canada in every single new vehicle that GM is building.

GM SAID IT WILL OFFER BUYOUTS TO U.S. BUICK DEALERS AS THE BRAND SHIFTS TO AN ELECTRIC PORTFOLIO. WILL THAT HAPPEN FOR CANADA?

We don’t have a plan for that right now for Buick in Canada. The makeup of our dealerships in Canada is a bit different [in that] we don’t have any Buick standalone stores. [But] if anyone wanted to raise their hand [for a buyout], that would be something that we would consider.

WILL GM CANADA RETURN TO THE AUTO SHOW CIRCUIT IN CANADA?

We’re assessing what our presence will be at auto shows. But we see value, particularly coming out of the pandemic, to get back into some of those environments where we see a lot of foot traffic, particularly… in key cities where EV adoption is on the rise. So I think we will see some presence at the auto shows with GM Canada.