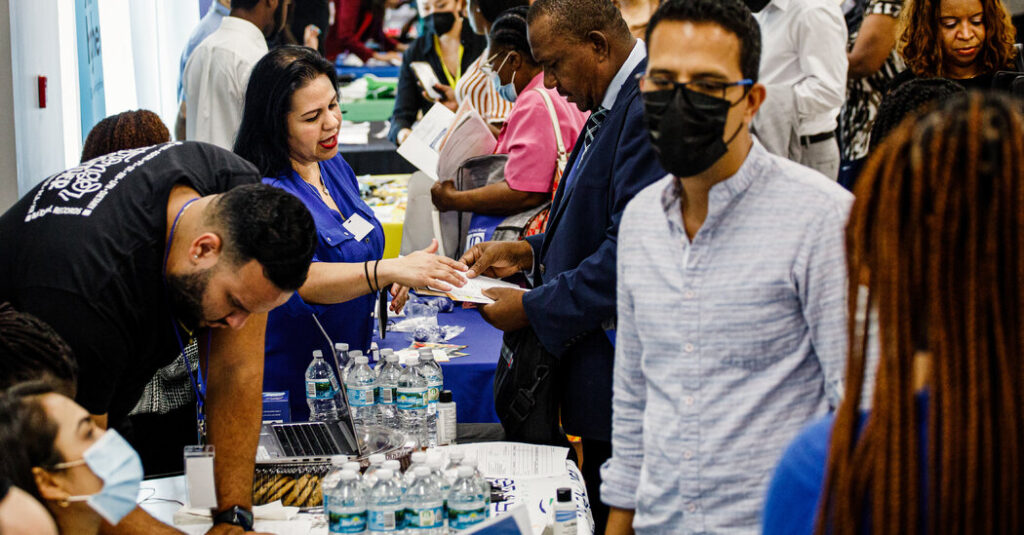 
America’s job market is remarkably strong, a report on Friday made clear, with unemployment at the lowest rate in half a century, wages rising fast and companies hiring at a breakneck pace.

But the good news now could become a problem for President Biden later.

Mr. Biden and his aides pointed to the hiring spree as evidence that United States is not in a recession and celebrated the report, which showed that employers in the United States added 528,000 jobs in July and that pay picked up by 5.2 percent from a year earlier. But the still-blistering pace of hiring and wage growth means the Federal Reserve may need to act more decisively to restrain the economy as it seeks to wrestle inflation under control.

Fed officials have been waiting for signs that the economy, and particularly the job market, is slowing. They hope that employers’ voracious need for workers will come into balance with the supply of available applicants, because that would take pressure off wages, in turn paving the way for businesses like restaurants, hotels and retailers to temper their price increases.

The moderation has remained elusive, and that could keep central bankers raising interest rates rapidly in an effort to cool down the economy and restrain the fastest inflation in four decades. As the Fed adjusts policy aggressively, it could increase the risk that the economy tips into a recession, instead of slowing gently into the so-called soft landing that central bankers have been trying to engineer.

“We’re very unlikely to be falling into a recession in the near term,” said Michael Gapen, head of U.S. economics research at Bank of America. “But I’d also say that numbers like this raise the risk of a sharper landing farther down the road.”

Interest rates are a blunt tool, and historically, big Fed adjustments have often set off recessions. Stock prices fell after Friday’s release, a sign that investors are worried that the new figures increased the odds of a bad economic outcome down the line.

Even as investors zeroed in on the risks, the White House greeted the jobs data as good news and a clear sign that the economy is not in a recession even though gross domestic product growth has faltered this year.

“From the president’s perspective, a strong jobs report is always extremely welcome,” Jared Bernstein, a member of the White House Council of Economic Advisers, said in an interview. “And this is a very strong jobs report.”

Still, the report appeared to undermine the administration’s view of where the economy is headed. Mr. Biden and White House officials have been making the case for months that job growth would soon slow. They said that deceleration would be a welcome sign of the economy’s transition to more sustainable growth with lower inflation.

The lack of such a slowdown could be a sign of more stubborn inflation than administration economists had hoped, though White House officials offered no hint Friday that they were worried about it.

“We think it’s good news for the American people,” the White House press secretary, Karine Jean-Pierre, told reporters in a briefing. “We think we’re still heading into a transition to more steady and stable growth.”

The State of Jobs in the United States

Employment gains in July, which far surpassed expectations, show that the labor market is not slowing despite efforts by the Federal Reserve to cool the economy.

The Fed, too, had been counting on a cool-down. Before July’s employment report, a host of other data points had suggested that the job market was decelerating: Wage growth had been moderating fairly steadily; job openings, while still elevated, had been declining; and unemployment insurance filings, while low, had been edging higher.

The Fed had welcomed that development — but the new figures called the moderation into question. Average hourly earnings have steadily risen since April on a monthly basis, and Friday’s report capped a streak of hiring that means the job market has now returned to its prepandemic size.

“Reports like this emphasize just how much more the Fed needs to do to bring inflation down,” said Blerina Uruci, a U.S. economist at T. Rowe Price. “The labor market remains very hot.”

Central bankers have raised borrowing costs three-quarters of a percentage point at each of their last two meetings, an unusually rapid pace. Officials had suggested that they might slow down at their meeting in September, lifting rates by half a point — but that forecast hinged partly on their expectation that the economy would be cooling markedly.

Instead, “I think this report makes three-quarters of a point the base case,” said Omair Sharif, founder of Inflation Insights, a research firm. “The labor market is still firing on all cylinders, so this isn’t the kind of slowdown that the Fed is trying to generate to alleviate price pressures.”

Fed policymakers usually embrace strong hiring and robust pay growth, but wages have been climbing so fast lately that they could make it difficult to slow inflation. As employers pay more, they must either charge their customers more, improve their productivity or take a hit to their profits. Raising prices is typically the easiest and most practical route.

Plus, as inflation has soared, even robust wage growth has failed to keep up for most people. While wages have climbed 5.2 percent over the past year, far faster than the 2 percent to 3 percent gains that were normal before the pandemic, consumer prices jumped 9.1 percent over the year through June.

Fed officials are trying to steer the economy back to a place where both pay gains and inflation are slower, hoping that once prices start to climb gradually again, workers can eke out wage gains that leave them better off in a sustainable way.

“Ultimately, if you think about the medium and longer term, price stability is what makes the whole economy work,” Jerome H. Powell, the Fed chair, said at his July news conference, explaining the rationale.

Some prominent Democrats have questioned whether the United States should be relying so heavily on Fed policies — which work by hurting the labor market — to cool inflation. Senators Elizabeth Warren of Massachusetts and Sherrod Brown of Ohio, both Democrats, have been among those arguing that there must be a better way.

But most of the changes that Congress and the White House can institute to lower inflation would take time to play out. Economists estimate that the Biden administration’s climate and tax bill, the Inflation Reduction Act, would have a minor effect on price increases in the near term, though it may help more with time.

While the White House has avoided saying what the Fed should do, Mr. Bernstein from the Council of Economic Advisers suggested that Friday’s report could give the Fed more cushion to raise rates without harming workers.

“The depth of strength in this labor market is not just a buffer for working families,” he said. “It also gives the Fed room to do what they need to do while trying to maintain a strong labor market.”

Still, the central bank could find itself in uncomfortable spot in the months ahead.

An inflation report scheduled for release on Wednesday is expected to show that consumer price increases moderated in July as gas prices came down. But fuel prices are volatile, and other signs that inflation remains out of control are likely to persist: Rents are climbing swiftly, and many services are growing more expensive.

And the still-hot labor market is likely to reinforce the view that conditions are not simmering down quickly enough. That could keep the Fed working to restrain economic activity even as overall inflation shows early, and perhaps temporary, signs of pulling back.

“We’re going to get inflation slowing in the next couple of months,” Mr. Sharif said. “The activity part of the equation is not cooperating right now, even if inflation overall does cool off.”