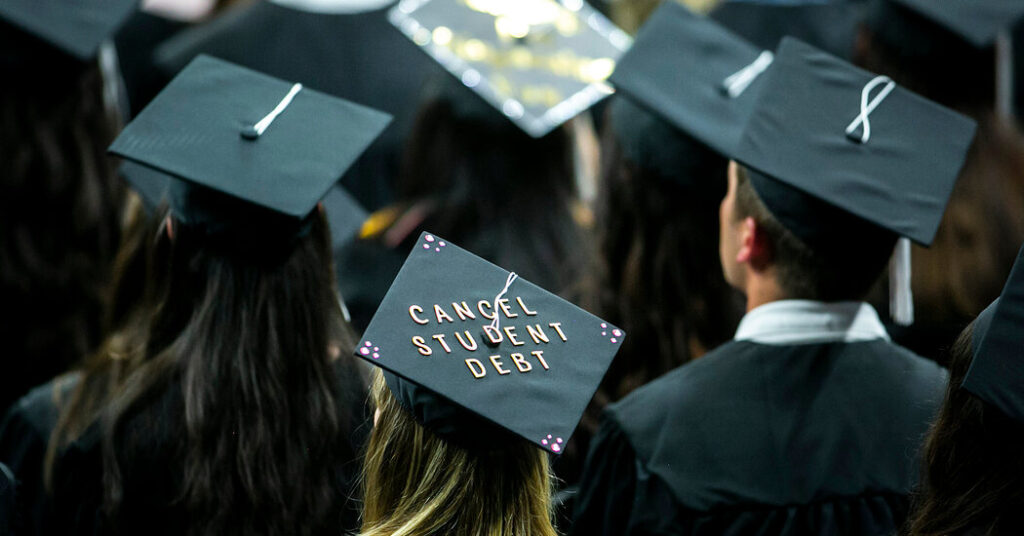 Government to Cancel $6 Billion in Student Loans for Defrauded Borrowers


Around 200,000 former students who attended schools that they said defrauded them will have $6 billion in federal loans canceled under a sweeping settlement announced on Wednesday, the latest move by the Biden administration to address the student loan crisis by eliminating some debts.

Those who applied for relief — some as long as seven years ago — will have their loans wiped out if they attended one of more than 150 schools named in the class-action settlement, nearly all of which are for-profit colleges and vocational programs. The deal reverses 128,000 denial notices — which a federal judge called “disturbingly Kafkaesque” — that were sent to relief applicants during the Trump administration.

Many of the schools included in the settlement are out of business. They include large chains like the Art Institutes and other campuses run by the Dream Center, whose operations abruptly collapsed in 2019, and those owned by Career Education Corporation. The latter, at its peak, enrolled tens of thousands of students at more than 100 locations. The deal also includes a few colleges that are still operating, including the University of Phoenix, Grand Canyon University and DeVry University.

Education Secretary Miguel Cardona called the deal “fair and equitable for all parties.”

The Education Department granted relief to applicants from the schools included in the deal “based on strong indicia regarding substantial misconduct by listed schools, whether credibly alleged or in some instances proven,” according to the settlement papers filed with the U.S. District Court for the Northern District of California. Those borrowers’ loans will be fully eliminated, and any payments they made will be refunded.

The deal, which must be approved by a federal judge, was greeted with cheers and relief by borrowers. “This is probably the sexiest thing I’ve seen in a long time!” one posted in a Facebook group. “My school listed as a bad actor and my debt will be wiped out.”

The agreement is a major step toward resolving a problem that had stretched across three presidential administrations: a glut of relief claims from students who attended for-profit schools that saddled them with large bills for a subpar education.

A state and federal crackdown a decade ago led to enforcement actions against some of the industry’s most notorious operators, pushing several prominent chains into bankruptcy. But even after the schools disappeared, the debts that their former students incurred remained.

The Obama administration tried to address the problem by updating a federal program called borrower defense to repayment, which allows those who attended schools that broke state consumer protection laws or otherwise committed serious misdeeds to have their federal student loans eliminated.

However, Betsy DeVos, the education secretary under President Donald J. Trump, froze the program, calling it a “free money” giveaway. Ms. DeVos allowed hundreds of thousands of claims to stack up; in her final year in office, officials churned out mass denials.

The Biden administration revived the borrower defense program and used it earlier this month to wipe out nearly $6 billion in loans for 580,000 borrowers who attended Corinthian Colleges, a large chain that closed in 2015 after extensive allegations of illegal recruiting tactics. It also granted borrower defense claims at half-dozen or so other schools.

But the mass denials under Ms. DeVos remained, as well as a queue of tens of thousands of pending relief applications, many of them years old. Wednesday’s deal would wipe out the denials, treating them as though they never happened. The deal also promises to resolve all applications that are not automatically granted — for those involving schools not on the settlement list — within six to 30 months.

“This momentous proposed settlement will deliver answers and certainty to borrowers who have fought long and hard for a fair resolution of their borrower defense claims after being cheated by their schools and ignored or even rejected by their government,” said Eileen Connor, director of the Project on Predatory Student Lending, which represented borrowers in the case.

Corinthian Colleges. In its largest student loan forgiveness action ever, the Education Department said that it would wipe out $5.8 billion owed by 560,000 students who attended Corinthian Colleges, one of the nation’s biggest for-profit college chains before it collapsed in 2015.

The deal’s relief is mainly limited to those who submitted a borrower defense application on or before June 22, 2022. The Education Department must now decide if it will approve future claims from students who attended the schools that it has said acted illicitly.

Mr. Biden is still mulling a larger decision: Whether to use executive action to make good on a campaign promise to cancel $10,000 in federal student loan debt for all borrowers. High inflation has intensified a debate among his advisers about the wisdom of such a move.

Theresa Sweet, one of the named plaintiffs in the class action lawsuit, said she was stunned to achieve what she considered justice after years of stress and, as settlement talks advanced, the “roller-coaster ride of feeling certain the process would fall apart.”

Ms. Sweet graduated in 2006 from the Brooks Institute of Photography, a for-profit school owned by Career Education Corporation that closed in 2016. Saddled with debt from a program that promised students lucrative careers but offered them little actual training or support, she struggled after graduation to earn a living wage.

“I hope that the experience of each and every class member will serve as proof that fighting for your rights is something you should never be afraid to do,” she said in an email. “It has been too long a road, but I think we are finally where we needed to be all along.”