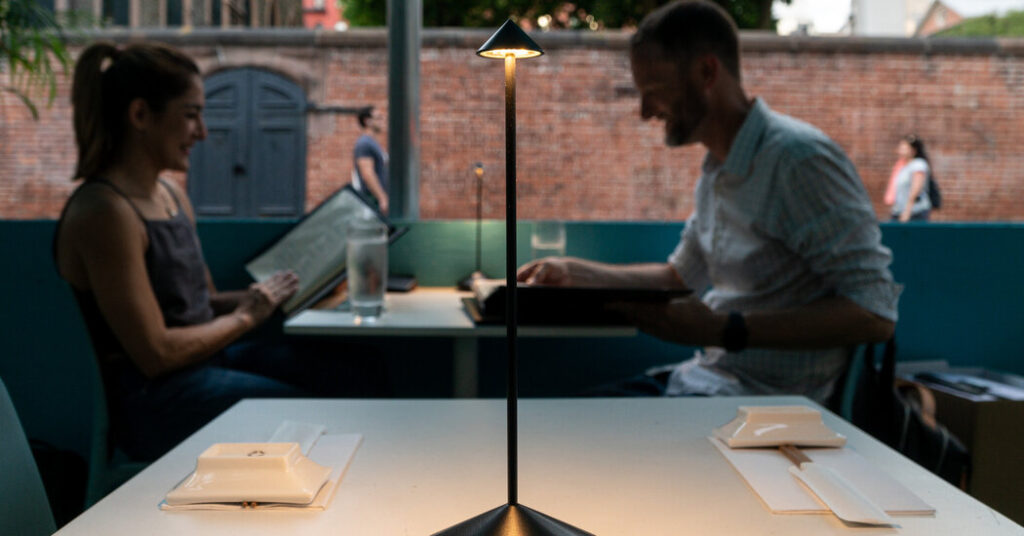 Have You Seen This Table Lamp? If You Eat Out in New York, You Will


She’s tall and svelte, with a sleek conical hat. She frequents New York City’s most coveted restaurant tables. She lights up a room.

Perhaps you’ve seen her? She’s a lamp. The Pina Pro cordless lamp from the Italian design company Zafferano, to be exact. And she’s everywhere.

In the evenings, servers at the stylish Italian restaurant Altro Paradiso, in SoHo, place Pina Pros on the tables outside, where the 14 tiny LED lights in each one cast a mellow, romantic glow over the pappardelle with duck ragù. A glow cozy enough, perhaps, to make you forget about the rat that just ran by, or the noise from the Ducati dealership across the street.

At the Dutch, a few blocks away on the corner of Prince and Sullivan Streets, the black hue of the lamp matches the columns surrounding the outdoor tables. One street over, several Pina Pros line the plant-filled dining shed at the French-Indonesian restaurant Wayan. The lamp’s list of loyalists keeps growing, mainly in Manhattan: Little Owl, Market Table, Cote, Mercer Kitchen, Vestry, Lodi, Cipriani. Brooklyn restaurants with Pina Pros include Evelina and Aurora.

“They are the most perfect model that there could be for an outdoor lamp for a restaurant,” said Lauren Miller, the director of operations for Mattos Hospitality, which runs Altro Paradiso. “They are totally user-friendly, they last a really long time, they don’t blow over,” as candles do. At $149 per lamp, they’re not cheap, but they’re rechargeable.

At Altro Paradiso, a few lamps have mysteriously disappeared, Ms. Miller said. When the restaurant didn’t yet have one for every table, “people would fight over them,” she added.

All the hubbub over a lighting source may remind some diners of the exposed-filament Edison bulb, which a decade ago became a restaurant-décor cliché.

The Pina Pro owes its ubiquity in part to the pandemic. In the summer of 2020, when New York restaurants were allowed to start outdoor service after being shut down, owners suddenly had to make dining on sidewalks and streets — amid the smells and sounds of the city — feel as intimate as dining indoors.

It was the lamp’s time to shine.

“Restaurants all over the city started putting tables out on sidewalks in the dark,” said Barrett Gross, the president of Zafferano America. “I saw this as a tremendous opportunity.”

The Pina Pro had debuted that February, a year after Zafferano had officially opened its American branch. But it didn’t sell well at first. So one night in June 2020, Mr. Gross walked around SoHo, where he lives, with two lamps in hand. He approached host stands, set the lamps down and turned them on.

At the Italian restaurant Cipriani, “one of the hosts said, ‘When can I have them?’” Mr. Gross recalled. “It was the most enthusiastic response I had ever gotten selling anything in my life.”

Once the lamps landed at a few Cipriani locations, other restaurateurs began to inquire about them, Mr. Gross said. Diners asked if they could buy the lamp on their table.

The lamp “was so good for restaurants at the time when restaurants had no idea how to serve meals outside,” said Joey Campanaro, the chef and owner of Little Owl. It provided “comfort and utility.”

“The power of light is unbelievable,” he added, “especially in a restaurant.”

More than 20,000 of the lamps sold in the past year in the United States, Mr. Gross said.

Sales grew by 910 percent from 2020 to 2021, and are on track to more than double in 2022, said Ben Austin, who runs marketing for Zafferano America. Restaurants made 20 to 30 percent of those purchases, most of them in New York. But the lamp is gaining traction in other cities, including Miami (where the white model is a favorite) and Washington, Mr. Austin said.

At several restaurants, diners can order the Pina Pro directly from their table, using QR codes placed on the underside of the lamps. The company says it hasn’t spent any money on traditional advertising.

Gianni Morsell, who was eating at the Dutch last Saturday night, said she had never seen a lamp like the Pina Pro. “I would totally buy this for my home,” she said.

KwangHo Lee, the president of the SoHo and Upper West Side locations of the Japanese restaurant Momoya, saw the lamps at the Dutch in March. He now uses them at his SoHo location, and said he won’t go back to candles, which need to be replaced and cleaned regularly.

But there will always be those who prefer dinner by candlelight. On a recent night at Altro Paradiso, Jillian McKigney switched off the Pina Pro at her outdoor table, saying it was “a little sterile.”

Her dining companion, Blair Brice, said the lamp’s tiny head and heavy base felt disproportional. She missed the yellow glow of a candle, and the way it flickers and dances. “Votives forever,” she said.