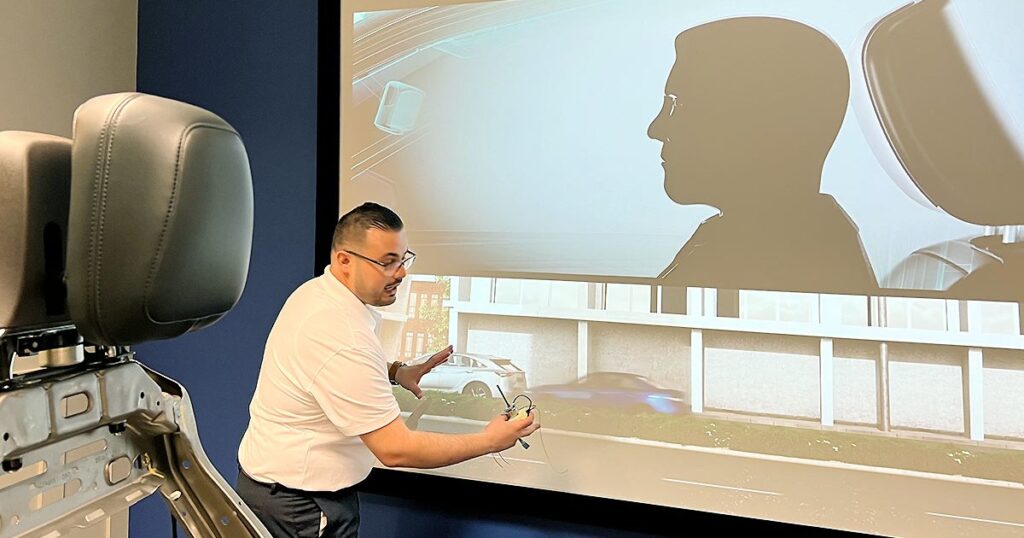 
“Our aim is to have a good summary in September of how we think the system performed,” Edwards said.

If the tests show that True Active headrests are effective in reducing whiplash injuries, IIHS would likely lobby automakers to install the systems.

Windsor Machine Group, with 2,500 employees and plants in the U.S., Canada, Mexico, China and Europe, was founded in 1946. The company makes headrests and armrests for the Detroit 3 and many other global automakers.

Ahmad Farghawi, executive vice president of engineering, said the company in 2019 thought there was potential to expand its power headrests beyond being a customer convenience feature.

“When we started developing the power headrests, we asked: ‘How can we convert them into something more intelligent or smart, something that would adjust on its own when the vehicle is in danger of being in a collision?’ ” Farghawi said.

One of the challenges Windsor engineers faced was comfort of the seat occupants. For a headrest to be effective in reducing or preventing whiplash, it has to be as close to the head as possible and as high as possible — a position many drivers find uncomfortable, Farghawi says. In fact, he says, because of a lack of comfort, the vast majority of drivers don’t keep their headrests in the best position to reduce or prevent whiplash.

But True Active headrests can solve that problem, company officials say, because the system can move the headrest up and down or back and forth, or in both directions at same time. “The radar communicates to our headrests that a collision is happening. It adjusts from whatever position the occupant has the headrest in less than a second, hopefully preventing injuries before the crash even occurs,” said Farghawi.

Windsor Machine officials demonstrated the system to automakers this past spring.

In April, they invited Ford, Toyota, Stellantis and General Motors engineers to see a demonstration. They drove close behind a vehicle equipped with the system, as if a crash were about to occur.