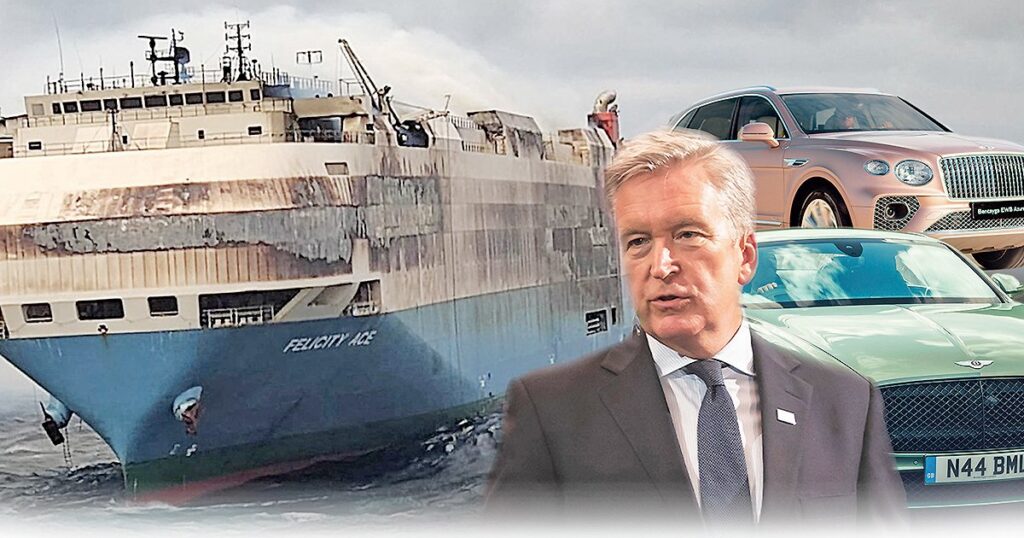 
In Crewe, Bentley CEO Adrian Hallmark and his global team quickly got to work, even as the Felicity Ace still burned, Rocco said. Bentley sold 4,212 vehicles in the Americas in 2021, so 189 represented a significant chunk of the brand’s business.

“Based on the demand situation in other parts of the world, we were able to immediately grab production slots,” Rocco said. Bentley’s global regional directors quickly crafted a replacement scheme for the brand’s biggest market. And global conditions elsewhere helped a plan come together.

“China stepped up and said, ‘We’re seeing less demand; we can help you with some cars.’ ” Rocco said. After Russia’s invasion of Ukraine, Bentley stopped imports of cars and parts into Russia. “Those order slots opened up. So we were able to react and pivot very quickly,” he said.

The Felicity Ace burned for days as rescue vessels and tugboats poured water on the abandoned hulk. On Feb. 25, with the fire finally extinguished, the first salvage crews went aboard in hopes of securing the vessel and getting it towed to a safe harbor.

Four days later, at about 9 a.m. local time March 1, the Felicity Ace, which was heavily listing to starboard while under tow, sank in rough waters about 230 miles south of the Azores. It is believed to rest some 2 miles below the surface; the final disposition of its cargo — whether it stayed within the ship or scattered across the seafloor — remains unknown.

Hallmark was unavailable to be interviewed for this article. However, by March 17, he told Automotive News that the brand already had a plan to replace the bulk of the sunken Bentaygas, Continentals, Flying Spurs and Mulliner-built coaches within six months. “We’ve promised those customers, and we’re doing some clever things with dealers to keep [those customers] mobile, which I won’t talk about,” Hallmark said then.