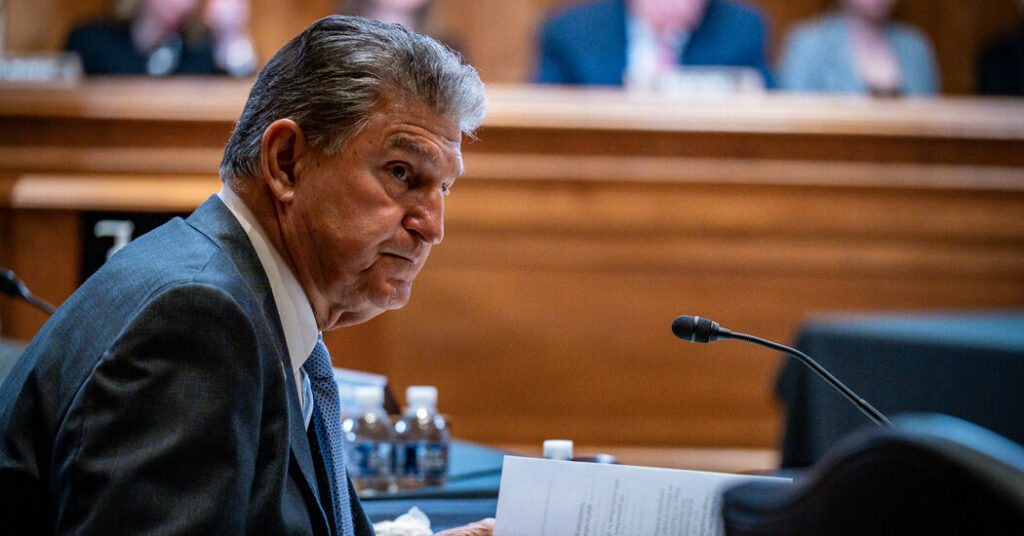 How Joe Manchin Left a Global Tax Deal in Limbo


WASHINGTON — In June, months after reluctantly signing on to a global tax agreement brokered by the United States, Ireland’s finance minister met privately with Treasury Secretary Janet L. Yellen, seeking reassurances that the Biden administration would hold up its end of the deal.

Ms. Yellen assured the minister, Paschal Donohoe, that the administration would be able to secure enough votes in Congress to ensure that the United States was in compliance with the pact, which was aimed at cracking down on companies evading taxes by shifting jobs and profits around the world.

It turns out that Ms. Yellen was overly optimistic. Late last week, Senator Joe Manchin III, Democrat of West Virginia, effectively scuttled the Biden administration’s tax agenda in Congress — at least for now — by saying he could not immediately support a climate, energy and tax package he had spent months negotiating with the Democratic leadership. He expressed deep misgivings about the international tax deal, which he had previously indicated he could support, saying that it would put American companies at a disadvantage.

“I said we’re not going to go down that path overseas right now because the rest of the countries won’t follow, and we’ll put all of our international companies in jeopardy, which harms the American economy,” Mr. Manchin told a West Virginia radio station on Friday. “So we took that off the table.”

Mr. Manchin’s reversal, couched in the language used by Republican opponents of the deal, is a blow to Ms. Yellen, who spent months getting more than 130 countries on board. It is also a defeat for President Biden and Democratic leaders in the Senate, who pushed hard to raise tax rates on many multinational corporations in hopes of leading the world in an effort to stop companies from shifting jobs and income to minimize their tax bills.

The agreement would have ushered in the most sweeping changes to global taxation in decades, including raising taxes on many large corporations and changing how technology companies are taxed. The two-pronged approach would entail countries enacting a 15 percent minimum tax so that companies pay a rate of at least that much on their global profits no matter where they set up shop. It would also allow governments to tax the world’s largest and most profitable companies based on where their goods and services are sold, not where their headquarters are.

Failure to get agreement at home creates a mess both for the Biden administration and for multinational corporations. Many other countries are likely to press ahead to ratify the deal, but some may now be emboldened to hold out, fracturing the coalition and potentially opening the door for some countries to continue marketing themselves as corporate tax havens.

For now, the situation will allow for the continued aggressive use of global tax avoidance strategies by companies like the pharmaceutical giant AbbVie. A Senate Finance Committee report this month found that the company made three-quarters of its sales to American customers in 2020, yet reported only 1 percent of its income in the United States for tax purposes — a move that allowed it to slash its effective tax rate to about half of the 21 percent American corporate income tax rate.

Not changing international tax laws could also sow new uncertainty for large tech companies, like Google and Amazon, and other businesses that earn money from consumers in countries where they do not have many employees or physical offices. Part of the global agreement was meant to give those companies more certainty on which countries could tax them, and how much they would have to pay.

America’s refusal to take part would be a significant setback for Ms. Yellen, whose role in getting the deal done was viewed as her signature diplomatic achievement. For months last year, she lobbied nations around the world, from Ireland to India, on the merits of the tax agreement, only to see her own political party decline to heed her calls to get on board.

After Mr. Manchin’s comments, the Treasury Department said it was not giving up on the agreement.

“The United States remains committed to finalizing a global minimum tax,” Michael Kikukawa, a Treasury spokesman, said in a statement. “It’s too important for our economic strength and competitiveness to not finalize this agreement, and we’ll continue to look at every avenue possible to get it done.”

The U.S. path to approving the global pact faced challenges from the outset, given Republican opposition to parts of the plan and the slim majority that Democrats hold in the Senate.

To comply with the agreement, the United States would need to raise the tax rate that companies pay on their foreign earnings to 15 percent from 10.5 percent. Congress would also need to change how the tax is applied, imposing it on a country-by-country basis, so that companies could not lower their tax bills simply by seeking out tax havens and “blending” their tax rates.

The Biden administration had hoped to enact those changes through its stalled Build Back Better legislation or a smaller spending bill that Democrats hoped to pass through a budget process that would not require any Republican support.

“Secretary Yellen and her team have always been making the case that they will be able to secure the changes they need,” Mr. Donohoe said in an interview in June. “Secretary Yellen again made the case for all of the work they have underway to try to secure the votes that they needed for this change within the House of Representatives and the Senate.”

Congress would also have to revise tax treaties to give other nations the power to tax large U.S. multinationals based on where their products are sold. That legislation would require the support of Republicans, who have shown no inclination to vote for it.

American technology giants such as Google and Amazon have largely backed the proposed tax changes as a way to put an end to the complex thicket of European digital services taxes that have been enacted in recent years. If the agreement unravels, they will face with a new wave of uncertainty.

The entire project has been on shaky ground in recent months amid ongoing opposition in the European Union, delays over technical fine print and concerns whether the United States would actually join. Nevertheless, it remains possible that the European Union and other countries will still move ahead with the agreement, leaving the United States as an awkward outlier from a deal that it revived last year.

“With or without the U.S., there does seem to be a very significant chance that that architecture will be stood up,” said Manal Corwin, a Treasury official in the Obama administration who now heads the Washington national tax practice at KPMG. “Once you get a few countries that make those first moves, whether it’s the E.U. or some other critical mass, I think you’ll see others follow pretty quickly.”

That poses risks for U.S. companies, including the chance that their tax bills could go up, given an enforcement mechanism the Treasury Department helped create to nudge reluctant countries into the agreement. If the United States doesn’t adopt a 15 percent minimum tax, American companies with subsidiaries in participating countries could wind up paying penalty taxes to those foreign governments.

“If Congress doesn’t adopt, that doesn’t prevent the European Union and Japan and others from moving forward in this area, at which point, I think Congress would see it’s in the U.S. interest to adopt, because otherwise our companies will also get hit by this enforcement principle,” Kimberly Clausing, who recently left her job as Treasury’s deputy assistant secretary for tax analysis, said at a Tax Policy Center event last month.

Barbara Angus, the global tax policy leader at Ernst & Young, said the failure of the United States to comply with the deal would have “significant implications” for American companies.

“For this framework to work as it’s intended, there really does need to be consistency and coordination,” Ms. Angus, who is also a former chief tax counsel on the House Ways and Means Committee, said.

The Treasury Department could not provide an estimate for how much additional tax American companies would have to pay to foreign governments if the United States is left out of the global agreement. If fully enacted, the agreement is projected to raise about $200 billion of tax revenue for the United States over a decade.

Pascal Saint-Amans, director of the center for tax policy and administration at the Organization for Economic Cooperation and Development, said that he thinks the European Union will find a way to move beyond member state opposition and that, once it ratifies that agreement, the United States will come under pressure to join.

“Once E.U. has moved, U.S. has the following choice: Either they move or they leave the taxing right on U.S. multinational enterprises to the Europeans,” Mr. Saint-Amans said in a text message. “Even the Republicans would not let this go.”

For now, Republican opposition to the tax deal seems unlikely to bend. Lawmakers have complained for the last year of being excluded from the international negotiations and assailed Ms. Yellen for giving foreign countries new powers to tax American companies.

“The world should know that despite what the Biden administration is pushing, the U.S. is not going to surrender economically to our foreign competitors by raising our global minimum tax rate based on an agreement that is neither enforceable nor complete nor in our interest,” said Representative Kevin Brady of Texas, the top Republican on the House Ways and Means Committee. “Congress will not ratify an O.E.C.D. deal that cedes our constitutional authority to set tax rules or fails to protect key U.S. tax incentives.”

Mr. Brady, who will retire at the end of his term, added: “There’s little political support for an agreement that makes the U.S. less competitive and surrenders our tax base to foreign competitors.”