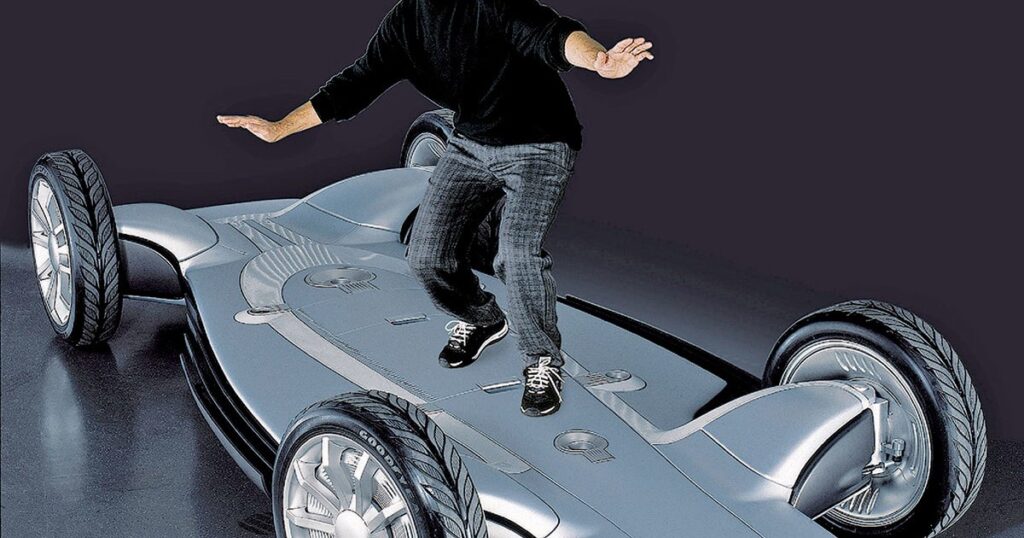 How the EV skateboard chassis was born


“Chris Borroni-Bird [GM’s former director of advanced technology vehicle concepts] and I had a discussion around what we were calling design and technology fusion. There were things designers wanted to do that they couldn’t because they were limited on technology, and there were things technologists knew of that designers weren’t aware of that could make a difference.

“The blending of technology and design was an exciting idea. I attribute a lot of that thinking to Chris, without question. I had him take on a number of projects in the design and technology fusion arena with the intent of trying to come up with a bold statement: what the future of the automobile might be given the technology that exists today and the issues that we were facing.

“I empowered Chris to start work on this subject, and through that process, and because Rick wanted to make a profound statement at the auto show, the skateboard concept started to emerge. Certainly, the first concept put in front of me didn’t look like [GM’s skateboard concept] AUTOnomy. The skateboard came about through the natural creative process of a bunch of people trying to tell a story about reinventing the automobile.”

Burns credits Scott Fosgard, who handled communications for R&D, as helping come up with thinking of the flat-floored wheeled chassis as a skateboard. When the time came to sell the idea to the GM board — and to create promotional materials for the media — Fosgard had Burns stand on milk crates behind the AUTOnomy. From that, GM created a photo illustration showing Burns in a classic sidewalk surfer pose, crouched slightly, arms outstretched as if riding GM’s skateboard chassis into the future.