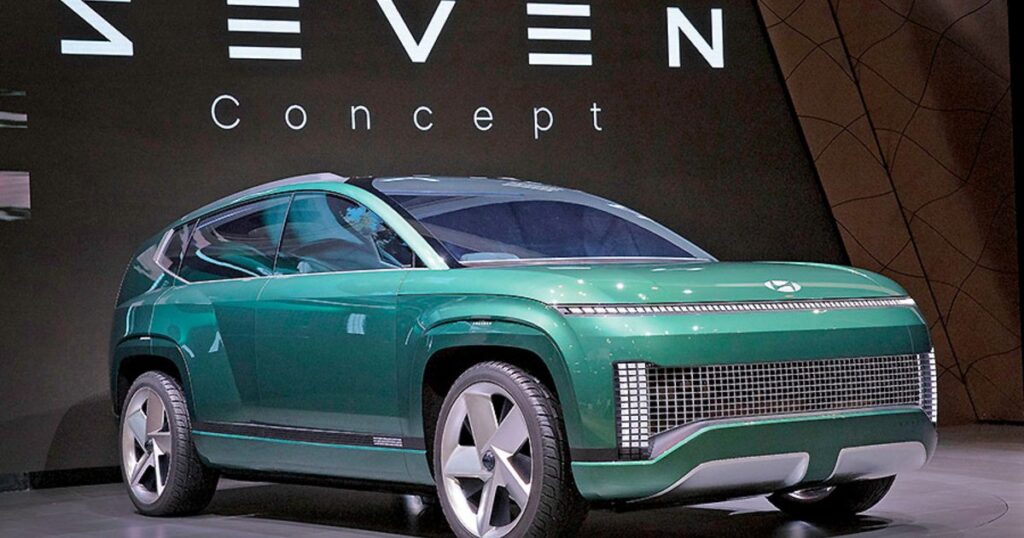 
Palisade: The three-row kid hauler debuted for the 2020 model year, replacing the Santa Fe XL in the lineup. It shares the Kia Telluride’s 3.8-liter V-6 and offers 291 hp and 262 pound-feet of torque.

For 2023, the Palisade gets a freshen that includes an exterior face-lift with a sportier grille, headlights and wheel designs, reconfigured interior with higher-quality materials and tech enhancements as well as expanded safety features and a new more aggressively styled XRT trim. All-wheel-drive models now get a Tow function alongside the Normal, Sport and Smart modes.

The 2023 Palisade went on sale in July. A redesign is expected in the first half of 2025, likely designated as a 2026 model. A hybrid powertrain or a turbo four-cylinder option could be offered.

Santa Fe: The fourth generation of the midsize crossover debuted for the 2019 model year, and a freshen for 2021 added a hybrid and plug-in hybrid model to the lineup as well as a top-shelf Calligraphy trim. For 2022, Hyundai slotted the XRT trim into the middle of the lineup (gasoline variants only), which offers more rugged styling elements such as a black grille, skid plates, side steps and 18-inch dark alloy wheels.

For 2023, the fourth generation of the midsize Santa Fe crossover carries over but for a few safety and convenience tech upgrades on lower trims. A redesign is expected in 2024.

Tucson: The fourth generation of Hyundai’s top-selling compact crossover was redesigned for the 2022 model with sportier looks, larger dimensions, a hybrid and plug-in hybrid option, an N Line appearance package and a rugged XRT to match the Santa Fe. Overall styling changes lean sportier on the new model.

For 2023, the new Tucson carries over with some shifting of equipment on some trim levels. A freshen is expected in 2024.

Venue: The Venue is Hyundai’s smallest crossover and will replace the Accent as Hyundai’s entry vehicle when sales of that subcompact sedan end next year. The Venue debuted in 2020 and carries over unchanged for the 2023 model. A freshen is expected in early 2023. But the future is uncertain for the Venue beyond 2026 because its place in the lineup could go to the Ioniq 3 electric subcompact crossover. The Venue’s fate hinges on whether EVs are adopted in mass volume by U.S. consumers.

Kona: Hyundai’s other pint-size crossover, which offers three gasoline variations and an electric model, is on tap for a redesign for its second generation in the second half of 2023. That follows the significant freshen it received for the 2022 model, which sharpened its looks and added a performance-oriented N variant powered by a 276-hp turbo 2.0-liter inline-four cylinder. It’s likely the Kona Electric will continue into the model’s second generation.

Sonata: The eighth-generation midsize sedan, which offers a gasoline and hybrid variant, launched in the 2020 model year with significant styling changes. For 2023, all versions of the Sonata carry over. The car is expected to get a freshen in 2025, but it’s possible that the current generation will be its last.

Elantra: The compact sedan was redesigned for the 2021 model year with a longer wheelbase, wider stance and lower roofline, as well as a hybrid powertrain and a 201-hp N Line model. A track-ready, 286-hp N variant joined for 2022. For 2023, the Elantra carries over primarily unchanged, but for a few tweaks, including the discontinuation of the manual transmission option on the N Line. A redesign for Elantra is expected in the second half of 2025.

PrevPreviousWhy Dodge is holding on to roar in EV era
NextGenesis future product: A new cachet with EVsNext