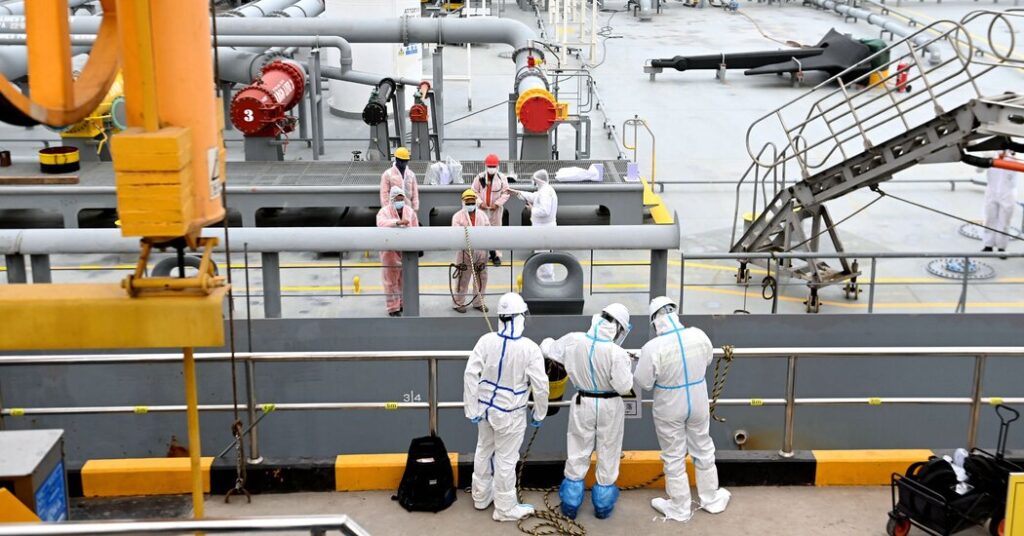 In Russia’s War on Ukraine, China and India Emerge as Financiers


As Russia tries to break the stranglehold of sanctions, China and India are emerging as Moscow’s pivotal financiers by purchasing large amounts of Russian crude, putting themselves in the middle of the messy war with Ukraine and a geopolitical standoff with the West.

It’s a complex calculation for China, India — and the global economy.

But undercutting European and American efforts to isolate the Kremlin risks serious diplomatic fallout that neither country wants. China has avoided overtly supporting Russia’s war in public statements, and India has portrayed itself as neutral.

The two countries, with the demand from their enormous domestic markets and the supplies from their vast refineries, are also central in determining the direction of oil prices. Their purchases of Russian crude in recent months have helped ease the pressure.

Their ultimate appetite for Russian oil will either shake or support the global economy, another complicating factor in the West’s capacity to stay united through a war of attrition in Ukraine. So far, the West has remained steadfast in its commitment to Ukraine, but a long period of high fuel prices and potential shortages in Europe could become politically unpalatable.

“One of the consequences of this conflict is a fundamental realignment of the global energy system, trading relationships and geopolitical alignments, with China and India more closely aligned with Russia,” said Jason Bordoff, who is director of Columbia University’s Center on Global Energy Policy and was an adviser to President Barack Obama.

Russia’s biggest export, oil is the currency of war, funding the bullets and rockets deployed on the battlefield in Ukraine. The West is trying to cut off the financial spigot, in part by weaning Europe, Russia’s biggest market, off its energy dependence through sanctions.

Four months into the war, Russian crude oil exports are down only slightly, as sales to China and India have largely filled the gap left by Europe. India and China bought roughly 2.4 million barrels of Russian crude a day in May, half of Russia’s exports. At least some is being refined into diesel and other fuels, and exported around the world, including to countries that oppose the invasion.

China and India have been buying at a 30 percent discount to the global benchmark price, a boon to both economies in a world buffeted by rising inflation. Despite the discounts, Russia’s oil revenues are growing, since prices have climbed to more than $100 a barrel.

The shift is just beginning, and the amounts of oil involved are still relatively small. The real test of China’s and India’s willingness to buy Russian oil will come when sanctions take full effect.

The European ban on tanker deliveries of Russian crude and refined fuels like diesel will be phased in over the next six months, trade that represents two-thirds of the continent’s purchases from Russia.

“The dominoes will accelerate in 2023 once the European ban is in place,” said Sarah Emerson, president of ESAI Energy, a research firm.

The world’s largest oil importer, China has played a major role in global energy markets for decades, largely depending on the Middle East and Russia for supplies.

With the United States growing increasingly self-sufficient for its energy needs, the arrangement meant that the American Navy patrolling the Persian Gulf was effectively protecting Chinese supply lines. China got its oil without immersing itself in messy Middle Eastern politics, while its trade with the United States increased.

It is trying to do the same now, in balancing its economic and geopolitical interests. Importing more Russian oil not only is cheaper, but also helps diversify supplies.

“China’s conduct has been consistent with its longstanding national security objectives,” said David Goldwyn, the senior State Department energy diplomat in the first term of the Obama administration. That is, he said, “diversifying supply away from the Middle East, prioritizing transportation routes which cannot be blocked by the U.S. Navy and containing Russia by increasing its dependency on China as a primary buyer of oil and gas, all at the lowest possible cost.”

This pattern played out during Russia’s takeover of Crimea in 2014. As the West imposed sanctions on Moscow, President Vladimir V. Putin of Russia flew to China to strike a natural gas deal that had been in the works for a decade. China negotiated a hard bargain for cheap gas, frustrating Western efforts to isolate Moscow but without endorsing the takeover of Crimea.

Since Russia’s invasion of Ukraine, China has walked a fine line, at least publicly. China’s state-controlled media and government officials have been silent on Russian oil, and Chinese oil companies have followed the same cautious script.

There may also be limits to China’s appetite. China has traditionally tried to ensure a multitude of energy sources. And its relationship with Russia has long been uneasy, despite the vow by Chinese leaders of a “no limit” friendship.

“There are no limits in China-Russian cooperation, but there is a bottom line,” Qin Gang, China’s ambassador to the United States, said in a television interview in March. “The bottom line is the universally recognized international law and norms governing international relations.”

India’s switch to Russian oil has been swift and significant.

Before the Ukraine war, Russia accounted for about 1 percent of India’s oil needs. Russia is now poised to overtake Iraq as India’s primary source of oil this month, according to Kpler, a commodity data company. Russian exports to India will reach 1.15 million barrels a day in June — up from 33,000 barrels a day last year and about 600,000 in March — while Iraq deliveries will drop to just over a million barrels a day, Kpler data show.

To the government of Prime Minister Narendra Modi, sufficient supplies of cheap fuel will help tackle inflation and prevent the kind of widespread shortages that have incited violence and political change in nearby Sri Lanka.

India’s foreign minister, S. Jaishankar, has repeatedly defended the country’s strategy against mounting criticism from Western countries. He said Western sanctions on Iran and isolating policies toward Venezuela had left India with fewer options as energy prices continue to climb.

“They’ve squeezed every other source of oil we have and then say, OK, guys, you must not go into the market and get the best deal for your people,” Mr. Jaishankar said. “I don’t think that’s a very fair approach.”

With robust refining capacity of five million barrels of fuel a day, India could absorb an additional 350,000 barrels of Russian oil, or roughly a third more than it is currently importing, according to energy experts. India has already stopped buying oil from Mexico, slashed purchases from Nigeria and pulled back from Saudi Arabia and the United States.

“A new alignment of world politics is unfolding across the globe that is being drawn with oil and gas,” said Daniel Yergin, author of “The New Map: Energy, Climate, and the Clash of Nations.” “And China and India are very much at the center of it.”

The Russian oil gradually flowing into Asia is replacing Saudi and other Middle Eastern oil, which is now finding its way to Europe. The shift is creating heightened competition among members of the Organization of the Petroleum Exporting Countries, with Iraq slashing prices to Europe.

Saudi Arabia and its gulf allies have viewed Asia as their growth market, and suddenly they are finding themselves elbowed aside. Russia and Saudi Arabia, the main players of OPEC Plus, the expanded version of the cartel, have worked together to control supplies and bolster prices in recent years. Russia may need to be careful not to depend on Asia too much, though its options are limited.

“Russian displacement of Saudi crude in the Chinese economy could create strains in OPEC Plus,” said Meghan L. O’Sullivan, director of the Geopolitics of Energy Project at the Harvard Kennedy School and a former aide to President George W. Bush, “making the Saudis more willing to take steps that would harm Russian interests, and bring down the global price further.”